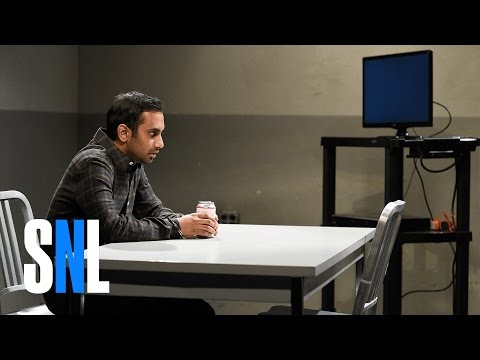 As the first Saturday Night Live host of Trump's America, Aziz Ansari was tasked with addressing this week's inauguration and the days to come. He was funny, sincere, and critical when he took the Studio 8H stage, sending an appropriately strong message to the racists who've come out of the woodwork since the election.

But the comedian's monologue wouldn't be his only instance of brutal honesty.

Sitting handcuffed and confused at an interrogation table, Ansari later found himself having to tell two passionate pop-culture cops (Cecily Strong, Beck Bennett) why he wasn't obsessed with La La Land. The movie was good, but it dragged, had way too many montages, and the singing wasn't amazing, his character said, touching on many of the quibbles that have made the Golden Globe-winning musical a lightning rod for contention this awards season. Also: "It's a whole movie about jazz, and there's no black people in it."

Roll the clip above to see Strong and Bennett's Damien Chazelle super fans try not to explode -- and don't even get them started on the perfection that is Westworld.