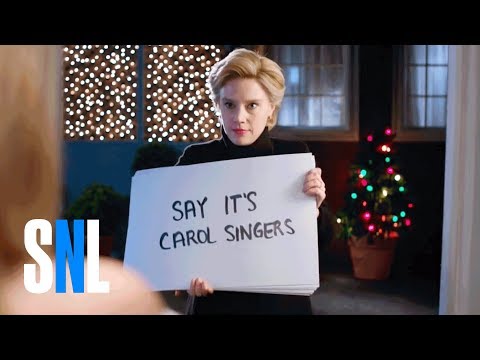 Saturday Night Live did not stand idly by in the wake of Donald Trump's win over Hillary Clinton in this year's heated presidential election. The sketch show that, only one year before, wrangled the future president-elect as host, was now on the attack, a muckraking comedy weapon in a fight against Trump. Too little too late? It'll be a debate for years to come. But we're all getting some funny sketches in the process.

On an episode that gave us a scathing spoof of Trump's relationship with Russian president Vladimir Putin and a Run-DMC rap farewell to Barack Obama's eight-year run, SNL squeezed in what would likely be the last appearance from Kate McKinnon's Hillary Clinton. In the sketch, the political hopeful appears at the front door of an Electoral College voter, begging for reconsideration in this high-stakes round of ballot-casting. Her tactic: the word cards from Love Actually.

Oddly enough, on last season's Amy Adams episode, SNL writers staged a similar Love Actually send-up. The sketch was cut for time, leaving room for this weekend's political take. Could this version make a real impact? We'll find out if SNL can bring the laughs and the change when the final tally on Electoral College votes is announced this week.

Matt Patches is Thrillist’s Entertainment Editor. He previously wrote for Grantland, Esquire.com, and Vulture. Find him on Twitter @misterpatches.
Thrillist TV
History of
The History of the McRib