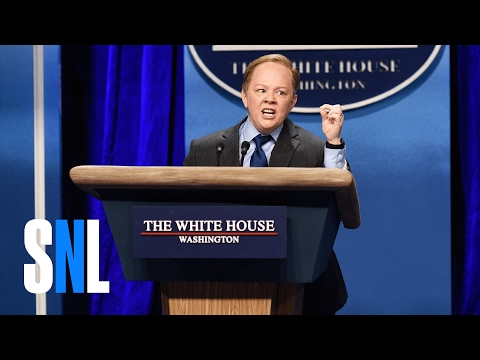 Thus far, 2017 White House press conferences have been marked by meltdowns, alternative facts, and instances of general confusion. In other words, nobody should have been surprised that Saturday Night Live was planning to come for Donald Trump's press secretary, Sean Spicer, this weekend. That should have been a given. The thing that wasn't a given? The performer behind the Spicer makeup.

But in the middle of last night's show, which had host Kristen Stewart slaying left and right, Melissa McCarthy revealed that she'd been tasked with the job, greeting the Studio 8H audience with a pinstripe suit, a runaway hairline, and her loudest inside voice. What followed was an impersonation in league with Alec Baldwin's Trump, a pitch-perfect portrait of a gum-swallowing man child who just wants his country's press corps to report a fucking win for his boss.

"I know that myself and the press have gotten off to a rocky start -- when I say 'rocky start,' I mean it in the sense of Rocky the movie, because I came out here to punch you. In the face. And also, I don't talk so good," she said. "I'm going to begin today by apologizing on behalf of you to me, for how you have treated me these last two weeks. And that apology is not accepted."

Over eight minutes, the sketch ripped into Spicer's salty and patronizing relationship with White House political correspondents (played by Stewart, Bobby Moynihan, Cecily Strong, Vanessa Bayer, Alex Moffat, and Mikey Day), featured an appearance by Kate McKinnon as secretary of education nominee Betsy DeVos, made room for prop comedy, and turned the phrase "your word" into a refrain. Kyle Mooney also found himself locked in a cage, making for a moment almost too ominous to enjoy. And McCarthy ended the sketch in exaggerated, perfect fashion: using the podium as a weapon.

It was a lot to digest.

Those clamoring for Baldwin's return as Trump got their wish, too. For the cold open, SNL rolled every bit of recent presidential news into one steady stream of zings, anchored by Steve-Bannon-as-Death: 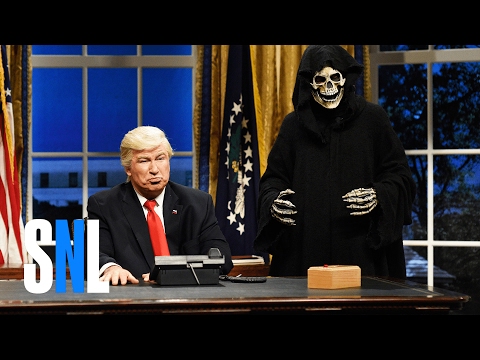 The only thing the night was missing? Dippin' Dots.