For a certain generation, Alvin Schwartz and Stephen Gammell's trilogy of horror storybooks hold a special chill. Even the covers of Scary Stories to Tell in the Dark stoked fear in the heart when they were whipped out by that one proto-goth preteen at every sleepover who would insist on making everyone look at the ghost drawing in the middle of "The Haunted House." They're the kind of books you would hide under your sleeping bag until the parents turned in for the night, unsure if they'd be deemed TOO scary. Most of the stories in the books weren't actually that scary, many of them ending with funny stage directions like "(Turn to one of your friends and scream:) 'AAAAAAAAAAAH!!'" -- it was the illustrations that made them so, simple drawings rendering even the most mundane tale into something out of H.P. Lovecraft's nightmares. The best parts of Andre Øvredal's new film adaptation make use of those legendary drawings, bringing Schwartz and Gammell's most frightening stories to life. If only that's all it did.

Where Scary Stories and its sequels were simply collections of stories and urban folktales, the film adaptation takes an approach that film adaptations of books like this have tended to take (see: Goosebumps). Instead of creating an anthology storybook film of a few disconnected tales, the Scary Stories movie embeds them all in a single narrative arc that overcomplicates things and is, ultimately, a distraction from what makes the movie actually fun to watch.

The year is 1968, for some reason, and young teen Stella (Zoe Colletti) breaks into her small town's resident haunted house with her friends after escaping a group of high school bullies. Stella, an aficionado of horror stories, relates the urban legend of Sarah Bellows, who was kept prisoner in the depths of the house generations ago by her rich family because of some deformity or difference she had as a child. Tumbling into Sarah's musty bedroom, Stella steals her book of scary stories, which she used to frighten the children who would come visit her. The book, they discover, writes stories all by itself, á la Tom Riddle's diary in Harry Potter and the Chamber of Secrets -- stories that come to life and menace the inhabitants of their town. 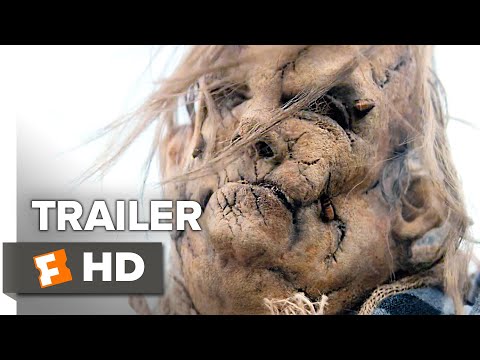 The stories themselves introduce horrific monsters like Harold, the mush-faced scarecrow, who switches places with a young boy (from the story "Harold"); an enormous pale woman with black hair who slowly chases a kid through a hospital ("The Dream"); and a collection of arms and legs that assembles itself into a manlike creature who shouts "ME TIE DOUGH-TY WALKER," and gallops across lawns and into houses on its hands and feet (from "Me Toe Dough-ty Walker," kind of). They're wonderful, all mostly prosthetics and bodysuits and makeup (that's the magic touch of writer Guillermo del Toro, who has long championed the use of practical effects in the digital age), and they'll make you wish that's all this movie is.

The film makes a point, rightly, of faithfully taking much of its more horrific imagery from Stephen Gammell's illustrations in the books, recreating a few of his most iconic panels. The Pale Lady is a standout, shuffling her large body forward on her little feet, curling her fingers, and beatifically smiling. ("Isn't she beautiful?" del Toro asked the audience at a footage presentation a month before the movie's release.)

Øvredal (Trollhunter, The Autopsy of Jane Doe) is a great director of suspense, steeping every scene of terror in a great mix of dread and sick anticipation. By the time the movie gets to classic zit-horror "The Red Spot," you're cringing at the thought of what could possibly hatch its way out of there. Scary Stories doesn't pull punches with its more horrifying scenes either, a fine line to toe in a PG-13 movie marketed to children. (Since seeing it, I've caught myself staring off into space, thinking about clumps of crackling straw erupting out of a character's mouth and ears.)

That's perhaps why Øvredal and del Toro felt the frame narrative was necessary; at least not every scene has something frightening in it, you have some characters to root for, and the film ends on a hopeful, humanitarian note, as well as a lesson against telling some horror stories. But that's exactly what was so chilling about the books: There is no neat, happy, sensical ending, there is no equation or solution to fight off the dark creatures that come at night. The best part about finishing a scary story is wondering if the monster might be still out there, waiting in the dark for some doomed soul to gobble up its big toe.