Television fans who tuned in to watch the 2017 Emmy Awards probably expected plenty of jokes at President Donald Trump's expense, and maybe even a heartfelt acceptance speech criticizing the Commander in Chief, a la Meryl Streep. What virtually no one expected was an appearance by a former employee of the Trump administration, let alone the much-maligned and Melissa McCarthy-parodied Sean Spicer.

The currently unemployed press secretary, who got off to a rocky start in his previous position by adamantly claiming that the 2017 presidential inauguration was the most-watched election in history, despite visual and ratings evidence to the contrary, made a surprise appearance to poke fun at his truth-shifting reputation. Host Stephen Colbert called attention to Donald Trump's well-known affinity for television, before making a joke that he was probably watching, since the ratings for the Emmys would be so high.

How high? Enter Spicer, chased by the ghost of his cynical past. With a wry smile and cutaways to a confused, somewhat horrified Melissa McCarthy, Spicer's visage appeared onscreen. Yes, Spicer confirmed in an echo of his infamous press conferences, this would be the most-watched Emmy Awards around the world, like, ever. 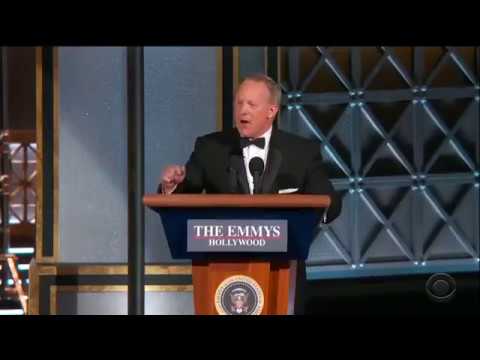 In case you were confused by the message, we are supposed to laugh at a man who explained to the world that Hitler never really used chemical weapons on his own people, told the public obvious lies about Trump's inauguration, or, more generally, accepted a job that would require him to defend xenophobia and explain away Trump's distaste for reading pesky things like proposed laws.

Anthony Schneck is an Entertainment Editor at Thrillist. Follow him @AnthonySchneck.