Netflix's latest animated project Seis Manos, the brainchild of Powerhouse Animation Studios CEO Brad Graeber and executive producer and co-creator Alvaro Rodriguez, is a frenetic, action-packed adventure that the creators cheekily refer to as a "Mexicanime," combining the best of '70s Westerns, exploitation flicks, and martial arts epics. Peppered with brutal violence, uneasy partnerships, and likeable characters -- voiced by a cast that includes Danny Trejo, Mike Colter, and Mexican telenovela star Angélica Vale in her first English-speaking role -- it's a creative melting pot of culture and pulpy action that you’ll be glued to from the first episode onward.

Powerhouse, the Texas-based studio that made a name for itself with Netflix's short but sweet 2017 Castlevania series, gets a chance to stretch its wings with this latest project, adopting a similar aesthetic and set of adult themes. Spanning two seasons so far, Castlevania was packed tightly with whip-smart writing that was personable, mature, and true to its source: the lore woven throughout the vampire-centric Castlevania video games. Seis Manos, a collaboration between the anime-focused Viz Productions (Naruto, Bleach), is proof positive that Powerhouse is more than adept at creating shows with memorable storylines and characters from their own original ideas. 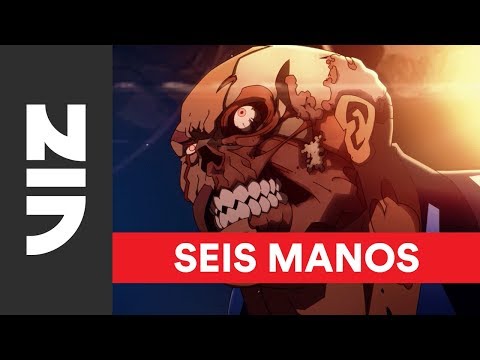 Set in the modest fictional border town of San Simon, Mexico, Chinese martial artist and devout Daoist Chiu (Vic Chao) has been raising and training three orphans in his own home. While their ages aren’t discussed specifically, they seem to have grown into young adults after Chiu took them in as children, which we see in flashbacks.

There's the strong-willed yet empathetic Isabela (Aislinn Derbez); the jovial, gentle giant Jesus (Jonny Cruz); and the rage-filled Silencio, whose sinister past has stripped him of the ability to speak or easily trust others. Over the trio's formative years, they've spent hours learning from Chiu, their mentor, and honing their individual combat styles alongside him. Silencio practices Bak Mei, Isabela sharpens her Hung Gar, and Jesus works to better himself with drunken boxing.

When a young boy named Domingo sneaks into Chiu's camp and meets up with Isabela, Silencio, and Jesus, the trio's idyllic life takes a darker turn. Just as they're welcoming him into their fold and considering training him as they were, bloodthirsty, ghoul-like beings invade San Simon. Domingo accompanies his newfound friends as they engage in battle, but is (quite shockingly) killed during the melee.

While the trio are off working to try and stop the creatures, who appear to have gone berserk, a few slip off and slaughter Master Chiu at his camp and leave a brutal bloodbath in their wake throughout the town. Following the attack, Isabela, Jesus, and Silencio must pick up the pieces left behind by Chiu's death and decipher his connections to the man at the center of it all: El Balde (Trejo), the cartel kingpin who's been pulling the strings behind the monsters -- and apparently everything else.

That's easier said than done, of course, but they're not fighting alone. With an American FBI agent Brister (voiced by Luke Cage himself, Mike Colter) and Garcia (Vale), a police officer hot on the trail of the cartel and criminal underlord at the center of it all, someone's bound to get to the bottom of the mystery thrust upon them before any more lives are lost. With troubled pasts of their own, the orphan trio must confront their own demons and learn to lean on each other as Master Chiu taught them so that they all may stand. Or, at the very least, stop squabbling and put their talents to use as a group.

Each episode has a hint of the fantastical: a "weeping" statue that appears to cry "tears" that, when ingested, makes you a berserker-type beast, for example. There are shamans that can flash you back to the Vietnam War with a single touch, a skill that aids our heroes in figuring out who was behind the San Simon massacres. There are disembodied fingers, dogs that beef up into monsters, and nightmares that feel so present and real they haunt the characters. Otherwise, Seis Manos is mostly grounded in a semi-realistic setting that makes the first half of the season feel as though this is a hero's journey that could actually happen -- without all the magical realism, of course. By the time you cross the halfway point, though, Seis Manos is so entwined in its mysticism, straddling the worlds of the living and the dead, to the point that the story couldn't possibly resolve without our leads embracing the otherworldly tools at their disposal. At right about that turning point, even the skeptical Brister admits, "Well, shit, I guess magic is real."

Following Chiu's death, the episodes delve into philosophy straight from the Dao, paired with gorgeous style-breaking sequences, as our heroes' mentor knew it, as well as the teachings and values that martial artists seek to instill in their pupils. That's how learning about Chiu's potential involvement in the town's monstrous massacres is only the tip of the iceberg when it comes to the eight-episode season's twisty storytelling, though nothing ever comes without at least a little foreshadowing. Following the breadcrumb trail is half the fun; the rest is taking in the good old-fashioned pulp and action unfold, rooting for the underdog orphans to prevail.