Why 'Sausage Party' Is the Filthiest, Foodiest Cartoon Ever

Seth Rogen and his longtime comedic cohort Evan Goldberg spent 10 years trying to make their first animated comedy, Sausage Party. It would not surprise me if the gestation process dated back their middle-school lunch line. Starring Rogen as Frank, a talking hot dog, Kristen Wiig as the bun of his dreams, Michael Cera as a wiener, and Edward Norton as a shvitzing bagel, Sausage Party is hard-R junk food masquerading as quiet family dinner.

The movie is a dream come true for Rogen and Goldberg, but is it for you? To find out if what's on the menu is for you, ask yourself these questions:

First, shouldn't you be at camp? Second, this movie is not for you. Rogen and Goldberg worked with veteran animators to give Sausage Party the Pixar flavor, but it is by no means a G-rated recipe. The movie is ruder, cruder, and more disturbing than anything the pair could get away with in live-action. On top of patented shit-talking, Rogen slathers on mayhem. Sausage Party mushes up hot dog characters so their meaty entrails splatter across the screen -- a foodie version of Saving Private Ryan with foul language. If you're a fresh-faced child or mildly perishable, Sausage Party may spoil you. 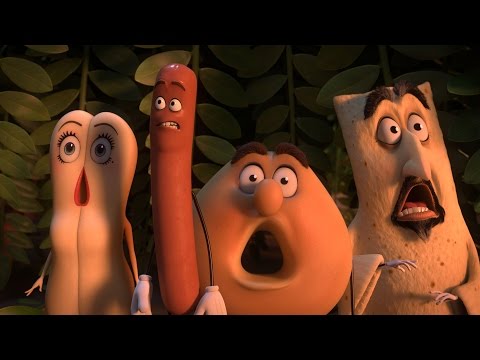 The story Rogen and Goldberg cooked up for their cartoon is simple and perverse. Like a majority of kids' movies from the last decade, Sausage Party tracks the characters' journey from a foreign world to their home aisle. The meat of the movie is a series of encounters with different food groups, peppered with food puns and ham-fisted emotional revelations. The concept's shelf life will fluctuate depending on a taste for USDA Prime DUMB humor. The main villain of Sausage Party is a (literal) douche with 'roided arms who "juices" up by murdering juice boxes. Funny? You're in.

Do you want to see anthropomorphic foods have sex with each other?

Let's just say a taco and a hot dog bun is enough to make a sandwich.

Can you stomach vegetables hidden in your dessert?

Sausage Party wants to be a little healthy. Like their previous film This Is the End and this summer's Preacher, Rogen and Goldberg position each food group as an individual and warring religion. The bagels are Jewish. The pita bread is Muslim. Rogen's talking hot dog is a Christian-turned-atheist looking to stir the pot. A piece of chewed gum is the Stephen Hawking stand-in, the only person who understands the reality of this cruel existence (i.e., we all end up in the cushions of a hungry stoner's couch). Rogen and Goldberg explore ideology the way Emril Lagasse seasons soup. The ingredients for something special are there, but Sausage Party never intends to be the haute satirical cuisine of South Park, and it could grate on those who just want dumb fun.

How do you feel about this still from the movie?

Sausage Party is a movie where bottles of tequila speak with Mexican accents. Rogen and Goldberg also try to skirt politically correct attacks by making fun of people who'd think bottles of tequila speaking with Mexican accents is kosher in today's climate. Buy it or not, identity humor is Sausage Party's backbone and most polarizing gimmick. To describe the image above: "Mr. Grits" refers to himself like Sidney Poitier in In the Heat of the Night; the Firewater speaks like a Native American wiseman and smokes from a kazoo peace pipe; the Twinkie is gay. So there you go.

Do you occasionally partake in controlled substances that melt you into giggling euphoria?

By Rogen's own account, Sausage Party is the product of a night of heavy smoking. There may be a right way to see this animated comedy, which may give the straitlaced a case of the LOL munchies.