'She Dies Tomorrow' Perfectly Captures the Horror of Existence

Amy Seimetz's film is almost too accurate for these times.

The strains of Mozart's Requiem in D Minor, K 626 repeat throughout She Dies Tomorrow, Amy Seimetz's new must-watch psychological horror film available on VOD and select drive-in theaters. Even if you don't know the name of the piece, you probably know the music. It's a menacing mass that the composer left unfinished before his death. It just sounds like the end.

Amy (Kate Lyn Sheil) keeps replaying the requiem as she wanders around her house in the movie's opening scenes, convinced that the next day she is going to die. It scores her movements as she guzzles wine, caresses the walls, and picks out a shimmering dress to wear during her final hours. The hum of the orchestra is relentless and macabre. The repetition is anxiety-inducing. She Dies Tomorrow is built on this terrifying existential dread, which is all too recognizable these days.

Read anything about She Dies Tomorrow and you'll find some mention of how it's eerily perfect for the current moment. It's a movie ostensibly about mortality, but more accurately about fear and how it's its own sort of virus. The plot is relatively simple: Amy, for reasons she never fully explains, is convinced she's going to die. She calls her friend Jane (Jane Adams) and describes her premonition. Jane attributes Amy's paranoia to an alcoholic relapse, and writes it off, but then, alone in her basement, huddled over a microscope, Jane starts to experience the same fear. It's contagious. 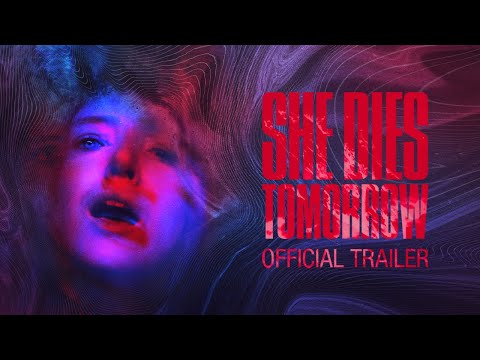 The narrative eventually leaves Amy and traces the chain of her disease as it spreads to Jane's family members and beyond. When the prophecy infects people, they go into a trance, indecipherable words chanting as neon lights flash, painting their agonized faces. Through flashbacks, we see where Amy contracted her horror, but it's never defined as any specific monster. It's just an airborne terror, seeping into willing minds. The world Seimetz creates is one that turns progressively more surreal. It's an echo of our own that slowly grows more foreign. It's also often absurdly funny, like a Tim & Eric sketch with an operatic bent.

Seimetz, who doesn't appear in the film, is probably most recognizable to audiences from her roles in blockbusters like Alien: Covenant and the recent Pet Sematary remake, but she's made her mark behind the camera on projects like the television adaptation of Steven Soderbergh's The Girlfriend Experience, which she co-wrote and directed. She Dies Tomorrow is one of those pieces that feels like an extension of its creator's psyche. It's not autobiographical certainly -- even though she did name her protagonist after herself and shot it in her own home -- but it is personal, like an open wound.

I was supposed to see She Dies Tomorrow at a screening in New York on March 12, organized in lieu of a SXSW premiere after the festival was canceled due to coronavirus concerns. I didn't end up going to see the movie that night out of fear of contracting COVID, a choice which in retrospect was probably good for multiple reasons. Not only was I happy that I didn't risk exposure, watching it now I'm not sure I would have been able to handle She Dies Tomorrow's particular brand of terror. Even so, watching it in my home felt like letting a curse in my door.

During the early days of quarantine, I felt like my brain was coated in a film that prevented me from thinking clearly and dwelling on anything but contamination. This movie accurately represents how obsession with doom can numb people, allowing only glimmers of their humanity to seep through as they long for love and companionship in what they believe to be their final moments. But Seimetz does not leave her audience without any catharsis. She Dies Tomorrow is as much about death as it is about the pain of existing with death on the horizon and the communality of that experience. We're all not okay -- but we're also doing our best to cope.