The 'Shrek 2' Soundtrack Is Absolutely Better Than the 'Shrek' Soundtrack

I'm accidentally in love with this album and will always defend it over the original's. Fight me.

Grace Han/Thrillist
Welcome to Shrek Week, Thrillist Entertainment's celebration of all things Shrek. Here, our writer discusses the iconic music of Shrek and its sequel. Also check out our Shrek rewatch and chat about whether the movie holds up 20 years later, and keep checking back all week to fulfill all your Shrek needs.

Before I went to my first sleepaway camp for kids who liked to do extra school at the age of 11, my parents let me pick two CDs to buy. One of my choices was Nelly Furtado's debut album, Whoa, Nelly! The other was Shrek: Music from the Original Motion Picture. That entire summer, when not listening to "I'm Like a Bird," I had the Shrek soundtrack on repeat. I got homesick to Rufus Wainwright's version of "Hallelujah" and jammed out to "All Star." I even had a whole routine parodying the album's worst track, Leslie Carter's "Like Wow!"

When Shrek 2 came out in May 2004, I was already aging out of the franchise's key demographic. I was about to start high school, and in a month, Garden State would take the title for my favorite movie alongside The Graduate. (I was really mopey.) Yet I was still enough of a kid that I eagerly saw Shrek 2 and bought the soundtrack. Though the movie itself was a rehash of the themes of the first and the schtick on screen was already starting to grow weary, the soundtrack, which features the likes of David Bowie, Tom Waits and Nick Cave, matured along with me. 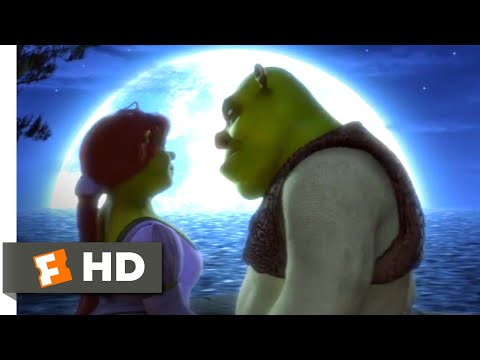 The Shrek 2 soundtrack follows a successful strategy established with the Shrek soundtrack: lead off with a pop hit from a dorky band. In Shrek 2's case, that's "Accidentally in Love" by Counting Crows, a significantly less annoying song than Smash Mouth's "All Star." The song plays over the opening sequence as Shrek and Fiona frolic on their honeymoon, yet it wasn't the producers' first choice. When the artists behind their first pick didn't allow their song to be used, the producers put out a call for a replacement with the idea that it should sound vaguely like Weezer's "Island in the Sun," according to the Los Angeles Times, and Counting Crows came through. Make fun of Adam Duritz all you want, but the man knows how to write a perfectly pleasant track.

Elsewhere, Eels—a band that should probably be more associated with Shrek than Smash Mouth—contributed their lullaby-like "I Need Some Sleep," following up on "My Beloved Monster" from the first go-round. Dashboard Confessional threw on a selection from their seminal emo album A Mark, a Mission, a Brand, a Scar. Both Tom Waits and Nick Cave appear in "cameos" in the movie, thus offering up two of their most medieval sounding songs, "Little Drop of Poison" and "People Just Ain't No Good."

But where Shrek 2 really excels is in its covers. The biggest coup was getting Bowie himself to jump on a rendition of "Changes" with the Australian singer Butterfly Boucher, but the producers also enlisted Pete Yorn for a version of the Buzzcocks' "Ever Fallen in Love" and Frou Frou for Bonnie Tyler's "Holding out for a Hero," performed on screen by Jennifer Saunders' Fairy Godmother. Frou Frou, made up of Imogen Heap and Guy Sigsworth, was the undeniable champion of 2004 soundtracks; their hit "Let Go" anchors Garden State's as well.

The first Shrek compilation was overwhelmingly, almost aggressively, upbeat. The second has a cooler tenor. It's a little moodier, perfect for someone who was, like me, entering teendom. It was also a gateway drug. I wouldn't say I was a kid with bad music taste, but it was largely limited at the time to Broadway cast recordings and folk music that my parents liked from the '60s and '70s. The Shrek 2 soundtrack sent me down rabbit holes of Bowie and Waits and Cave and the Buzzcocks. I dug into Pete Yorn's catalogue, and embraced Imogen Heap. If you decided, like I usually did, to skip the in-movie tracks buried at the end of the soundtrack, among them the Antonio Banderas–Eddie Murphy team-up for "Livin' La Vida Loca," you had a funny, weird collection of mostly downer songs, plus Lipps Inc.'s "Funkytown."

For the purposes of this piece, I rewatched Shrek 2 and found that I remembered very little of its plot. Shrek and Fiona go to her hometown of Far Far Away and meet her parents, including her disapproving father voiced by John Cleese. Shrek takes a potion to become a human and ends up looking like a cut Wreck-It Ralph. Eventually everyone learns about accepting each other for who they are. Even if the specifics of its facile plot eluded me, I still found myself wanting to dig out my long-discarded CD and return to an old favorite, but thankfully, there's Spotify.