Skip to main content
Design by Grace Han for Thrillist

Welcome to Shrek Week, Thrillist Entertainment's celebration of 20 years of Shrek. So far, we've rewatched the movie to see how it holds up in 2021, we've defended the Shrek 2 soundtrack, we've discussed the "what if?" scenarios that would have completely changed Shrek, and we've looked at the wildest Shrek merch and the best Shrek quotes. Here, we examine how a funny kids' movie about an ogre became fodder for so many NSFW memes.

In mid-April, the singer Lil Nas X tweeted a mashup of Donkey and Sonic the Hedgehog with the comment: "Thoughts?" Lil Nas X happens to be very famous now but before achieving global success he was just a kid on Twitter. That is to say: It makes sense that he'd be into weird Shrek memes.

That same day, I interviewed journalist Ryan Broderick about this topic and he mentioned that one of his favorite pieces of art that he's come across in his years of investigating Shrek's online existence also relates to a crossover with the Sonic universe. "[It] is a really emotional comic that someone drew that shows Shadow the Hedgehog using the Chaos Emerald to go on a date with Shrek," he said.

Shrek, the movie, is an important cultural document that heralded the arrival of CGI animation as a dominant medium and essentially forced the Oscars to create its Best Animated Feature category. Online, Shrek has long provided source material for memes and artistic expressions, but the internet love for the movie's actual substance has, by far, been overshadowed by the seemingly unquenchable joy of reinterpreting Shrek, often in explicit, NSFW ways. A lot of it is truly fucked up. Some of it is just absurd.

Shrek memes are a result of capitalism

"There's this late-stage capitalism expressed via Shrek marketing and Smash Mouth and memes about it," says Broderick, who is the author of the Garbage Day newsletter and the former host of the Internet Explorer podcast. "It all connects in this weird way that isn't totally articulated."

Broderick first started observing Shrek memes around 2008, and believes the phenomenon grew out of a wave of early 2000s nostalgia and the intensity of DreamWorks' advertising for the franchise, which was still ongoing at that point. (Shrek the Third came out in 2007, followed by Shrek Forever After in 2010, not to mention the Shrek spinoff Puss in Boots in 2011.) "There is an inherent surrealism and warped-ness to culture when it gets too heavily marketed, and I think memes are a really useful way to process those feelings," he says. He also has a theory that Shrek is part of a long-held tradition of popular green memes, among them Kermit and Pepe the Frog.

If the initial wave of Shrek-related content was a way of making fun of the movie, along with Smash Mouth's "All Star" for being, well, bad, the newer memes, Broderick observes, are about Shrek being, well, good. "Like, we finally got enough distance away from the insane marketing to be like, this movie is pretty good," he says. A viral list on the movie review site Letterboxd, for example, catalogues "Films where the main character visits his partner's parents house for the first time, only to realise they are racists who have hatched a plan to have a white guy steal their identity." The only two entries are Get Out and Shrek 2.

Political reporter Ashley Feinberg, who has written for Slate and HuffPost and now runs a Substack called Trashberg, is essentially famous online for sending her friends photos of naked Shrek. She has no real emotional connection to the movie, and probably first became aware of the meme when the explicit "Shrek Is Love, Shrek Is Life" blew up on 4chan in 2013. "If I had to guess," she says, "the most likely scenario was I saw a photo of Shrek holding his extremely hard erection with a serious look on his face and thought it was very funny and sent it to half my phone book and the response I got was one of horror and disgust and that was all the encouragement I needed to keep going." 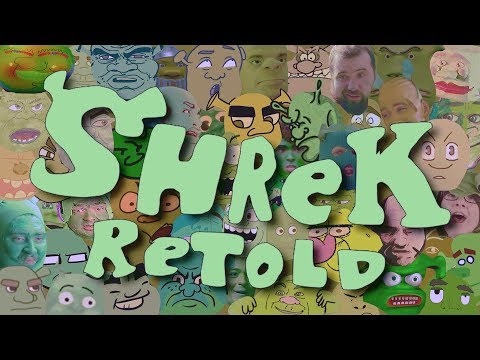 Shrek memes are the result of absurdity

Before filmmaker Grant Duffrin started the annual live event Shrekfest in 2014, a friend sent him a Facebook page for an event with the same name. It was happening about an hour away from where he lived and he was excited. But as it turned out, the listing was just a joke. So Duffrin decided to make Shrekfest an actual thing.

As the founder of the annual event and the brains behind Shrek Retold, a shot-for-shot remake of the movie made by a collection of internet artists, Duffrin gets asked a lot about Shrek memes. He says that he doesn't really seek out the meme culture around Shrek, even though it finds him. "I get when people say Shrekfest is a meme festival," he says. "I accept that. But that's not the vibe we go for. The vibe that we go for is like—I don't know—it's just a party. I like to think [of it as] if your grandparents tried to show you a Shrek-themed birthday party but they didn't know what Shrek was."

But even if Duffrin professes not to be that into Shrek memes, he always engaged with Shrek on an absurdist level. He was making a YouTube video prior to the founding of Shrekfest when one of his friends suggested the villain should be Shrek. Why does Shrek have this staying power? Duffrin has no idea. "He just works," Duffrin says. "It's a good movie." He's now working on Shrek 2 Retold.