How far would you go to get a pair of your dream sneakers?

“Nobody wants to watch a TV show about sneakerheads.” Yes, that’s an actual quote said by by the main character of Sneakerheads, Netflix’s new sneaker-obsessed series. Consisting of only six 20(ish)-minute episodes, the Complex Networks production helmed by showrunner Jay Longino is one of Netflix’s more condensed offerings as of late, and contrary to the aforementioned quote that playfully taps at the fourth wall, its premise is more than deserving of an audience. Situated around Devin (Allen Maldonado) and his derailing re-entry into sneaker culture, Sneakerheads is a comedic depiction of how ridiculous the world of sneakers can get, from release-day desperation and the truly evil resale market to styling and customization.

Devin, a survivor of the financial trappings of the sneaker game, falls into a $5,000 mound of shit when an innocent trip to purchase his all-time favorite pair of Jordans reunites him with his ex-best friend Bobby (Andrew Bachelor, a.k.a. King Bach), who for all purposes should be regarded as the true villain of Sneakerheads. After two episodes of painfully witnessing Bobby’s guidance lead Devin’s life astray, we're presented with the true adventure that Season 1 of Sneakerheads is built upon: a hail-mary attempt to get their hands on an insanely rare pair of (fictional) grails. 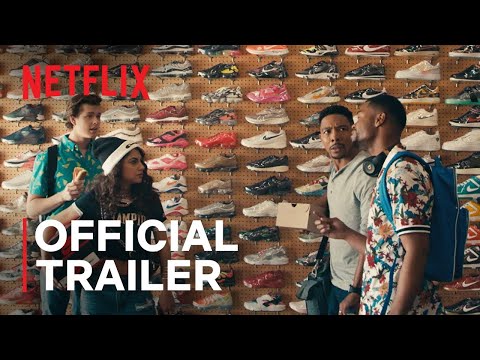 Doing whatever it takes to secure a limited pair of sneakers is something that sneaker enthusiasts of any age can relate to, but Sneakerheads isn’t just a show for a niche audience of footwear fanatics. By positioning Devin as someone that the game has left behind, uninformed viewers can learn the ropes of sneaker culture as he becomes reacclimated to it as well. Things quickly get pretty outrageous, but the exaggeration is welcomed. The true nature of resellers -- and to be clear, this is aimed at all of you who spend release days racking up on pairs just to pose with towers of shoe boxes behind you and resell them for $10 over retail -- is far more uninteresting, so the unreasonable escapades that the characters embark on were creatively a great call. The result is a funny-enough comedy that puts some of the world’s most coveted sneakers on full display. Parra Air Max 1s, Travis Scott Air Jordan IVs, Red October Air Yeezy 2s, Nike Mags, Off-White Air Jordan 1s, and several other beloved kicks make appearances, leaving one to gawk in amazement at all the (very expensive) sneakers shown on screen.

Where Sneakerheads unfortunately falls flat, however, is the lack of portrayal of adults who sensibly participate in sneaker culture. Contrary to the show’s storyline, every shoe that releases doesn’t put interested buyers in impossible positions, so one can responsibly age as a sneakerhead without the looming threat of losing everything financially and ruining interpersonal relationships. Yet, as already expounded upon, Sneakerheads flourishes in the most ridiculous pockets of sneaker culture, so don’t go into it expecting anything less.

Within a mere two-hour binging session, Sneakerheads takes viewers on an outlandish journey that covers ground at Boston cult sneaker store Flight Club, Uncle Paulie’s Deli, Mark Wahlberg’s mansion, and Hong Kong; it also features cameos from celebrities such as Lil Rel, Jon Buscemi, Jerry Ferrara, Nick Young, Jason Mark Angsuvarn, and, hilariously, Mark L. Walberg (rather than Funky Bunch Walhberg). Such a massive scope for such a minute series is captivating, but the ending of Sneakerheads doesn’t justify the means it took to get there.

All of the embarrassingly terrible decisions and impulses that were foreshadowed to surely pay off in the end left a majority of the show’s plot unresolved. After failing to make it out of the financial hole that they dug themselves into in the first episode, Devin and Bobby -- who appears to possibly be transitioning into his proper role as an antagonist -- are once again at odds, and Devin remains $5,000 in debt.

Perhaps Maldonado’s character was right in the season finale: Adults running around Los Angeles to locate a pair of sneakers may not be a point of interest for many people just scrolling through Netflix’s latest programming (though, based on its post-weekend debut positioning in the streamer's Top 10, maybe the topic isn't so niche after all). However, Sneakerheads -- and all of its unimaginable scenarios, surprisingly funny moments, and true appreciation for a culture that has become a world-wide phenomenon -- has the potential to change that.

Joshua Robinson is an Atlanta-based contributor for Thrillist whose progress on this piece was halted because he, like Maldonado’s character, was way too focused on buying a pair of sneakers to add to his collection. Follow him on IG at @roshjobin.