When 'SNL' Was Obsessed With O.J. Simpson

Saturday Night Live and O.J. Simpson have a storied history together. Much like its more serious media counterparts, SNL covered O.J.'s murder trial with obsessive detail back in 1994 and 1995, unleashing countless Court TV parodies and decimating O.J. so ferociously on Weekend Update that anchor Norm Macdonald ultimately got fired for it (more on that in a bit).

But SNL's relationship with "The Juice" stretches back way before he became a national pariah, starting with a 1978 hosting stint at the tail end of his NFL playing career. In advance of Ryan Murphy's must-watch American Crime Story: The People v. O.J. Simpson, premiering next week, we revisit Saturday Night Live's fascination with one of our legal system's most infamous criminal defendants.

While it seems bizarre in hindsight, Orenthal James Simpson was a beloved cultural figure during and in the years immediately following his NFL career. Having him host an episode was a no-brainer. During the not-unfunny episode, he memorably dons a conehead and also plays the brother of John Belushi's iconic samurai, Futaba, in a sketch that also parodied Saturday Night Fever. Hulu subscribers can watch this bizarre moment of pop-culture history in full here.

The first of SNL's many sketches about O.J.'s murder trial featured the defense and prosecution bickering over what kind of pizza to order -- a perfect parody of the nit-picky infighting and petty disputes that would characterize the proceedings. The sketch also introduced the cast members who would play key characters going forward: Michael McKean as defense lawyer Robert Shapiro, Laura Kightlinger as prosecutor Marcia Clark, David Spade as star witness Kato Kaelin, Mike Myers as Judge Lance Ito, and Tim Meadows as both O.J. and accomplice A.C. Cowlings (which gives you a pretty good sense of the racial diversity of SNL's cast at the time).

Another Court TV parody, this time featuring Marisa Tomei as her My Cousin Vinny character, Mona Lisa Vito, who impresses Judge Ito with her testimony about the white Ford Bronco.

The trial also offered the perfect excuse for Dana Carvey to bust out his seminal Johnny Carson impression, in this sketch that imagines the late night host joining O.J.'s "dream team" of high-powered defense lawyers.

SNL went into such forensic detail with their trial parodies they even had a sketch lampooning Judge Ito's convoluted and often seemingly arbitrary process of allowing or disallowing evidence. Note: This was Mike Myers' last SNL episode, and the last time he donned the robes of Lance Ito.

Here, a field trip to see where O.J. lived devolves into a wild kegger (which, based on accounts of the trial, is not all that far from the real defense team's attempts to manipulate jury members).

Professional freeloader Kato Kaelin was one of the most colorful characters to come out of the Simpson trial, so naturally SNL had a lot of fun with him. Here's a "Weekend Update" segment featuring Kaelin (David Spade) giving court testimony, which mostly involves talking about his Talk Soup ratings and doing his impression of a dog barking.

After senator Alfonse D'Amato caused outrage by making fun of Judge Ito using a racist mock-Asian accent, the judge shot back -- well, his SNL counterpart Mark McKinney (taking over for Myers) did -- by dissing Italians and busting out an impression of D'Amato's sister having sex with a mule.

As we saw with Mona Lisa Vito and Johnny Carson, the O.J. trial was repeatedly used as a character showcase for different guests and cast members. In this sketch, guest host (and former SNL cast member) Damon Wayans reprises his homeless-guy-who-lives-in-a-box character, Anton Jackson, from In Living Color. 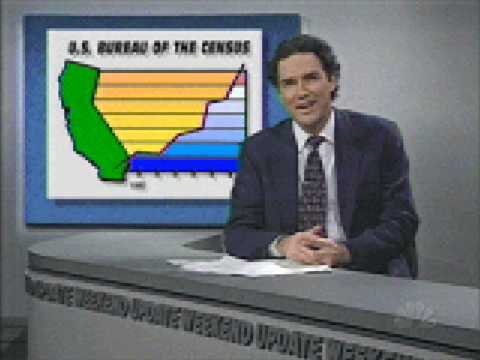 The controversial "Weekend Update" host was known for his vicious treatment of O.J., refusing to mince words about Simpson's alleged guilt. (As he famously joked after the acquittal came through: "Murder is now legal in the state of California"). But not everyone enjoyed Macdonald's regular targeting of O.J.; in fact, it is widely speculated (and also widely denied) that Macdonald's O.J. jokes played a major part in his 1998 dismissal from SNL, courtesy of NBC West Coast president Don Ohlmeyer, a close friend of Simpson's.

One of SNL's best O.J. sketches took place after the trial ended, depicting the recent exoneree making lots of murder-related innuendo while doing sideline commentary at an NFL game, including spelling out "I did it" while diagramming plays. It's particularly prescient, considering that O.J. would later pen a book titled If I Did It.

Throughout the trial, the lawyers themselves were just as fascinating -- if not more fascinating -- than the people on the witness stand, and SNL frequently capitalized on the media frenzy surrounding the lawyer's personal lives. This sketch has 20/20's Barbara Walters (Cheri Oteri) quizzing prosecutor Christopher Darden (Tim Meadows) about his salacious relationship with co-counsel Marcia Clark (Nancy Walls).

O.J.'s legal troubles continued even in the wake of the murder trial. Predictably, SNL stayed on the case, and parodied O.J.'s lack of knowledge about African-American culture in this sketch about his custody battle with his ex-wife's in-laws, with SNL's ultimate Simpson-basher, Norm Macdonald, doing the cross-examination.

Tim Meadows repeatedly shouts "Show me the money!" in this sketch that aired after O.J. was found guilty in the civil suits against him. It's especially eerie now, given that the quip was first uttered in Jerry Maguire Cuba Gooding Jr., who plays O.J. in American Crime Story.

SNL had an impressive ability to get mileage out of Tim Meadows' impression even when O.J. wasn't front page news. In one of the first "Weekend Update" segments following Macdonald's removal from the anchor's desk, O.J. weighs in on the case of Ted Kaczynski, aka the Unabomber.

In which Meadows' O.J. swings by the Bill Clinton impeachment hearings to give some testimony, because why not?

In 2004, O.J. (played by Finesse Mitchell) appeared on "Weekend Update," along with fellow accused murderers Phil Spector (Fred Armisen) and Robert Blake (Darrell Hammond), to confess to his crimes -- almost.

O.J.’s legal tribulations continued to be a boon to SNL even up into the late 2000s. When O.J. (now played by Kenan Thompson) was charged with robbery in 2008, SNL made light of the challenges of finding non-biased jurors to adjudicate the case, as even an alien, a man locked in a bunker for decades and a woman raised by wolves know about Simpson's past misdeeds.

Anna Silman is a staff writer at Thrillist and an alum of Salon and Vulture. She is an SNL junkie and an O.J. trial junkie in equal measure. Find her on Twitter: @annaesilman.