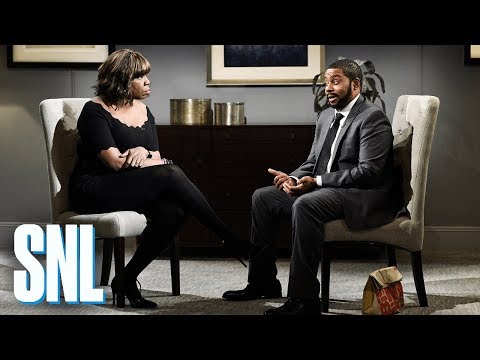 It's been a long time since Saturday Night Live has started a show with a non-political cold open -- probably since, say, sometime in 2016. In lieu of the standard "Donald Trump headline of the week" formula that has defined the show over the past three years, SNL turned to another bit of news that gripped the public's attention last week: Gayle King's interview with a completely unhinged R. Kelly, who's been accused of various sex crimes throughout his career.

If you haven't seen the original interview, it's a disturbing, albeit worthwhile, watch. Kelly shrieks, cries, and repeatedly denies every accusation leveled against him, all of which have been brought back into the light thanks to the Lifetime docuseries Surviving R. Kelly. The March 9 episode of SNL, hosted by Idris Elba, saw an opportunity it couldn't resist.

As with most of the show's best headline-based sketches, Leslie Jones and Kenan Thompson (playing King and Kelly, respectively) didn't have to do much to turn an outrageous interview into comedy. In fact, given the serious nature of the interview and the utter surrealism that characterized Kelly's behavior, SNL almost had to tone it down. Thompson repeated R. Kelly's claims of being the real victim, of McDonald's being his favorite restaurant, of not knowing which camera is on him, all of which appear in some form in the actual interview. The only embellishments added were Thompson's digressions into a Trapped in the Closet-style R&B narrative, and at one point Thompson reminds the audience: "I gave you all the clues!" Maybe one day we'll learn that where there's smoke, there may just be fire. Especially if the smoke's been around for decades.