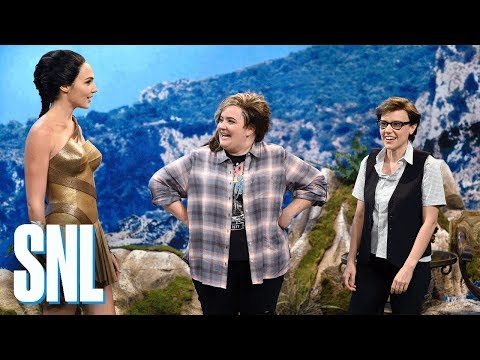 Saturday Night Live/YouTube
Make sure to check out our running list of The Best SNL Sketches of 2017.

With Gal Gadot as its host, Saturday Night Live couldn't resist spoofing Wonder Woman. Near the end of last night's show, two voyagers (Aidy Bryant, Kate McKinnon) lost at sea docked at Themyscira, wondering if they had found more of their kind.

Her character was hoping to address the gay subtext of the movie's all-women island, but to her disappointment, no hands went up. Instead, the Amazon warriors unintentionally teased their visitors with compliments and shows of wrestling.

Sensing the letdown, Gadot offered to kiss one of them to see if it made her feel anything. McKinnon volunteered as tribute, a nice callback to earlier in the show, when, during Weekend Update, Pete Davidson lobbied for more airtime and a chance to kiss the host.