"Oh my god, they're gonna make a movie about this." 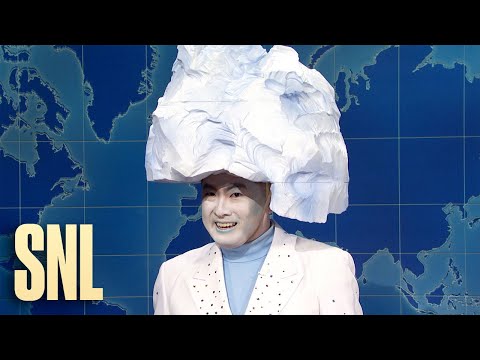 The sinking of the Titanic is one of history's most fascinating and shocking disasters, the subject of countless documentaries, books, conspiracy theories, and one of the most popular movies of all time. But never have any of those ever considered the iceberg's point of view—until now. This week's Saturday Night Live, hosted by Oscar-nominated Carey Mulligan, invited the iceberg himself, played by SNL MVP Bowen Yang, to chat with Colin Jost on Weekend Update, but the absolutely hilarious segment did not go as either of them planned.

"I am here to promote my album," the iceberg, dressed in a sparkly blazer and blue turtleneck, explained, when it became clear that all Jost wanted to discuss was that unfortunate incident with that ship that one time. How rude.

"First of all, you came to where I live and you hit me!!!" the iceberg said. "I turn around and half my ass is GONE, which is my best feature."

He continued to mount a pretty good defense for himself, explaining that he was long gone by the time all those people perished: "What did the autopsy say? The iceberg did it? No, they drowned, bitch. That's not me, that's WATER." Hmm. He makes a good point.