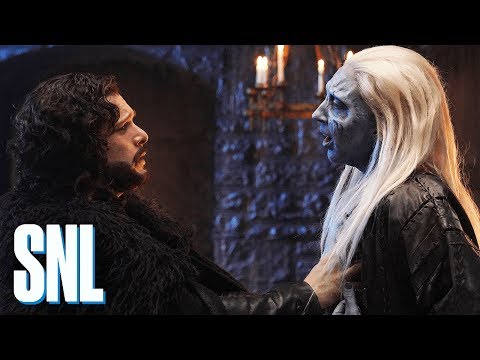 In case you haven't heard, winter has officially come to HBO's hit series Game of Thrones. By the end of May, we'll know who's seized the Iron Throne, but we'll also be left with a Westeros-sized hole in pop culture. With the eighth and final season of Thrones set to premiere on April 14, Jon Snow himself (Kit Harington) stopped by Saturday Night Live to host -- and yes, there were plenty of GoT-related sketches throughout the night, including one that played on the fact that HBO won't just let its cash cow disappear into the ether. No, there will be spinoffs, prequels, and various other IP derivatives to keep the fandom going strong.

And on SNL, the possibilities are unlimited. How about a show called Castle Black, in which Jon Snow struggles with his forbidden love for a White Walker? Or a riff on MTV's Daria, but starring everyone's favorite adolescent assassin, Arya? There's no reason not to combine popular franchises, as in the case of Game of Thrones: Special Victims Unit -- Mariska Hargitay and Ice Cube made a surprise appearance to take a look at some of Ramsay Bolton's more heinous crimes.

In the end, it's not as outlandish as the sketch makes it seem. Like the voiceover points out, there's a significant chance that HBO will go "full Star Wars" with Thrones-adjacent content. God help us all.