Salt Bae on 'SNL' Is Way Weirder in Person

He's the MOST IMPORTANT CHEF in the WORLD. 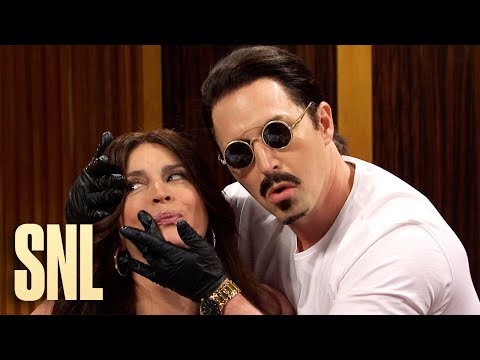 You know those things that look cool on camera or sound nice in concept, like live ASMR events and sensory deprivation tanks, but just end up being kind of uncomfortable and weird in person? Salt Bae, the meme chef of freakin' 2017, seems like he'd be one of those things. The sensual seasoning merchant popped up on this weekend's Saturday Night Live, hosted by Daniel Kaluuya (who's been cleaning up during this awards season for his portrayal of Black Panther leader Chairman Fred Hampton in Judas an the Black Messiah), and proceeded to antagonize a table of couples with his bizarre... meat... rituals.

In the sketch, Kaluuya, Cecily Strong, Mikey Day, and Ego Nwodim sit down at a table at Nusr-Et, the luxury steakhouse chain Salt Bae owns. The ladies are overjoyed when the man himself walks out and proceeds to manhandle steak in front of them, dribbling handfuls of salt crystals into their food. Kaluuya is horrified by the viral celebrity's antics, saying Salt Bae, in his odd facial hair and sunglasses, gives off "magician energy." (He's right, and we all know how magicians suck.) To make matters worse, David and Victoria Beckham are sitting at a table nearby, watching as Cecily and Ego slap a hunk of steak. Look, steak is great, but this just seems unsanitary.

Emma Stefansky is a staff entertainment writer at Thrillist. Follow her on Twitter @stefabsky.
Thrillist TV
History of
The History of Tailgating