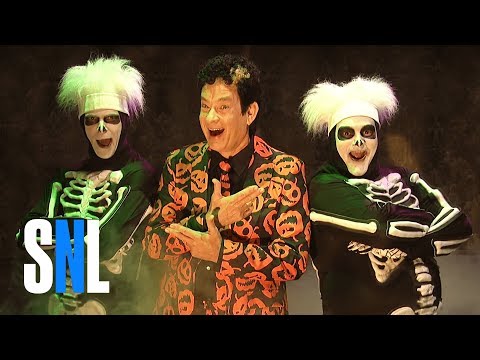 If you didn't already have a Halloween costume, you have one now: David S. Pumpkins. You know, from, uh... well, nothing. David S. Pumpkins is not a legendary ghoul or classic horror-movie character. He's just Tom Hanks dressed in orange-and-black slacks and hanging with two skeleton-looking bros who like to dance to spastic techno. But after you watch the bizarre sketch from this week's top-tier Saturday Night Live episode, you'll be running to find your own bespoke pumpkin suit.

SNL is on a weird streak worthy of the Coneheads, the Falconer, and Will Ferrell's everlasting (but technically unaired) Gus Chiggins. At a moment when political humor is the dominating force, two of the sketch-comedy's writers, Streeter Seidell and Mikey Day, are going all in on gifting incoming hosts with cartoon-character personas. Larry David owned last season with his Bernie Sanders, but he owned even harder as Kevin Roberts, designer of a confusing FBI training simulator. Peter Dinklage was gifted Jonathan Comets and the hit single "Space Pants."

Now we have Hanks as David S. Pumpkins, the most frightening haunted-house attraction since a bowl of pasta masquerading as witch hair. If you're like me, you'll watch this sketch about a dozen times in hopes of understanding how two imaginative comedy writers came up with "David S. Pumpkins." You won't figure it out, but you'll wonder. Get crackin'.

Matt Patches is a Senior Editor at Thrillist. He previously wrote for Grantland, Esquire.com, and Vulture. Find him on Twitter @misterpatches.
Thrillist TV
Wine and Cheeseburger
Our Newsletter