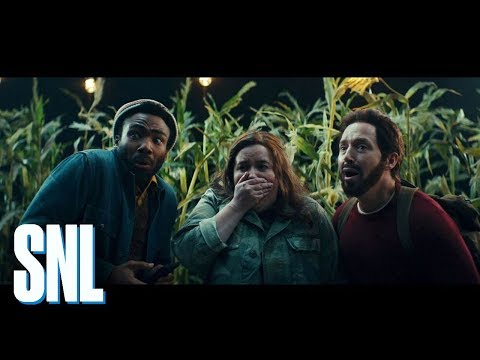 Anyone who's spent any time online over the past few weeks has surely become aware of Kanye West's dramatic return to Twitter. The highlights/lowlights are too numerous to include here, but with Donald Glover hosting Saturday Night Live over the weekend, fans expected the musician and actor to take on... whatever it is Kanye is doing. But how?

In a riff on the recent horror hit A Quiet Place, in which monsters are attracted to sound, Glover and SNL regulars find themselves whispering and tiptoeing through the night, trying to avoid certain death. But it's tough to stay quiet when Kanye is out there on Twitter praising Donald Trump, talking about mind prisons, and even involving Twitter's favorite denizen: Chrissy Teigen. Who wouldn't shout out in horror at some of these statements, even if it means certain death?

There's probably a lesson in A Kanye Place; maybe we should all just take a deep breath before saying anything at all about Kanye West.