'SNL' Made a Hilarious Spoof of the "Official" Royal Wedding Video 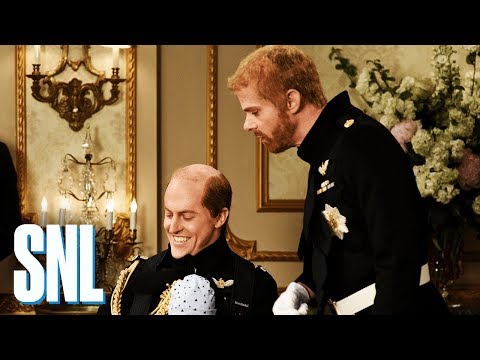 Don't forget to check out our running list of the best SNL sketches of the year so far.

Did you hear? There was a royal wedding of some kind yesterday. It was a pretty big deal, and there was all kinds of high-low drama as the stodgy, formal British royal family welcomed in former Suits star Meghan Markle, whose family is decidedly less than royal. Which isn't a bad thing, considering all the horrible acts throughout history carried out under the banner of the British crown!

Prince Harry (Mikey Day) put together this sick wedding video that riffs on the younger royal's reputation as something of a party animal. Harry rolls around the wedding, greeting everyone from the Queen -- who's forced into a conversation about traveling to Philly -- to his "Aunt Creepy" (Tina Fey). The latter was seated in the "randos" room, with such illustrious guests as Meghan's fellow briefcase girl on Deal or No Deal, Elton John, and the real-life Leslie Jones.

It was certainly an occasion to remember.