TNT's series adaptation of Bong Joon Ho's societal uprising set inside a perpetually moving train traversing a futuristic frozen Earth is not what you might think it is. First of all, Snowpiercer is not a straightforward adaptation: Right after teasing the poor stowaways in the tail revolting against the rich passengers in the front cars that acted as the basis for the movie, the show pivots. Daveed Diggs' protagonist Andre Layton is yanked out of the tail and punted into the role of post-apocalyptic Columbo, tasked with solving a murder mystery by Melanie Cavill (Jennifer Connelly), the voice of the train, and of "Mr. Wilford," the train's inventor. From there, the show deviates from the movie almost completely, checking in here and there for small homages (yes, people's limbs get frozen off in this one, too). But there is one constant between the two: the train, named Snowpiercer, less a train and more an ark on a track, rocketing along a set route from continent to continent, keeping everyone inside safe from the deadly temperatures of the world's surface -- and keeping a firm social hierarchy in place.

Making a show that is essentially a drawing room play set in multiple different rooms feel like it's constantly in motion is no easy feat, and Jon Cowley, the visual effects supervisor who, with his company FuseFX, worked on bringing the show's largest character to life, spoke to Thrillist about the challenges and excitement of building a futuristic train that looked real enough to live inside. "Snowpiercer, for us, was definitely a world building show," he said. "Given that the entire project was shot on a blue screen set inside a studio, that whole world had to be built. We started with photo reference -- what the far north looks like or other kinds of desolate environments. We did concept art, we did previz, we built out that world in advance to figure out what it would look like in this version of the story."

This being a TV show, and therefore able to deviate from both its film and graphic novel source material (Bong's Snowpiercer was based on Jacques Lob and Jean-Marc Rochette's Le Transperceneige), TNT's adaptation has plenty of leeway to "do our own sort of spin on the physics of this universe," Cowley said. "There's definitely different storytelling arcs that are being told." 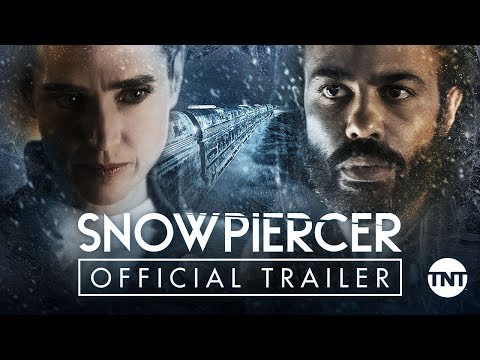 To remind us that all the action is taking place inside a constantly moving vehicle, many episodes of the show contain zooming shots that take you from the inside of the train to the frozen outside, or from the icy outside environment into the belly of the "sub-train," with its system of cable cars running supplies from section to section. "We also get to play cinematographer sometimes," Cowley said. "It's one thing to design these set pieces of that world, and then it's another thing to light that world and compose that world and figure out the camera work. Every single camera movement when we're outside of the train, that's all done digitally. We get to decide what that camera move looks like, whether we have a big crash into something, whether it's a slow pan and scan of that environment."

Production provided FuseFX and another visual effects company called Method Studios with a map of the train's fixed route around the world, hinting at specific locations from Earth's lush past, now completely iced over, one might see if they looked out a window. "We got to explore a couple of those spots along the journey," Cowley said. "I'm not sure if I can give away what those are, but we get to establish frozen barren wastelands and cities, and what different environments look like in this kind of world. It was a lot of fun."

But first, Cowley and his team had to learn a lot about trains. "YouTube is our friend. Videos are our friends. We will watch footage of trains powering through snowbanks, to understand what that looks like. You get into interesting challenges with size and scale. This train is massive. There isn't any train that exists that's three stories tall. So we're trying to make sure that this massive structure, as it's moving through these barren landscapes, looks massive and that you get that sense of speed. How a snowbank shatters apart when a multi thousand ton train smashes through it is part of how we make sure that this world is believable. What does a weather station in Antarctica look like after it's been frozen over? What does the Northern Corridor look like with every tree snapped and frozen? And what would survive after seven years in this kind of environment?"

Of course, there's only so much of the real world you can bring into a fantasy show of this scale, and Cowley is well aware that a giant train chugging along a metal track in the middle of an eternal blizzard isn't exactly scientifically sound. "We sometimes talk about 'movie physics,'" he explained. "If we truly honor straight-up physics, what would happen in a world that cold may not be that visually interesting." For example, in an environment as cold as Snowpiercer's, it would actually be too cold for clouds to form in the sky -- but a cloudless sky is nowhere near as interesting to look at as one with roiling banks of cumulus threatening more deadly weather. "Part of telling a great story is setting up the rules of this universe, but also making sure that universe looks awesome, and that it looks cool and that it's engaging."

The thing about visual effects that sets it apart from other aspects of a show or a movie or even a commercial is that the audience is never supposed to clock that any visual effects are actually happening. "You're not supposed to notice," Cowley said. Sometimes, the VFX stand out like a sore thumb, or don't hold up when revisited a few years later. "For every time that something didn't resonate, there's 20 other examples where you didn't even know that we did the work, that the time, the energy, the budget was there. If we do our job well, no one knows."

Cowley also teased a big ending sequence that wraps up the finale of the show, which was one of his team's biggest undertakings. "We got to handle the dramatic conclusion to Season 1 there. I wish I could get into the spoilers on that one. Being able to show the difference between the tight close space inside the train, and then the massive expanse of the rest of the world was definitely a highlight." Seeing as the film ends with a spectacular, world-shattering crash, the show needed to gear up for something similar in its finale. The good news for the train, though, is they're already working on a second season. "Really what it is, is here's a character traveling through these lonely isolated environments, circumnavigating the globe again and again and again, with the goal of just to survive. So, just like everybody inside the train is trying to survive, the train itself is trying to survive."