Warning: This post contains spoilers for the movie Split, and discusses the ending of the movie in detail. Reader discretion is advised.

When The Sixth Sense arrived in theaters in 1999, director M. Night Shyamalan was not known for his big twist endings. With only a small independent film and a financially unsuccessful Rosie O'Donnell comedy to his name, he wasn't really known for anything at the time. His new movie Split, a psychological thriller starring James McAvoy, opens at a vastly different moment in his career -- and in a more twist-ready, spoiler-conscious movie landscape. But he's up to the same tricks.

And they're still working: with a Rotten Tomatoes rating of 76% and an opening weekend box office total over $40 million, Split is on track to be a bigger critical and commercial hit than his 2015 "comeback" horror movie The Visit. After a few high-profile misfires, including 2013's Will Smith flop After Earth, the controversial director has recaptured some of the magic that made his name synonymous with a specific brand of slow-burn suspense film in the early '00s. Sorry, haters: the Shyamalassaince is real.

How exactly did he do it? By returning to his roots with perhaps the riskiest (and potentially most surprising) twist ending of his career. 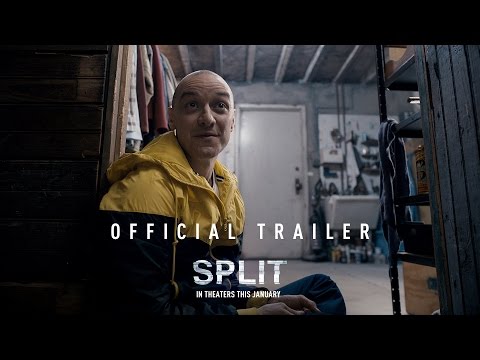 So, what's the big twist?

Like many Shyamalan films, Split is about trauma. The film's teenage protagonist Casey (Anya Taylor-Joy of The Witch) is an awkward misfit and the target of Kevin Wendell Crumb (McAvoy), who suffers from dissociative identity disorder. Kevin kidnaps Casey, locks her and two other girls in a mysterious underground lair, and submits them to his 23 distinct personalities, each of which McAvoy embodies with menacing glee. But Kevin also might have a 24th persona, a terrifying entity known only as "The Beast." Unsurprisingly, as the tension rises, we eventually meet the nightmare.

The Beast is an enormous, roided-up version of McAvoy, capable of crawling up walls, bending steel bars, and feasting on teenage girls with no remorse. As Casey tries to make her daring escape, wielding a shotgun and getting her clothes torn off along the way, she eventually gets cornered by the Beast, who notices some scars from self-inflicted wounds on her exposed skin. According to the Beast's twisted logic, Casey is not "untouched" like the other girls he's killed. She's suffered -- like him -- and is "pure." So he lets her go.

We then see Casey waiting in a cop car as a calming voice says her uncle, who is revealed as an abusive creep in flashbacks throughout the film, is on his way to pick her up. If the movie ended there, this would've been a dark, disturbing final image to a story that mixes real life trauma -- sexual abuse, abandonment, and self-harm -- with familiar horror tropes in an often queasy (and effective) way. That's how the "normal" version of this movie would end. But Shyamalan is up to something far weirder.

After a quick scene where we see McAvoy's villain Kevin talking to himself in a mirror, bragging about his supernatural gifts, we cut to a small diner. As a TV newscaster describes Kevin's crimes, referring to him by a new nickname "The Horde," we overhear whispers about another bizarre bad guy who terrorized Philadelphia 15 years prior. He was a serial killer. He was in a wheelchair. He had a funny name. Suddenly, a man sitting at the diner in a shirt with the name Dunn on it -- and played by a Bruce Willis -- turns to them and says the name of the other villain: they called him Mr. Glass.

Yep, that's the big twist: Split is set in the same cinematic universe as Shyamalan's 2000 super-hero tale Unbreakable. In a move that's perhaps even more ambitious than the title-switch J.J. Abrams played with last year's 10 Cloverfield Lane, the notoriously secret-prone director has slipped a sideways-sequel to one of his most beloved movies into theaters without anyone noticing. It's not just a twist ending; it's a twist beginning too.

It's safe to assume that a good portion of the young people who flocked to movie theaters over the weekend to see this PG-13 thriller aren't familiar with Shyamalan's other films. (According to Box Office Mojo, 52% of the audience was under the age of 25.) Even if you did see Unbreakable when it was first released, it's very possible you forgot the name of Samuel L. Jackson's comic book collecting character Elijah Price, who reveals himself as the train-bombing psychopath "Mr. Glass" in the movie's closing scene. If you didn't remember that detail, the final beat of Split left you scratching your head in confusion -- or rolling your eyes at the screen.

But, for Shyamalan obsessives, the twist is a revelation, a neat bit of fan service, and an answer to years of speculation. Not long after Unbreakable's release, the secretive filmmaker began to discuss the possibility of one day making a sequel. It turns out, according to an interview with TheHollywood Reporter, the Kevin character in Split was originally a part of the Unbreakable script. "I pulled him out, because it just wasn't balancing right," he explains. "But a bunch of the scenes that are in this movie, I wrote 15 years ago."

As shocking as the ending is, it also makes a twisted sort of sense. More than his mega-hits like The Sixth Sense and Signs, Unbreakable is the Shyamalan film with the most devoted cult following. A large part of its appeal is in the way the movie toys with genre conventions by telling a superhero origin story in a restrained, subdued style. Similarly, Split is a Silence of the Lambs-style thriller that, in its final moment, reveals itself to be a portrait of a comic book villain. It redefines what comes before it by playing with a formal feature of modern superhero films: the post-credits "tag" scene you often see in Marvel films.

Does this mean all Shyamalan films are now connected? I doubt it. This isn't quite like the connective tissue found in Kevin Smith's View Askewniverse. Depending on how you look at it, there's something far more ambitious or cynical going on here. While some will dismiss Split's big twist as yet another example of Shyamalan's enormous ego -- this is still the same guy who cast himself as a history-shaping, Harriet Beecher Stowe-like writer in Lady in the Water -- it also feels like a savvy way for him to carve out a lane in the reboot-centric, franchise-driven world of modern movies. If everyone else is cashing in on their old hits, why not him?

Of course, Shyamalan has already told EW that he has plans for a third Unbreakable film. He's likely working on a script that will pit McAvoy's Kevin Wendell Crumb against Bruce Willis's David Dunn, providing fans an Avengers-like mash-up of two of his most vivid creations. One can only imagine what new type of twist ending he has in store.

Dan Jackson is a staff writer at Thrillist Entertainment and he's already living in the Shyamalan-verse. He's on Twitter @danielvjackson.