In the great pantheon of holiday television programs, perhaps none is so loathed, so disowned, and so notoriously ravaged as the Star Wars Holiday Special. CBS produced and aired the special in 1978, much to the chagrin of George Lucas, who was barely involved. Maligned upon release, the Holiday Special remains to this day a source of comedy and discomfort for those involved, including cast members Mark Hamill, Harrison Ford, and the late Carrie Fisher, who once said she liked to show the special at parties, "mainly at the end of the night when I want people to leave."

As diehard Star Wars fans with a masochistic streak, we decided to give the Star Wars Holiday Special another watch. And guess what? It's even worse than we remembered! Plodding, bafflingly unintelligible (who thought Wookiees as main characters was a good idea?), and tonally schizophrenic, it's almost impossible to muster through. But muster through we did, and we came out on the other side none-the-better and all the more confused. With The Last Jedi's release, and the Star Wars universe in a constant state of expansion, here are the nine biggest questions we're left with. Perhaps one of the many sequels in the pipeline will clear them up?

1. What ever happened to Chewbacca's family?

The Star Wars Holiday Special introduces us to Chewbacca's family – father Itchy, wife Malla, and son Lumpy – who live on the Wookiee planet, Kashyyyk. At the beginning of the program, the family eagerly awaits Chewie's return from a mission with Han so it can celebrate Life Day, a kind of Thanksgiving-Christmas hybrid holiday where Wookiees dress up like cult members and worship a tree.

The holiday special aired a year after A New Hope and two years before The Empire Strikes Back. Why, then, in all of his subsequent appearances, does Chewie never mention his family? Though the special isn't technically canon, it did mark the first appearance of Boba Fett, which legitimizes it somewhat. J.J. Abrams considers it part of the Star Wars continuity, and in Chuck Wendig's tie-in novel, Star Wars: Aftermath -- Legacy -- which is part of the official canon -- Chewie is reunited with a son named Lumpawaroo. But what about Malla? Is Itchy dead? Is Han ever like, "Hey maybe Chewie deserves to be home with his family instead of chasing after the Millennium Falcon and herding space monsters?" 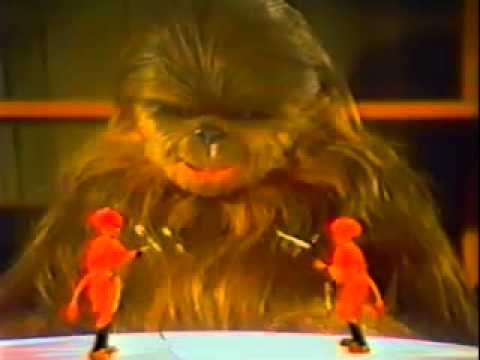 2. What's up with those mini hologram acrobats?

Because Wookiees don't speak English, and because CBS completely skipped on subtitles for unknown reasons, deciphering the first 15 minutes or so of the special is an exercise in pure misery. Chewbacca's family members growl, bark, and howl at each other as they walk around their avant-garde tree house doing fairly mundane domestic stuff. Malla eventually turns on some sort of hologram board for a restless Lumpy, and… we're not even sure what to say.

The Cirque du Soleil-esque performance -- set to music that is best described as "bumbly" -- is really something to behold. What is that green thing? Why do the red guys have tails? The sequence lasts an agonizing 3 minutes, is never referenced in again, and as far as we can tell, was the byproduct of some stale '70s LSD.

3. Why do Wookiee computers communicate in English?

When Malla sends a message to Saun Dann, a local "human trader," the language on the computer starts in some gobbledy alien code before turning into English. Why? Wookiees don't speak English day-to-day (although they do seem to understand it) and the wording on the screen is for Malla, not Saun. According to Wookiepedia, Wookiees speak a language called Shyriiwook (because Star Wars). So why isn't the screen in Shyriiwook, huh? For the record, we did not learn these answers in Revenge of the Sith's extended sequence on the Wookie planet of Kashyyyk either.

4. Is anything taboo in a galaxy far, far away?

This one is pretty troubling if we're being honest. If the hologram acrobats and Mark Hamill's highlights didn't snap you right out of the holiday special, Harvey Korman in blackface drag oughta do it. Korman -- a renowned comedian best-known for his work with Mel Brooks and his appearances on The Carol Burnett Show -- plays three different roles in the holiday special, and all of them are pretty god-awful. But his first turn, as an eccentric female chef named Gormaanda, is so cringe-worthy that it's almost unwatchable. In addition to the obvious blackface and unfunny verbal stereotypes, Gormaanda is also decked out in a chest-padded fat suit, and propagates our favorite dated stereotype: that women work best in the kitchen. It's pretty much every costume taboo in one terrifying, baroque package. Oddly enough, this character hasn't been entirely written out of canon: in the kids book Tales From a Galaxy Far, Far Away: Aliens: Volume I, we learn that Maz Kanata's chef Cookie learned his techniques from studying Gormaanda's videos. 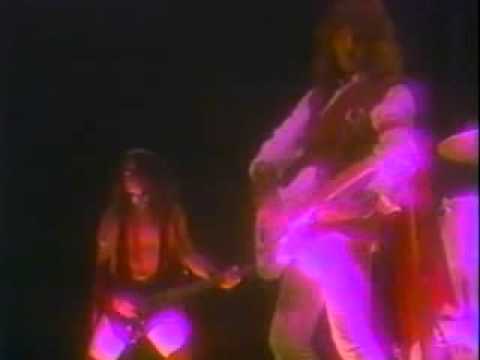 5. What Star Wars planet would Jefferson Starship be from?

Diahann Carroll's whacky Mermeia has a Naboo vibe (those Naboo ladies love their ornate headdresses), but Jefferson Starship's strobe-light soft rock is harder to place. Coruscant is the easy answer, but we like to think they're survivors from Alderaan who make a living planet-hopping and singing moody songs about their dead friends and families. Although, their lightsaber-looking microphones could mean they're Kyber aficionados from Ilum. 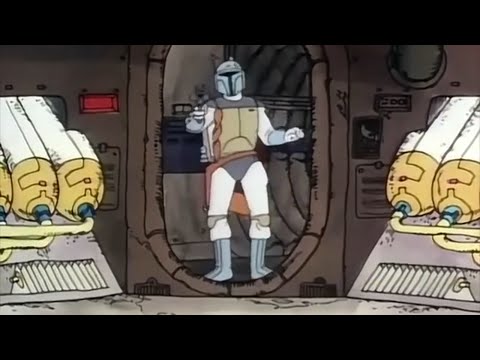 6. How does Lumpy own a cartoon version of his dad's adventures?

Is Chewbacca so famous on Kashyyyk that they've turned his adventures into a series of cartoon shorts? It looks that way, since Lumpy can just, like, sit in his room and watch an entire episode of "Chewie and Han Space-Time Hijinks" on his portable DVD player. And oh hi there, Boba Fett! 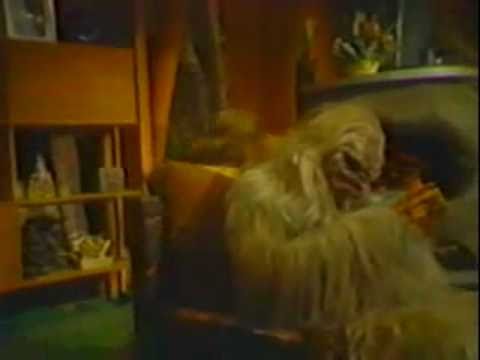 7. Do televisions exist everywhere in the Star Wars universe, or just on Kashyyyk?

Speaking of the Chewie cartoon, why is it that Kashyyyk has such Earth-oriented technology? TV screens pop up frequently in the Star Wars Holiday Special, and there even appears to be some sort of cable or public access situation going on. Does this mean there are TVs on every planet? If we want to get canonical, the Republic, and later the Empire, used a communications system called the HoloNet to transmit broadcasts across the galaxy. But it was mostly used to spread propaganda -- like we see in the Cantina on Tatooine later in the special -- not to air cartoons or problematic cooking shows. Is Kashyyyk TV something else entirely? Something local? We deserve an answer.

8. Whatever became of Ackmena?

Bea Arthur is arguably the best and only thoroughly watchable part of the Star Wars Holiday Special, even though her character Ackmena spends most her screen time tending to a creepy patron at the Mos Eisley Cantina, where she works as a bartender. The creepy alien doesn't just bother her verbally, but at one point grabs her from behind and forces her into a backward hug. It's pretty gross!

Luckily, things take a turn after the Cantina guests watch a message from the Empire on the bar's giant flatscreen TV, enforcing a government-sanctioned curfew. When the patrons ignore Ackmena's last call request, she sings them a song set to the tune of the "Cantina Band" song from A New Hope. It feels like something out of a hammy studio musical, and to that we say, brava! Of course, all good things must come to an end, and Ackmena is thereafter shuffled offscreen. We have no idea what becomes of her after that, as she's been -- like just about everything in the holiday special -- abruptly shunned by the fandom. But it's fun to imagine where she might have fun off to. We can't see her staying on Tatooine forever. Maybe she found refuge in Maz Kanata’s castle on Takodana. We could see this two drink-slingers getting along. Oh, the stories they’d tell...

9. Is Han Solo actually having fun?

Our favorite smuggler is usually a proper grump (we can thank the ever-gruff Harrison Ford for that). But Han doesn’t seem all that put out in the holiday special. In fact, he even seems to be... enjoying himself? Is Han Solo is secretly a holiday man? Did he ever force a wee Kylo Ren into elf-striped footie pajamas? Does he make a mean fruitcake? He was a spice smuggler after all. Or maybe he just loves his friend Chewbacca and the spirit of Life Day compels him. The mystery of the Star Wars Holiday Special is everlasting!