As Gerri on Succession, J. Smith-Cameron is a master of the reaction shot. Her eyes wide and lips pursed, she conveys thinly veiled exasperation better than anyone else on TV. Gerri has good reason to be perpetually perturbed. In her role as general counsel of Waystar Royco she's at the whims of her power-mad boss Logan Roy (Brian Cox) and his brood of strivers. She can't say too much lest she jeopardize her standing, but she also often has to be one of the few adults in the room.

Gerri's strange place in the Roy ecosystem has gotten more airtime in the second season, and takes a bizarre and hilarious turn during the fourth episode, "Safe Room." Roman Roy (Kieran Culkin), with whom Gerri has a strangely maternal relationship, calls her after failing to have phone sex with his very patient platonic girlfriend (Caitlin FitzGerald). Scolding, Gerri tells him, "Go to bed and masturbate all your ideas out and let's see how excited you feel tomorrow." He takes the suggestion literally, and she, shocked and titillated, starts sending insults his way as he, well, pleasures himself. Smith-Cameron's face says it all with a mixture of shock and horrified amusement.

Smith-Cameron, a chronically under-appreciated performer, has actually known Culkin for years, having worked together on multiple projects written and directed by her husband, Manchester by the Sea writer-director Kenneth Lonergan, including his 2011 masterpiece, Margaret. Succession's writers may have picked up on her friendly dynamic with Culkin and filtered it into their storylines, because as cutthroat as the show seems on screen, it's actually an environment where inside jokes and collaboration thrives, she says. Smith-Cameron hopped on the phone to discuss negging Roman and more.

Thrillist: Before we begin, I need to ask you about "boar on the floor." What was filming that like?
J. Smith-Cameron: That was a wild episode. When we were shooting that, those of us who weren't being hazed were, like, horrified but laughing at the actors, David Rasche, Matthew Macfadyen, and Nick Braun. It was so awful. It's like Lord of the Flies humor. You're laughing at the actors being funny and then they would cut and you just feel flooded with shame. It's so awful. I remember when we cut that night, going past [writer] Tony Roche and [saying], "Thanks a lot, we're all going to hell now because of all the things you made us think and feel. We all have blood on our hands just because, if nothing else, we laughed." As actors, we enjoyed it.

Gerri was originally a small part meant for a man. Can you talk about how the character has developed since you took on the role?
Smith-Cameron: Gerri's really knit into the fabric of Waystar and is really indispensable, but she's really different from the other main characters because she will never have that entitlement that the name gets her. She always has to sing for her supper. She's there by merit, by her wits. She straddles the world of the family, but she doesn't have that carte blanche that they all have, that entitlement. Gerri still has to be burning the midnight oil, figuring out an angle and staying in there. She's somehow different than Frank and Karl and Cyd Peach. She's somehow worked into the fabric of their relationships as well. It's very unique. It's really interesting. You feel it even on set, the dynamic between actors. I'm just always, very carefully finding my way through it, and emailing the writers, [creator] Jesse [Armstrong] in particular, all the time. They are absolutely great collaborators. That's one thing about the show that's really delightful and unusual. They really want to know what bumps for you. When something doesn't feel right, they'll either try to explain it or rewrite it slightly. They are really interested in your reactions and what you are going to bring to it. They observe you. They observe the little in-jokes that are happening around the cast. We go on location a lot, and you can tell they try to pick up on the dynamic. We improv a lot. They will keep the cameras rolling after we finish a scene. Or we'll do a take where they are like, Mess it up now, put that in your own words. Even if they don't use that material, it goes into the communal hopper for everyone. Even if you don't see what happened, it somehow informs everything going forward and that's fascinating. It's just really fun.

What was your reaction when you found out about the turn Gerri and Roman's relationship takes?
Smith-Cameron: My jaw dropped. I was like, "What?" But I thought, I don't know, I sort of believed it of Kieran's character. I bought it, but it was still shocking. I feel like that's Gerri's reaction too -- she doesn't quite know what to think. She's half bemused and half kind of like, Oh, this gives me an edge. It's more than that. I think the main thing is she doesn't really know what to make of it. But underneath all that, there's a real bona fide rapport that starts in the Hungary episode. Like a confidant relationship, or a camaraderie, or some kind of connection that they have. I guess in that hostile world of the dog-eat-dog Roys, maybe if that incubates something like that, it might take a lot of strange twists and turns. I've always embraced it because it seemed like such a wonderful storyline. I think it's so unique. I've never seen anything like that. I don't think it knows what it is either. It's unfolding very moment to moment.

You and Kieran were in Margaret, which filmed in 2005, though you didn't share any scenes. What's your relationship like off-screen?
Smith-Cameron: Kieran and I have been friends. We did The Starry Messenger, a play of [my husband] Kenny's, a while back. We didn't really have scenes together, but were certainly backstage together every night. That really is bonding. He was in other plays of Kenny's, so I would hang out with him a lot and we became friends and we have been friends to some degree or another for a long time. The very first scene I shot was between Roman and Kieran, which was in the hospital. I guess we just enjoyed playing off each other. There was a little bit of chemistry, just between actors. They often will let the cameras roll and Kieran is just very playful so sometimes we would be able to do these little improvs that they never used but I guess maybe that might have put the idea somewhere in someone's mind eventually because of their being some kind of rapport or chemistry between those two characters. I think they just got a kick out of that.

In the scene with Kieran where you're taunting him over the phone, was that all written in the script or were you improving insults?
Smith-Cameron: I did improv some. I have to watch the episode again because I was like, Hmm, did I write that, did I say that? It did go on for a while before they said "cut." They always do that. We did several takes of it. I said some different things. You can't hear what Kieran was saying on the phone to me because when he was on camera it was [shot at] a whole different time of day. And then when they moved to Gerri's apartment, he had wrapped but he called in and did the scene with me, but they had no way to hear what he was saying. Only I could hear that.

I think "slime puppy" was my favorite.
Smith-Cameron: Yeah. I think I did call him a slime puppy. I think that was me. I'll have to find out. I'll have to go look at the script on my computer if it's still there. I remember calling him several things. That was wild.

Gerri's resting face is incredible. How did you create this mix of incredulous judgement that she has and how you wanted to cultivate her demeanor?
Smith-Cameron: My audition was two or three scenes and I didn't actually know what we were talking about in the scene, specifically. Both Kendall and Roman say really gross stuff all the time. I thought it would be funny if Gerri was someone who could tolerate it, but was disgusted. I thought they were idiots and revolting. That amused me so therefore I assumed it would be amusing. I had that idea of her being always giving withering looks. If you do something as a character, they start picking up on it and writing you opportunities to give someone that arched eyebrow or look down your glasses at someone. I think that's Gerri's thing: She's just repulsed, but she is pleased she's the kind of person that can take it. So it's the tension between that. 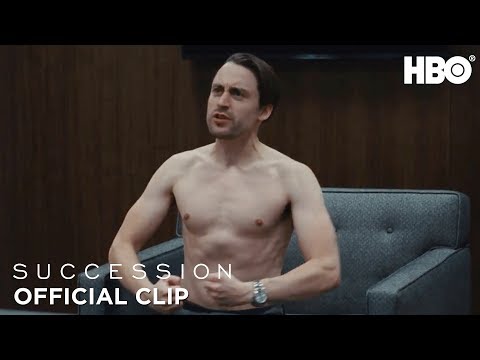 Gerri's costuming has gotten more glamorous this season. How did that evolve?
Smith-Cameron: One interesting thing that happened is, when I started, both Michelle Matland, the costume designer, and I didn't really know who Gerri was yet. I was only supposed to be in a handful of episodes as far as I knew. She had a work uniform: The Brooks Brothers-looking suits and hair-up and very no nonsense. And then as I started working on the part, I was like, "Oh my God. I make a lot of money and I'm very high up in the company." I saw my office on the set and I was like, "Holy shit, I would not be wearing off-the-rack Brooks Brothers." And [Michelle] was like, "No, you wouldn't." We kind of had fun thinking, "What was her look?" as we got to explore the character a little more. Then I also thought that someone who works that hard and has these long hours -- gets up at 4 in order to have a conversation with someone in the London office at the start of day, gets up before the market is open -- that kind of person who wants to look really pulled together does not have time to get her hair pulled up. She would wear her hair down. That coincided with Gerri shaking her hair down metaphorically as well.

You get to see Gerri off the clock in these new scenes with Roman. Was her after-hours look discussed as well?
Smith-Cameron: Michelle is also a brilliant collaborator. She's much more into what the real truth of what the character would do rather than a palette she's putting together or a look she's putting together overall. She's a real actor's designer in that way. We had fun thinking like, "Oh, yeah, she would have silk pajamas. Yeah, she would have a cashmere throw. She would be self-medicating with a drink, decompressing from this horrible, upsetting [day]." That scene when he calls me, I've finally made it home from this endless day and I'm watching the news and I'm having a martini.

Do you think she's protective of Roman even though she exploits him in this weird way?
Smith-Cameron: That's a really good question. I think in spite of herself, she's kind of attached to Roman, and fond of him. She's kind of horrified, but secretly, in some way she can't put her finger on, pleased by it. There's room for it to unfold a little bit.