Why You Should Binge HBO's 'Succession' Right Now

A couple of days before Succession premiered on HBO, New York magazine dropped a feature story on Anna Delvey, the woman who posed as a moneyed heiress and social-climbed her way into the inner circle of the city's art world. People -- including yours truly -- were captivated by this tale of a ballsy interloper who managed to crack the veneer of the highest levels of privilege. Jia Tolentino wrote in the New Yorker that Delvey "threw a spotlight on people who seem to have more money than substance, and on people who aspire to be like those people, as well as the companies that cater to all of them."

That's sort of a fitting description of Succession, too. It helps explain the appeal of a show about a hideously wealthy family that controls a media empire in an era where the, ahem, corruption of the Roys’ real-life counterparts is more bald-faced than ever. But this is a production from Adam McKay -- the man who made both The Big Short and Step Brothers -- meaning that it horrifies and entertains in equal measure. In turn, it’s emerged as one of the best shows of the summer, earning it a second season, and it's a show you should definitely catch up on before the Season 1 finale on Sunday. Here’s why.

The Roy family is so fucked up it's fascinating

The series, created by former Armando Iannucci collaborator Jesse Armstrong, focuses on the brood of one Logan Roy (Brian Cox), head of Waystar Royco, a conglomerate that looks something like News Corp or National Amusements, depending on whether you peg Logan as a Rupert Murdoch or Sumner Redstone type.

He's got four children, each delightfully dysfunctional in his or her own way. There's Kendall (Jeremy Strong), a recovering addict and the most serious of the bunch who at first seems like the apparent heir. He's joined by Roman (Kieran Culkin), the insecure youngest brother who shields himself by being an unrepentant asshole slacker who loves the sound of his own voice. Their sister is Siobhan (Sarah Snook), nicknamed Shiv, a wry political strategist with a boisterous Midwestern weirdo of a fiancée Tom Wambsgans (Matthew Macfadyen) who runs the amusement parks department of Waystar Royco. Then there's Connor (Alan Ruck), Logan's child from a couple of marriages ago, a weird hybrid of a crunchy granola environmentalist and a strident capitalist in denial about the fact that his girlfriend is an escort-slash-playwright who doesn’t really care all that much about him.

Cousin Greg (Nicholas Braun) is in some ways the real Anna Delvey of this situation, though he is actually related to the Roys -- his grandfather is Logan's brother. After an incident involving too much weed and vomiting through the eye hole of a Mickey Mouse-esque mascot suit in the pilot, Greg infiltrates the family inner circle with hopes of getting an office job. He is at first passively accepted (Logan accidentally calls him Craig when they re-meet), but ends up being Tom's confidant in possession of far too much information. Still, he’s a man of less refined tastes than the rest. See, for instance, his highly relatable love of California Pizza Kitchen and his revulsion at the French tradition of eating a tiny bird whole.

The plot surprises you at every turn

Logan suffers a stroke in the pilot, which sends the command of power into disarray. But lest you think the path to power for Kendall -- or anyone else for that matter -- is easy, think again. Succession revels in the messiness of the Roys’ business dealings, and makes it clear that Logan is going to cling to his throne with all his might even when his faculties are failing. Over the course of its 10 episodes, and with significant amounts of time in between each of them, the endgame keeps subtly shifting, allegiances forming and breaking. And it doesn’t only have to do with the internal politics of Waystar. Shiv starts working for a Bernie Sanders-type political candidate, Gil (Eric Bogosian), who challenges the Roys’ ATN, a Fox News equivalent, putting her at odds with her dad.

The cast is uniformly amazing

The Roy’s utter despicability might be too much to handle if the cast weren’t so damn good. Top to bottom, the performances are nuanced. Even smaller ones, like J. Smith-Cameron as Waystar’s lawyer Gerri, are impressionable. Somehow Smith-Cameron manages to convey exasperation and cunningness all at the same time, working only to save her skin. The joy of watching Succession is that these actors, while never making their characters sympathetic, keep evolving the more you watch.

If you know Macfadyen as Mr. Darcy in the 2005 Pride and Prejudice adaptation, you may want to reevaluate him. Tom is part dork, part Macbeth, part devoted spouse and partner. Culkin, meanwhile, keeps making Roman more and more pitiful behind all his braggadocio, and Strong captures how Kendall is perpetually on the verge of coming unglued, undone by his own demons and his father’s cruelty. No one is a "good guy" per se in Succession, but Kendall at least starts out as the most levelheaded Roy, and it's unsettling to watch his calm dissipate. 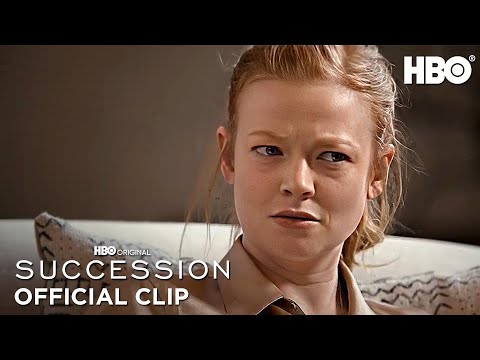 It's unhinged in the best way

Succession never takes itself or the Roys too seriously, but still makes you care about their machinations. And somehow the most ludicrous plot points still feel organic. Connor throws a fit over butter being too cold at a fancy gala. An ostensibly therapeutic retreat ends with their therapist (Griffin Dunne) injuring himself in a pool. Roman reroutes a bachelor party from Prague to a local underground sex party where Tom participates in a mystifying act I won’t repeat here.

The Roy children’s antagonizing dynamic is reminiscent of the sniping among the Bluth kids on Arrested Development, but there’s a looser, more realistic vibe, perhaps because of McKay’s improv-infused production. When the siblings are together they revert back into immature antics -- sometimes resulting in light physical violence -- and vicious insults, but there’s a bizarre undercurrent of camaraderie that runs through their interactions.

Last but not least, one of the main gifts of Succession is the music, composed by Nicholas Britell, who scored the Oscar-winning Moonlight. It's one of the most memorable themes (in all of movies or TV) in recent years. There’s, yes, the piano tinkering opening credits bit, which makes it worth not skipping that first sequence. But the clashing piano and strings carry through the whole series. The combination is both stately and modern, hummable and anxiety-provoking. In other words, it’s perfect.