Should You See 'Suicide Squad,' the Buzziest Movie of the Summer?

Hollywood insiders predict this weekend's Suicide Squad, the first all-villain comic-book movie, could make over $130 million in its first three days of release. The gobsmacking bounty suggests that superhero cinema still satiates audiences of every age, but is it for you? Is the Batman-adjacent blockbuster a POW-BANG-SMASH hit or is it the movie equivalent of Jared Leto hiding a dead pig in your bedroom? Here's what you need to ask yourself:

Was Batman v Superman: Dawn of Justice your everything?

Or did Batman v Superman knock you back into a depressive state of hopelessness and despair?

This March's superhero showdown was danker than Batman after a CrossFit session, but hopefuls -- me. You? Us. -- saw Suicide Squad as cheeky course correction. Between Will Smith's quips, Margot Robbie's gleeful psychopathy, and rock-radio hits, the team-up movie would be Batman v Superman's off-kilter second cousin who always shows up to family functions with a keg and a pile of fireworks. Crazy fun, emphasis on crazy.

The actual movie, from director David Ayer (Fury, End of Watch), certainly aims to be that man-child weirdo. If only Suicide Squad knew when to laugh. There are playful introductions to the anti-hero unit, complete with bubble-letter rap sheets that pop on screen, and bursts of slaphappy action, repeated ad nauseam until the credits roll. Everything arrives DOA. There's no limit to how many times Suicide Squad can acquaint us with Deadshot's sniper skills or Harley Quinn can declare "We're bad guys!" Cluttered with flashbacks and comic-book references, Suicide Squad is like... a two-hour trailer for Suicide Squad. Reactions may vary. 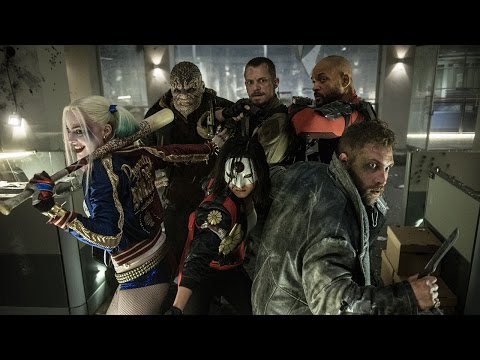 Does a wrathful deity freed from an ancient vase conjuring/rave-dancing a doomsday device into the middle of a major metropolitan area sound like a promising adversary?

It better. The basic set-up: assembled in the wake of Superman's death, the Suicide Squad goes on the offensive when a God-like entity threatens to... well, I'm not 100% sure -- suck the life force out of every person on the planet using superpowered USB cords? Open a rift between the mortal and pop-locking spirit world (yes, this witch can dance!)? The conflict is unclear, but hey, there are eyeball monsters and fire beasts and a bunch of other level bosses to clear, ensuring that Suicide Squad will, at the very least, stimulate your brain.

Suicide Squad fills the man-on-a-mission war-movie mold with caricatures -- think The Dirty Dozen-meets-aggro cosplayers. This works for the actors. Not so much Ayer, who shoots the movie's minimal action sequences like they're rigid bouts of laser tag. An extended melee up a skyscraper is all promise, 10,000 rounds, and zero thrills (blame The Raid for setting the bar too high). An encounter in a decimated city street devolves into another bullet-cases-dropping-in-slo-mo shootout -- a waste, when just an hour before, Harley Quinn unpacked an oversized hammer. Suicide Squad leaves the possibilities of such psychotic carnage to the imagination.

Was Margot Robbie's Harley Quinn your reason to see this movie?

Suicide Squad's redeeming quality is the cast, and Robbie does justice to one of the most popular comic icons of the last 20 years. The movie could use more of her, frankly. Choppy action never gives Harley her big, wet, kiss-of-death moment, even as Robbie juggles her innocence, sexual mania, and killer instincts. We see Harley "die" for the Joker without real consequence. She pines to escape captivity, yet it takes zero convincing for her to swear allegiance to the team. The mere appearance of Harley may do it for some, but so would the cardboard Harley Quinn cutout from Party City.

Does Jared Leto's new take on The Joker intrigue you?

Leto's gangster clown is front and center in most of the Suicide Squad marketing. Not so much in the actual movie. The Joker only appears in a handful of tangential scenes that tease out Harley's origin and give Leto a chance to showboat. If you cut them from the movie, the only thing we'd lose is his face on the poster. And for all the method havoc, Leto's version fits right alongside Jim Carrey's Riddler and Arnold Schwarzenegger's Mr. Freeze from Batman's '90s goofball era. 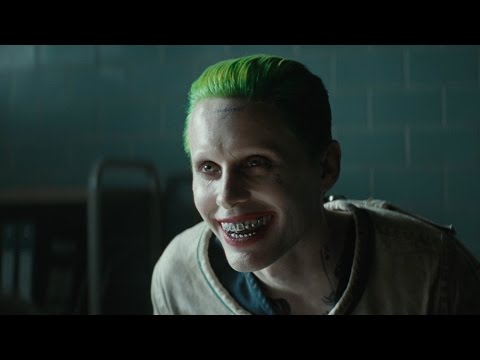 Are you the dedicated Will Smith stan who can find the good in any of the actor's movies (hey, someone had to like After Earth!)?

Suicide Squad revives one-liner Will Smith and we're all better for it. David Ayer's movie has the comedic timing of The Office's Michael Scott, but Smith seizes control with well-timed zings and hero stances. When the movie starts feeling like someone playing Time Crisis in the theater lobby, Smith steps in and, as he once said, "makes this look good." Please rescue this man with a spinoff, stat.

Will you tolerate Suicide Squad if How to Get Away with Murder's Viola Davis is great?

Then maybe buy into this movie -- Davis deserves a spot in Smith's Suicide Squad spinoff. More ruthless than any of the supposed baddies littering the Squad lineup, Davis' boss-woman Amanda Waller makes the countless introductions and re-introductions tolerable. If you're going to abuse the word "meta-humans," filtering it through Davis' gravitas is the way to do it.

Can a soundtrack save a movie?

This is a rough guess, but there are 8,000 music cues in Suicide Squad, ranging from '80s punk to mid-century R&B to Eminem, and employed to trigger memories of better movies. The soundtrack keeps the jagged construction-paper collage of a movie together, but glue constantly oozes up between the edges. Tolerance may vary, though there's one truly egregious cue: Norman Greenbaum's "Spirit in the Sky," employed to great affect in Guardians of the Galaxy, and used again as Suicide Squad's battle anthem. DC, if this was your idea of a Marvel diss track, it didn't work.

Do you want to watch House of Cards' Joel Kinnaman eat a chicken wing while staring wistfully into the rain?

See Suicide Squad immediately. Kinnaman does a number on that chicken wing.

Matt Patches is Thrillist’s Entertainment editor. He previously wrote for Grantland, Esquire.com, Vulture, The Hollywood Reporter, and The Guardian. Call him crazy, but he has serious hopes for Suicide Squad 2 (Twoicide Squad?). Find him on Twitter @misterpatches.