The 15 Most Outrageous Moments of Super Bowl 51

To say that this year's Super Bowl didn't disappoint might be an understatement. Tantalizing trailers and kooky ads aside, what started out as a boring-ass stalemate quickly turned into a false blow-out and then a rousing comeback, as the New England Patriots eked out a historic victory over the Atlanta Falcons, 34-28. The NFL's 51st big game came with no dearth of jaw-dropping catches, a solid halftime show courtesy of Lady Gaga, and a couple crazy fans. Here are the on-field and off-field highlights to relive:

Bill Belichick's stone-cold reaction to the "America the Beautiful" performance

You know, that feeling when you're trying to talk to a reporter about the importance of defense, but you get bopped in the head instead.

While getting ready for her Super Bowl halftime performance, Lady Gaga decided to do a pants-less dance off with her hair dryer. The winner? You decide.

At one point during the second quarter, Tom Brady was caught walking off the field, glowering. Was it because his team was losing? Was he mad at himself for doing a dumb Intel commercial? Or was this the moment he sold his soul to the devil for a comeback?

Lady Gaga and her drones

Lady Gaga used 300 drones to kick off her halftime performance with a flashy bang. Conspiracy theorists everywhere are still wondering if the flying bots, arranged in an American flag formation, were trying to spell out a Donald Trump dis in Braille.

The part when the circle piano upstaged Lady Gaga

Lady Gaga was pretty great. You know what else was pretty great? This 360-degree PianoArc, which wasn't on screen for nearly enough time. (Okay, actually, it was on long enough to make the keyboard maker's website crash.) We need more PianoArcs.

When Lady Gaga got a new super fan

Yeah, real tweet that happened. And if you think that one's good, Roseanne later wrote that "lady gaga ws just wonderful! She ws kinda like th anti madonna. no huge satanic imagery or anything she did beaver shot her parents tho," and then retweetedInStyle's Gaga outfit homage.

Thanks for jinxing the Falcons, Madden.

That time when this Falcons fan had way too much fun

The catch heard 'round the world

"What the...?" said everyone, when Julian Edelman's insane catch kept the Patriots' clutch fourth-quarter drive alive, leading to the first overtime in Super Bowl history.

Twisting the dagger in Atlanta's chest, James White dove in from the 2-yard line during overtime to cap off 31 unanswered points and cement the Patriots' unprecedented comeback. No other team has won a Super Bowl after trailing more than 10 points, and no other quarterback has won five Super Bowls. Brady also set a new record for passing yards and became the first player to ever win four Super Bowl MVP awards.

When everyone booed Roger Goodell

Is that the sound of a Demogorgon roaring? Nah, just a stadium full of people booing the NFL commish. 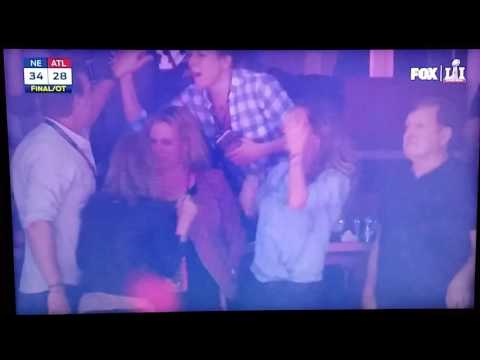