Nine times out of 10, mentioning Super Troopers to people at parties gets you the same response: "Meow!" But to hear it from Kevin Heffernan, who played the brazenly idiotic, mustachioed Rod Farva in the 2001 comedy and returns in this year's long-awaited sequel, Super Troopers 2, the now-classic meow gag wound up an early obstacle in securing financing to shoot the movie. "All these movie executives would be on the page [in the script] and they’d be like, ‘What the fuck is this?’" Heffernan recalls. "It got us booted out of rooms, you know? But we ended up doing it to the point where people love[d] it."

Super Troopers is an endlessly quotable movie made up of endlessly memorable slapstick comedy, rural Vermont humor, police farce, and stoner gags made by the comedy troupe Broken Lizard, the same group of dudes behind Beerfest and Club Dread. Everyone with a taste for Broken Lizard’s banter has a favorite Super Troopers joke: the repeater sequence, Geoffrey Arend’s snozzberries line, the burger joint fracas, Brian Cox pissing on the side of the road during a pullover. But without a doubt the most beloved prank in the movie involves stars Steve Lemme and Paul Soter nabbing a motorist for speeding and messing with him using feline argots.

Replace the word "now" with "meow," and you get the idea: two straight-faced state troopers grilling Jim Gaffigan as an unsuspecting driver about his speed, with Gaffigan growing increasingly confused and amused as the bit goes on. Considering that the joke is a blip on the film's radar -- it’s not attached to the overall plot and only spans a few minutes -- it’s remarkably popular. But maybe it’s unsurprising a stunt that’s so upfront about its absurdity would endure as well as the meow gag has. After all, it’s the fuel the Broken Lizard gang runs on. In Soter’s words, that’s the essence of their humor: "Guys just being idiots, trying to make each other laugh." 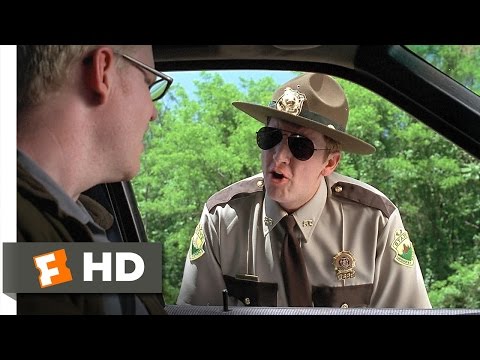 Clearly the meow gag didn’t pose any problems for the guys this time around, evinced by its reproduction in Super Troopers 2: Lemme and Foster up in the same position as last time, pulling over Gaffigan yet again for speeding in Vermont. (It’s actually Canada, sort of: Super Troopers 2 revolves around a border dispute between the Green Mountain State and our neighbors to the north over a chunk of land that, unbeknownst to all, rightfully belongs to the United States.) "We had to figure out in this one how to call it back, and we had this idea that the meow game is a thing people point to," Heffernan says. "Maybe it’s iconic or whatever it is, but in these guys’ lives as characters, that’s just one game that they played many years ago and they have a thousand of them."

Soter, Lemme, Heffernan, and Erik Stolhanske (Robert "Rabbit" Roto) recalled the night the meow gag came to be in Boston on a US tour supporting Super Troopers 2. "It was late at night," says Lemme. "We were in the Travelodge on Pico in Santa Monica. The five of us were all jammed in a hotel room. So we were partying a little bit. We were not writing the script. So we started riffing on this magical clown wizard..."

"A wizard who could turn your tongue into a cat’s tongue," Soter adds, filling out rest of the backstory, "and how funny that would be if suddenly your tongue was small and sandpapery. And that was the riff for a while, and then somebody was like, ‘Oh yeah! Instead of saying now, you’d say meow.’ We were yelling, screaming ‘meow’ at each other in this hotel room, to the point of getting noise complaints." And thus the meow gag, a gag that shouldn’t be funny to anyone but Broken Lizard and yet became one of Super Troopers’ greatest scenes, was born. That’s what you get when you stick five guys (including Jay Chandrasekhar, who wasn’t available for the interview) in a hotel after they’ve been cooped up in a car for hours of travel: unhinged silliness.

Coming up with the idea of swapping an adverb for cat chatter practically requires you to goof off with your pals in the wee hours, most likely while baked. "Usually," says Soter, "that’s the kind of riff where it’s hilarious to us at the moment when we’re stoned, and then the next day you look at it, and you chalk it up to being high."

But it was the experience of being on the road, stuck in long car rides with each other, that formed the joke's bedrock. "We were always in cars together, so it was always like, 'Imagine if this was your job, driving around trying to make your life interesting and trying to make the other guys laugh,’" Soter explains. "And it was like, let’s see if it transplants into that idea of guys just trying to keep their jobs." Considering Super Troopers from that angle feels semi-autobiographical, sans what little police work the troopers actually bother doing in the film. A group of dudes, stuck with one another in their patrol cars (or in Heffernan’s case, an office), resisting boredom on sleepy highways, hunting for ways to keep themselves (and each other) from giving in to the doldrums.

When you have play games to entertain yourself when you should be doing your job, in other words, you tend to forget old favorites as you invent new classics. The quintet mulled over that scenario when updating the meow gag for 2018: "If they pulled over that same guy and he was like, ‘That’s my game!’ and they’re like, ‘I don’t know what the fuck you’re talking about!’" Heffernan says. "We had a riff like that, which I think was the funny twist on the meow game in this one."

Thinking back about how they released something as ridiculous as the meow gag into pop culture consciousness, "We were putting ourselves in Mac and Foster’s shoes and we were like, ‘Would they remember the meow game a month later?’ Certainly this many years later the idea of being like, ‘I saw you on your job 17 years ago, and you said something!’, and you’d be like, ‘Why in the fuck would anyone remember would anybody remember what I said as an offhand stupid thing on my job 17 years ago?’" Soter, along with the rest of the crew, chuckles aloud at the notion these slackers would hang onto a one-off memory of tormenting Gaffigan’s character; like so much else that Broken Lizard whips up, the thought is ludicrous.

"It felt like a meta way to re-approach that gag," Soter says.

Of course, jokes come easily to them. Character is a bit tougher, though being able to slip into familiar roles is a bonus when you’re trying to bang out a script with four other people: that comfort helps grease the wheels on production. "Coming up with ideas we could do that all day, writing jokes, we could do that all day," explains Soter, "but always with us that trick is five guys with five different voices. Because you read it on paper, and if you haven’t really distinguished those different voices, people read the script and it’s just kind of a bunch of talk. In this case, everybody had that voice established, and that’s the hardest part."

"Then you hit the ground running and you don’t have to worry about character so much," Heffernan chimes in. "You just worry about the bits and the jokes and that kind of stuff." There’s a side effect to that kind of freedom from character concerns, though. Liberation gives way to exaggeration, which explains why Farva, the loudmouth boor of the troop, is even more intolerably jocular this time around. "Anytime we had an un-PC line or an obnoxious line," says Lemme, "we’d just give it to Farva, and as a result, all he says is un-PC, obnoxious shit. He’s a little more unhinged in this movie."

After 30 drafts of writing and the long journey of getting Super Troopers 2 made between the announcement of a sequel at the 2006 San Diego Comic-Con and 2015, when they finally got a greenlight on production but were forced to find funding for the film on their own, "unhinged" is a quality to be expected. As Heffernan tells it, "Part of it was how long it took to get the movie made, right? So every time there was a chance that we’d get funding, or whatever it was, there’d be a flurry of activity and you’d do five or six drafts. Some of them were just joke drafts. Some of them had full plots that ended up being too hard to shoot, or too expensive, or there were many characters."

At one point, a United States Homeland Security agent was involved in the plot, which sounds like the height of excess -- and that’s not even taking into account the technical aspects of the movie. "We knew we wanted to do pullovers, but the nature of the pullover in the first movie was like, ‘We’re bored. This is how you’re going to meet these guys, we’re doing a pullover,’ and then we’re just peppering them throughout that movie," says Lemme. Figuring out how to fit that callback into Super Troopers 2 took a full ten drafts on its own. Say what you will about Broken Lizard’s comic style or about their movies; you can’t deny that they’re as devoted to their craft as they are to their fans -- and each other.

Soter, Heffernan, Lemme, Stolhanske, and Chandrasekhar have known each other for nearly three decades: The soul of their work is the camaraderie they’ve built together over the passage of years. Whether they’re struggling to get the money they need to make movies like Super Troopers 2 happen, finding a balance between bringing the script to life and allowing their cast to improvise as they see fit (specifically Will Sasso, guesting here as a bitter Canadian Mountie with a grudge against the troopers), or taking the piss out of each other on and off set, it always comes back to one thing. In Lemme’s words: "Making movies with your friends."