Caution, my children, there are spoilers for Suspiria in this story.

Suffice it to say, there's a lot going on in the two and a half hours of the new Suspiria, Call Me by Your Name director Luca Guadagnino's adaptation of Dario Argento's 1977 Italian horror classic. It's a gory-as-all-hell witch tale, given new resonance as a meditation on Cold War Berlin. It delves into psychology, geopolitics, gender theory, dance aesthetics, and, of course, witches, all hinging on a morally ambiguous ending that might leave its audience confused and slightly queasy -- and not just because of the carnage.

The basic frame of the movie is the same as the original: A young American woman, Susie Bannion (Dakota Johnson), arrives in Germany in 1977 to join a dance company run by the mysterious and rarely seen Helena Markos. Except here, Susie is no wide-eyed innocent. Johnson's dancer is ambitious and unnervingly knowing. She immediately announces that she can perform the protagonist in the ritualistic dance "Volk," choreographed by the enticing Madame Blanc (Tilda Swinton) -- and composed by Thom Yorke of Radiohead. 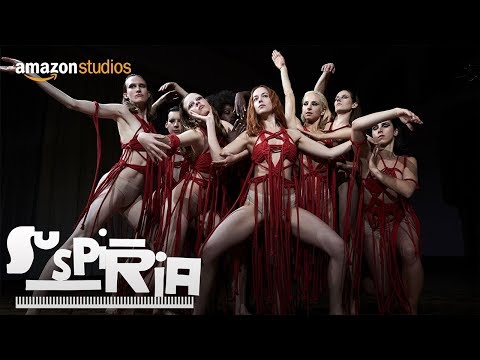 Susie doesn't shrink from Blanc's advancements. She seems tickled by the machinations of her teachers rather than put off by them. And eventually, it all makes sense: Susie understands that she has the upper hand. The coven thinks they are harvesting Susie's body to provide sustenance for the decaying Markos, but in the bloody grand finale, Susie reveals herself to be the leader Mother Suspiriorum. "For us, it became quite unavoidable the fact that it wasn't about a sort of divide between good and evil but more about a power within," Guadagnino told Thrillist in a phone interview. "Susie Bannion had to be one of the elements of that dynamic of power."

This isn't just Susie's story, however -- and it's certainly not one that takes place entirely in a fantasy, like Argento's does. The former was bathed in feverish neon; Guadagnino's is washed out, more true to its setting. As the drama within the Markos Dance Academy is unfolding, hostages are being held on Lufthansa Flight 181, an act deemed political terrorism by some and activism on behalf of the Red Army Faction by others. Berlin, a place torn in two, both by its physical East-West split and by the legacy of WWII and Nazism, has a particularly fraught subtext. Younger generations of Germans were angered by the notion that members of the Third Reich still held places of power, explains David Kajganich, who wrote the adaptation’s screenplay. It's this quagmire of inherited guilt that Kajganich and Guadagnino wanted to explore.

"It was ambiguous at the time whether a political action was politically reactive, whether it was terrorism, what you would call even the simple act of protesting at the time depending on who was making the criticism," Kajganich says. "We thought that [was] a very interesting space to have an audience's relationship with the coven. We didn't want to make moral judgements about the coven as much as we wanted to make procedural observations about how this particular group of women might be able to cultivate private sources of power and figure out how they might wield the most influence in this politically turbulent time."

Enter the character of Josef Klemperer, a psychologist, played ostensibly by an unknown German actor named Lutz Ebersdorf, who is actually Swinton in a lot of makeup. Klemperer is introduced in the very first scene when Academy escapee Patricia Hingle (Chloë Grace Moretz), driven mad by the coven, runs to him seeking counsel. "In this movie, we deal with the irrational," Guadagnino says. "We deal with magic. We deal with the violence that is perpetrated and acted out from a place of fantasy somehow. So I found with David that it was quite essential that we had a character that was completely soaked in the reason."

In tandem with Susie's journey, Klemperer's tragic backstory unfolds. His wife, Anke Meier (original Suspiria star Jessica Harper), was killed in the Holocaust, and he carries around the baggage that he couldn't save her. "Reason was the element that kept him alive," Guadagnino adds. It was what sustained him when he was forced to confront the irrational horrors of the Nazis. When he comes into contact with the Markos coven, he is forced to confront a force that defies all of the qualifications he can make. The witches make him a witness to their ritual, stripping him naked, trembling in front of the bloodbath.

During the movie's denoument, Susie, now having assumed her true form, absolves Klemperer of his memories. "We need guilt, doctor, and shame, but not yours," she says. It's a perplexing line. Is she, the Mother of Sighs, offering mercy? Is erasing his memories its own form of cruelty? Kajganich was eager to let those questions linger -- and let them shape how the audience responds to Susie.

"I think most viewers will watch that scene and think that Susie has taken pity on him," he says. "We know how much he's been through in his own life with the loss of his wife. But now we know what he's been through, in terms of being forced to witness a second abomination, in terms of just a kind of fashion that has damaged him. I think when people think more about that scene they may wonder about the idea that, if your memories are taken away and your role as a witness has been revoked, what options do you possibly have to act morally? If one of Klemperer's previous failures was that he was a witness to the Reich and did nothing in response except grieve for damage that was done to him, how can he hope to evolve if someone has taken away his memories of what he's seen?"

Still, the act yields more questions about Susie than it does about Klemperer. We don't know what her intentions are in leading the coven. The erasure she conducts, as Kajganich suggests, could be a rather fascistic choice. Susie's curious motives are also hinted at in her ascendant moment earlier in the narrative. After announcing that she is Mother Suspiriorum, she conjures Death in the basement of the academy, which goes around seemingly obliterating all the witches who voted for Markos over Madame Blanc. But Kajganich encourages audiences to look more closely. "A couple of Markosites are left alive, including Miss Tanner," he says. "That was in service to an idea that the dynamic of this coven, it's not just that the coven is reset with Susie. Some of the old hierarchy of the coven will remain." That includes Madame Blanc who is nearly decapitated by Markos. She, however, is very much still alive, Kajganich says.

These are seeds that have been planted should Kajganich and Guadagnino decide to do more in the world of Suspiria (maybe a prequel?) -- which is not yet out of the question, nor would it be unprecedented. Argento made a trilogy of movies inspired by the Three Mothers also referenced in the new Suspiria: Mother Suspiriorum, yes, but also Mother Lachrymarum and Mother Tenebrarum. They are the Mother of Sighs, Mother of Tears, and Mother of Darkness, respectively.

The last beats before the credits roll jump ahead to what seems like the present day. Josef and Anke's initials, carved into the wall of their vacation dacha, are still there, but largely ignored by the people milling in the scene. "The imprint of their tragedy was there but that people around them didn't quite see it for what it was and the place seemed to be thriving with a new community," Kajganich says. "There's a sadness to that, the idea that once you lose the context you lose the meaning of things like that. That further illustrates why what Susie does at the end of the film to Klemperer might be something quite sinister."

But that's not actually the final shot of the movie. If you stick around through the credits, you'll find another brief scene. In it, Susie, wearing a winter coat, reaches out to something unseen. She glances to her side, glances back, and walks off. According to Kajganich, Guadagnino added this in the editing process, a "counterbalance" to the scene with Klemperer, once again casting suspicion on her reign. "I found it interesting to leave a door open for the audience to see what Susie does when she's out in the world," Guadagnino says.

It's fairly easy to explain -- at the most basic level -- what happens at the end of Suspiria: A young woman rises to power as a witch. But, on the other hand, there are no easy conclusions to draw from what Guadagnino and Kajganich have wrought. Susie is not a benevolent savior; she was born out of conflict and she may be destined to sow more.