Among those who exist in the middle of the Venn diagram of horror and sci-fi fans, the directing duo Justin Benson and Aaron Moorhead have developed something of a cult following. Their past few features, including Lovecraftian romance Spring and the sibling films Resolution and The Endless, have delved into humanity's relationship with time, space, and our place in the cosmos.

Their latest movie Synchronic, a mind-bending horror-scifi about a synthetic drug that temporarily sends people back in time, stars Anthony Mackie and Jamie Dornan as Steve and Dennis, two EMTs who spend their nights roaming the streets of New Orleans answering emergency calls about violent incidents and drug overdoses and transporting the victims to the hospital. When Dennis' daughter disappears, Steve suspects that the new drug could be the cause of it, and embarks on a time travel odyssey through NOLA's past to save her. Ahead of Synchronic's release, now out in theaters and drive-ins, Benson and Moorhead spoke to Thrillist about the nature of time, the intangibility of death, their love for Back to the Future, and their fear of Neil DeGrasse Tyson's wrath. 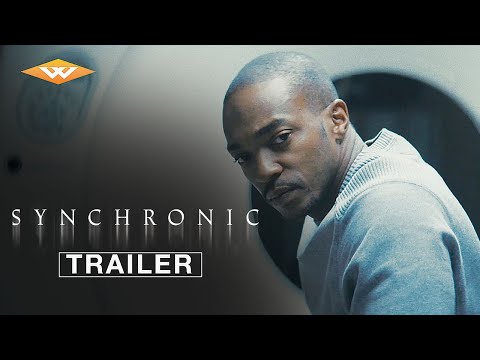 Thrillist: You guys have been very into time travel narratives with your past films, but this one feels a little different. How did the plan for Synchronic originate?
Aaron Moorhead: Justin came to me and was like, "Last night I did bath salts and I saw the past," and stared at me. And I was like, "Let's make a movie" [laughs]. Uh, no. To make a long story really long, we were in between Spring and what we didn't yet know was going to be The Endless, and wanting to make a bigger movie, wanting a studio job that didn't eat our soul, wanting any job, not getting any job.

Justin Benson: We were very unemployed for a very long time.

Benson: Something you don't want to reveal.

Moorhead: Yeah, like a branded content YouTube ad for, like, $4,000 total. You get the idea. And at lunch, I believe, Justin's like, "I had this idea based around this idea that Alan Moore uses a lot in a lot of his stuff," in Watchmen, in Jerusalem and a few other things, called eternalism or "block state universe," where time is all happening simultaneously. There's no distinction between the past, present, and future. And he thought, What if somebody could take a drug and see it that way?

Basically, there's something that I didn't know about at all called designer synthetic analogue drugs, which are over-the-counter drugs. You can buy them at a head shop. I do not recommend this. I've never done it, but also there's a good reason I do not recommend this. That's the whole point of Synchronic. They are chemical analogues to drugs. But they're legal because chemists have slightly modified the molecule so that specific molecule isn't illegal. So, they have similar effects to those drugs, but they also have potentially wild side effects or no effects at all.

Besides the fact that it's just weird that that even exists—you can just walk into a head shop and buy ecstasy, apparently, but weird chemically modified ecstasy, which is terrifying on its own—what if you could just take that and it lets you see time the way that Doctor Manhattan sees it? That's not exactly how Synchronic works, but that was the genesis of it. And then it became this idea of like, what if the things around you started to become other things? And how bad would that scare you? Because that's the horror of the movie to us, some of it.

I feel like I understand everything about time now.
Benson: I make this joke all the time, but this is a good time to use it: I pray to God Neil DeGrasse Tyson never watches one of our movies.

Moorhead: Or reads one of our interviews.

You're gonna log on to Twitter one day and see an angry Neil DeGrasse Tyson thread about Synchronic.
Benson: [Laughs] And he will be correct.

I did love, in this movie, the scene where the record is used to explain how this is all possible. You're the needle, all the songs are right there simultaneously and you're the one traveling around.
Benson: That is a good one. But, actually, I have a great recommendation for you. Read Brian Greene's The Fabric of the Cosmos. Or just watch, I believe it's a Nova documentary he made where he basically does the CliffsNotes version of his book with visuals. He describes the science behind eternalism, or block state universe, way more beautifully, way more quickly, way more completely than we do in Synchronic. But, one of the beautiful analogies he uses is that time isn't a flowing river, it's a frozen river. We just perceive it as flowing.

Moorhead: You could also imagine if one could walk along the frozen river, then he could also turn around and walk the other way. But there is no flow to it. We found that analogy after we'd already put in the record analogy, which we're very proud of. But actually, interestingly, the record was a later addition. That was a last-second addition where we were like, let's just make sure we nail it. And that worked really well.

Benson: Also, from an emotional standpoint, I think the person who put it best is Alan Moore. He said, with this theory, yes, it can be very scary to think that you're not experiencing time as it actually is, that's unsettling. But isn't it nice, isn't it beautiful that anyone you've ever known who's passed away, anyone you've ever loved, any structure you have ever left, anything, it's not gone? It's not behind you. It's just elsewhere. That's all. Hidden from your perception, but it's not gone.

You have that really lovely Einstein quote in the movie as well, from the letter he wrote to Michele Angelo Besso's family and said, "Now he has departed from this strange world a little ahead of me. That means nothing. People like us, who believe in physics, know that the distinction between past, present and future is only a stubbornly persistent illusion."
Moorhead: "Where" is not the word for it, but somewhere we were just starting this interview. Like, somewhere is five seconds ago, when I started this sentence, it actually still exists. It's just inaccessible to us. That's wild.

Benson: And actually, I just realized something that's a fun—well, I don't know if it's fun, but it's interesting. We wrote this movie in 2015. And we couldn't get anything made. And we still couldn't get this movie made. So we went and made The Endless. And when we were making The Endless, unfortunately, my mom committed suicide. And coming out of that—Synchronic was already written, this idea. But when we went back to the script, I saw the script differently. I saw the emotion of the script. I found comfort in my own writing two years prior.

Moorhead: And going off of that, we were at the London Film Festival with The Endless blowing some time at a bar, and talking about feeling lazy, talking about feeling unproductive, and what's gonna be our next movie. It crystallized a lot of what was happening in Synchronic, where we realized that the time that we're spending together, right there, was just as valid as time spent building something. Because you can't take it away. Time spent well with other people is potentially more valid than time spent creating something, or just as valid at the very least. That mattered a lot to us, and that factors a lot into what Synchronic is about.

What I particularly appreciated about Synchronic is that, being, in a way, a horror film, it doesn't romanticize time travel or going back to the past—especially for a Black person.
Benson: We were at Toronto After Dark Film Festival with our first movie Resolution, and we were sitting in this bagel shop, and Back to the Future came on this shitty TV in the bagel shop. And Back to the Future is one of those movies, it's sort of like Pulp Fiction, where every scene is the best scene and you can't turn away.

Moorhead: It's the best movie.

Benson: Yeah. But, you also can't help but notice, like, man, it's really uncomfortable the way a lot of these filmmakers romanticize the 1950s. And in a way, you get it, it's like, hey, that guy was a child during this time, plus they see it through these rosy glasses. But the reality is that the 1950s were only good for a very small subset of the population. With that, came the idea of like, hey, let's make a time travel movie but the past is the monster, because that would be more honest.

Related to that: Why did you pick New Orleans for the setting?
Moorhead: There were two reasons: One is thematic and one is ridiculous. The first one is we already had this idea of being able to go back to different layers of time—that's another word I guess we could use. They're all sitting on top of each other and moving like this, and you can just kind of go down on different layers. So we thought, what place in the United States—it probably would have to be the United States, because that's mostly where these designer synthetic analogues are distributed—what has the most difference, visually and also socially different layers to it. And we landed on New Orleans. It has both Spanish and French colonialism, as well as Katrina, it has jazz culture, it has racial tension, it has an enormous religious background, in ways that other cities don't. I mean, geez, go back a hundred years in Los Angeles, it's just a bunch of farms. It's more than that, but you get the idea. And, you know, you go back a hundred years in New York, and it looks like New York. So, we landed on New Orleans for that reason. We can explore different facets of how the past can be an antagonist, because the layers are so completely different. It's like an oil painting that's been painted over.

And then the other reason is, we genuinely thought, where do we want to shoot? Where's fun? Where's good living? Where do we think, if this is going to require enticing our collaborators to come work with us, where would they want to live? East County, San Diego, where we shot Resolution and The Endless, you know, it's fine. But, it's a lot easier to tell someone who's shooting in Italy. So, the thematic pieces of it dovetail very nicely with the fact that New Orleans is a filmmaking hub, and it's a wonderful city to live in.

Benson: It's tough, because we were a very low budget production, and it's tough to be a very low budget production in New Orleans. We feel like we got a lot of it, but there was so much more that we wanted to get out of that city. That city has so much to offer. I mean, we didn't even get into the jazz stuff, we barely got the French Quarter, because it's too expensive to actually shoot in the French Quarter. Again, love the movie, just saying, man, there's so much New Orleans that we experienced ourselves that we just couldn't get a camera on or find a place for in the edit. It drives us crazy. So, we feel like we need to do another New Orleans movie, even more New Orleans.