What's Up With All the Incest on Tom Hardy's 'Taboo'?

Note: This article contains spoilers from the first three episodes of the FX drama Taboo, an amazing show that everyone should be watching.

It's right there in the name of the show: Taboo. So, when last night's episode of this muck-covered historical drama opened with crabs waltzing out of a dead man's belly, grimy street kids performing amateur dental surgery, and marble-mouthed star Tom Hardy getting a knife wound sewn up by an American spy with blindingly yellow teeth, there was very little to be shocked about. This is the (filthy) world of the show.

But, man: All the incest talk? That might've raised a few eyebrows. Even in the first episode of this unapologetically bleak FX series, it was clear that star, co-creator, and half-naked guiding spirit Tom Hardy's character James Delaney had romantic feelings for his striking half-sister Zilpha Geary (Game of Thrones actress Oona Chaplin). However, the third episode of this eight-part miniseries put the couple's tainted love front and center, elevating the hushed whispers and stolen glances to furious letter-writing and church pew-groping. As they said on Arrested Development, "Bumpy road ahead!"

But this episode wasn't all familial lusting. There was Shakespearean acting, further Nootka Sound developments, and, of course, multiple scenes of Tom Hardy waddling around in his house like Donald Duck in a frock with no pants on. What more could you want from this ridiculous, incestous show? 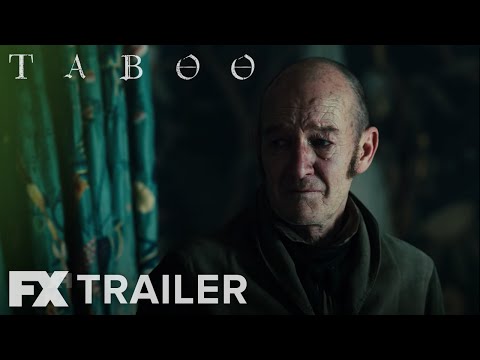 Really, what's up with all the incest?

Ever since the first episode of Game of Thrones ended with Jaime and Cersei Lannister having sex in a tower and then throwing a wee little boy from a window for snooping on them, incest on cable dramas has become increasingly normalized. So, can Taboo still make it shocking? Chaplin, who plays Hardy's half-sister, had a role on the HBO fantasy show as Talisa Stark, and she still seems to think incest is a worthwhile topic. "I think that’ll still be the only interesting aspect of sex that remains," she told Vanity Fair recently. OK: That's settled!

Still, Taboo must work overtime to give the act the tawdry glow it clearly desires. What does that mean? In the third episode, we get the series' most effective use of voice-over yet as Delaney and his half-sister write each other earnest letters that hint at the misdeeds of their past, which include romance novel-worthy lines like, "I woke from a trance and realized the depth of our sin," and "We used to talk to each other without words in dark corners." Delaney clearly wants his half-sister back and he makes an elaborate pitch to her, suggesting that once he gets his shipping company running (and settles his bureaucratic battle with the East India Company) he'll be able to whisk her away to a land "where there is no damnation." She's not as into it -- perhaps because she hates North American winters or maybe because she's just not that into him.

The letter-writing scene is old-fashioned compared to the throwdown between Delaney and his half-sister's husband Thorne Geary (played by Jefferson Hall, also a former Game of Thrones cast member -- he had a small role as the ill-fated Hugh of the Vale). It's an answer to an interesting dramatic question: How do you make your hero's obsession with his half-sister more relatable to the audience? Make his romantic rival a complete monster. "Since you've come back our fucking has become almost murderous," Geary informs Delaney, giving way too much information about his sex life. "It exhausts us -- to think I have this wicked thing beneath me and it's my lifelong duty to punish her. It exhausts us both."

This scene may have exhausted you -- it's one of the episode's many showy monologues -- but it sets up an inevitable violent showdown between Delaney and his terror of a brother-in-law, a man who snivels, screams at his servant about oranges, and torments his wife with obvious glee. In their big confrontation scene, which takes place in Delaney's office, it's fun to watch Hardy listen to this madman with a twinkle in his eye. It's one of the few moments of restraint we've seen from him. It's like he knows Geary will be his lunch soon enough.

How did Delaney get this way?

Despite Taboo's singular focus on Hardy's scenery-devouring character, there are still many aspects of his wounded psyche that remain under-explored. What exactly happened to him in Africa? How did he get those sick tattoos? Why is he so obsessed with his mother? Last night's episode attempted to deal with Delaney's mommy issues in the way this show addresses most subjects: cryptic flashbacks, curious wood-carving, and copious Tom Hardy nudity.

Hats (and pants) off to Hardy for playing a character who hates clothing so much. But besides giving us some glances at Hardy's thighs, the scenes of Delaney wandering around his dusty mansion, tearing down boards, and blowing magical dusts didn't really deliver the type of juicy revelations you'd hope a show like this would be getting to as it approaches the halfway point. It's clear that Delaney has unresolved issues with his mother, who was a native of Nootka Sound, but the specifics of their relationship remain as muddy as the boots on everyone's feet.

Similarly, Delaney's prickly relationship with his newly arrived actress stepmother Lorna Bow (Jessie Buckley) is difficult to decipher. He's clearly developed a fondness for her. (The episode ends with him shooting the Duke of Richmond to defend her.) But he doesn't quite trust her yet. Now that the British know she won't receive Nootka Sound in the event of Delaney's death, she's not as valuable a piece of the puzzle as she once was. It's hard to tell if she'll be an important part of the show's violent end game or simply a red herring.

Wait, let's get back to the incest...

Yes, back to the incest. After the letter writing and the very rude visit with his brother-in-law, Delaney agrees to meet his half-sister at a neutral location: a church. (Where else do incestuous half-siblings meet?) "Shall we pray?" he asks her when she arrives, because even in times of great emotional upheaval, Hardy's character can still be a cheeky dick when he wants to be. After a quick exchange of words, Zilpha straddles Delaney and kisses him, and then says, "Now I never want to see you again."

I believe this is what relationship experts would call mixed signals. Even though this feels like the first episode to address one of the main "taboos" at the heart of the show, the plot does so in a way that feels tentative. It's like Hardy, along with his co-creator father and writer Steven Knight, would rather examine the bloody innards of a dead man than the emotional reality of these two lovers. It feels nervous about its own subject matter. For all its macho swagger, it's got cold feet.

Despite the kiss and this episode's trip to a gay brothel, where Delaney blackmails a former school friend (and bedmate) into spying on the EIC,  the show remains chaste, even somewhat Puritanical in the way it portrays the sexual desires of its characters. The blustery men on this show may yell "fuck" at each other all the time, but there's very little actual fucking to be found on Taboo. It's less interested in crossing lines -- or taking a truly transgressive stance -- as it is in tip-toeing up to social boundaries and then walking away. Like pantsless Tom Hardy, it's only willing to show so much.

Dan Jackson is a staff writer at Thrillist Entertainment and he wants to see more of the dude with the compass on his head. He's on Twitter @danielvjackson.
Our Newsletter