Note: This article contains spoilers from the first four episodes of the FX drama Taboo, an amazing show that everyone should be watching.

There's a scene in the fourth episode of Taboo, FX's grimy historical drama, where a chemical-crazed doctor eats a piece of cow shit, considers the taste of the animal excrement on his palate, demands a piece of pigeon poop, and then nibbles on that too. Moments later, the same character declares his need for "50 gallons of human piss." In case it wasn't clear: feces and urine are essential parts of the Taboo experience. No bodily fluid is off limits.

Loyal viewers wouldn't have it any other way. From the first episode, Tom Hardy's mumbly protagonist James Delaney has been portrayed as a Clint Eastwood-like antihero who rides into town in his muck-covered coat and makes life hell for the maniacal East India Company, the corrupt Prince Regent, and any dirt-covered miscreant who gets in his way of Nootka Sound. But last night, in by far the most sex- and violence-crazed episode of the series so far, Delaney began to assemble his own #squad of the damned.

What did Delaney need this team for? To carry off a thrilling saltpeter heist, of course. Think of it as Ocean's Eleven, but instead of smarmy movie stars in fancy suits, it's a bunch of British character actors covered in soot. Let's take a closer look at exactly what Delaney's extremely dirty dozen accomplished this week. 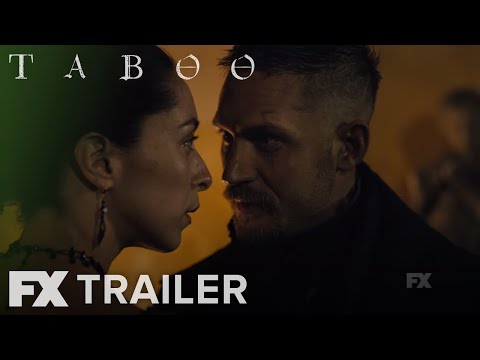 Lorna Bow is officially on Delaney's side now

After last week's exciting murder of the Duke of Richmond, Episode 4 opens with Lorna Bow, the actress widow of Delaney's dearly departed (and insane) father, getting shipped off to an underground dungeon and interrogated by Solomon Coop, the Prince Regent's sniveling assistant. What does he want? Her rights to Nootka Sound, the parcel of land that's caused all this conflict to begin with. That's one of the more refreshing things about Taboo: even when the plotting, dialogue, and character motivations are opaque, it's always safe to assume any given scene is actually an argument about Nootka Sound. As Limp Bizkit would say, they did it all for the Nootka.

Before she leaves, Delaney tells Lorna, "You will hold out," and reassures her that he will recruit the East India Company to rescue her. He stays true to his word, though not without forcing viewers to sit through yet another darkly lit, leering sequence of a female character being stripped naked, humiliated, and threatened with sexual assault. If you regularly endure similar scenes on Game of Thrones, this one will be regrettably familiar. And just as tedious.

After her release, Lorna for some reason agrees to team up with Delaney, who basically admits that he just put her in this dangerous situation to play his two rivals -- the East India Company and the British government -- against each other. Despite that, she's taken a liking to our top-hat-loving hero, exchanging knowing glances with him and trading banter with his weary butler, Brace. The three of them have a pretty odd dynamic, but, unlike most people on this show, they at least seem to enjoy each other's company. I'd watch a sitcom where they hang around their dusty house and get into hijinks.

Later in the episode, Lorna agrees to be Delaney's guest at a debauchery-fueled party and insinuates to his half-sister Zilpha Geary (Oona Chaplin) that she has romantic feelings for the scoundrel. Apparently, when a stepmother wants to have sex with her stepson, it's customary to inform his half-sister. This must be in some 19th century etiquette book that the episode's writers, Steven Knight and  Emily Ballou, consulted. Where else would they learn so much about laughing gas parties? Was it how they discovered every Victorian shindig had a couple guys wearing funny pig costumes?

Delaney is all about that powder

The big laughing gas party towards the end of the episode, which also features dancing, a magic act, and multiple shots of Delaney getting inexplicably spooked by pancake makeup covered extras, is really just a distraction from the larger game afoot. After learning that he'll need to create his own gunpowder to trade with Nootka's native tribes, Delaney recruits his makeshift mini-army of sex workers and tattoo enthusiasts to steal saltpeter from a warehouse belonging to the East India Company. With some assistance from the aforementioned shit-eating doctor, he plans to mix that stolen saltpeter with animal dung and human urine at his secret barn. Voilà! Gunpowder.

If only it were so simple: while at his barn, Delaney is attacked by an assassin who looks like boxer turned pro-wrestler Butterbean. The fight between them is brutal, a bloody brawl that opens with Delaney getting knocked in the head with a blunt object and passing out. He doesn't stay unconscious for long. Soon enough, he's stabbing the doughy tough guy in the legs, dragging him with meathooks, and disemboweling him like he's making a Tauntaun sleeping bag. (Important side note: how ridiculous is the sound Delaney's knife makes whenever he cuts into someone? That sching-sching sound effect is like something out of a Ninja Turtles cartoon. I love it.)

Anyway, after Hardy gets to do his badass knife master thing, we find out that Butterbean was sent by the yellow-toothed American spy played by House of Cards actor Michael Kelly, who is also in cahoots with the magic-trick enthusiast who hosts the big party. She's also an American spy. What do these Americans want from Delaney, and why did they send Butterbean to murder him? Honestly, it's a little unclear and probably doesn't matter. My guess? It's about Nootka Sound. Never forget the most important rule of Taboo: everything is about Nootka Sound.

One thing that's not about Nootka Sound: Delaney's psychic sex powers! Like its artier prestige doppelgänger The Young Pope, Taboo is a show that plays fast and loose with larger spiritual forces. One of the most pressing questions of director Paolo Sorrentino's gaudy HBO papal melodrama is whether or not Jude Law's Lenny is actually divine or a holy fraud. Similarly, Taboo has given us many scenes of Tom Hardy blowing magic dust, having creepy visions, and pulling off a seemingly ahistorical haircut without ever confirming Delaney's supernatural status.

The debate is officially over: Delaney has mystical capabilities, and he likes to use them for telepathic sex with his half-sister. After last week played with the forbidden fruit of incest, giving us breathy letter-writing and church-pew kissing, this episode delivers a bizarre interlude where Oona Chaplin writhes around in bed while pantsless Hardy starts a fire, paints his face, and drinks a mysterious liquid. (There's so much going on in this scene: erotic levitation, shirtless Hardy, and some likely problematic stuff with a "native" mask.) Clearly, Delaney will only use his psychic skills for good, like giving his half-sister orgasms, and not to take out his enemies. That would be uncouth.

Because, despite building a coalition of allies this episode, this guy still has many enemies. In addition to the East India Company, the British government, and the American spies, he has to deal with his half-sister's husband, Thorne Geary, who is consistently portrayed as a cruel and one-dimensional fool. As the wild party comes to a close, Thorne, tipsy off that laughing gas, confronts Delaney and accuses him of having sex with his wife. Delaney tries to be a good bro and takes Thorne outside so he doesn't embarrass himself, but Thorne makes a scene anyway, calling Delaney a racial slur and challenging him to a duel. I was hoping for a Zoolander-style walk-off, but a duel is fine.

How does Hardy play all of this? He stares into the distance. He grimaces. He does that twitchy eye thing that's supposed to connote thinking, but mostly looks like he's getting examined by an optometrist. It's almost like Hardy, the star and co-creator of this often absurd show, knows exactly what most of the audience already knows: Delaney always wins. A duel may sound deadly, but he's got bigger pieces of shit to take care of than Thorne. He's got pots of piss to boil. Gunpowder to make. And a whole stretch of land called Nootka Sound to claim as his own.