What the Actual Hell Is Happening on Tom Hardy's 'Taboo'?

Note: This article contains spoilers from the first two episodes of the FX drama Taboo. Proceed with caution, even though Tom Hardy surely wouldn't, because he's a badass.

It's hard to know exactly what Tom Hardy is saying in any given episode of Taboo, FX's grimy new period drama. As James Delaney, a top hat-sporting ruffian maneuvering through London in the early 19th century, Hardy is a grumbling, monosyllabic force of nature, and any attempt to understand his exact motivations or specific lines of dialogue is a fool's errand. Just embrace the Hardy.

But that doesn't mean you have to watch every episode in a constant state of confusion. The show's plot, which was initially conceived by Hardy and his father Edward "Chips" Hardy, is a combination of real historical events, macho myths, and Deadwood-style dirty-deeds-done-dirt-cheap woven together by writer Steven Knight (Peaky Blinders, Locke). If you're struggling to make sense of what the series is up to -- and where it might be going -- we've got you covered. 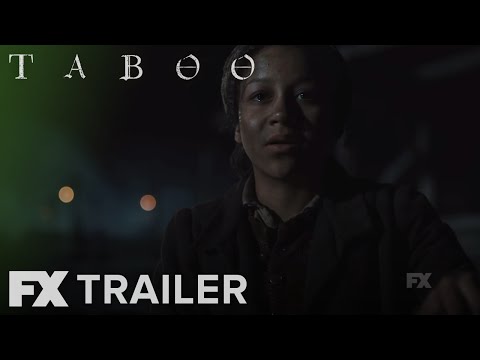 The second episode of Taboo opens with East India Company leader Sir Stuart Strange, played with haughty vigor by Jonathan Pryce, putting a hit out on Hardy's Delaney. It's an exciting way for the action to start, especially since so much of last week was spent watching Hardy dig in the mud and sprinkle magic dust on graves. What's eating at Pryce? Nootka Sound, the strip of land that Hardy received from his now-dead father and which the East India Company really wants to control.

Unlike Tom Hardy's seemingly anachronistic haircut, Nootka Sound is not yet another invention of the writing staff. While it might sound like the name of a '90s post-rock band, Nootka Sound is actually an inlet on the west coast of Vancouver Island and a real source of international military conflicts during the era in which Taboo takes place. ("Sound" or "inlet" means a small arm of a sea, a lake, or a river.) Nootka Island is not an especially large piece of land -- it's 534sqkm in area -- but its potential as a trade outpost with China made it particularly valuable to men like Delaney's dearly departed (and entirely fictional) father.

Before the arrival of the Europeans, the land was controlled by the Nuu-chah-nulth tribe. This is particularly important to Taboo because it's implied that Delaney's mother was a member of this tribe and, as last episode suggested, she was gifted to his father as part of some likely nefarious colonial deal. Part of the second episode deals with Delaney seeking proof that the land was acquired by treaty and not by conquest. He also sets up his own shipping company -- named the Delaney Nootka Trading Company -- and buys a boat from the East India Company that he quickly discovers was once used to transport slaves. The sins of the past are always resurfacing.

This complex history is often glossed over pretty quickly on the show to get to more atmospheric shots of Tom Hardy's tattoos, but Knight seems to have done some serious research. As this helpful primer from Radio Times points out, there was a conflict between the Nuu-chah-nulth tribe, the Spanish, and the British in the 1790s referred to as the Nootka Incident. Taboo takes place in 1814, meaning the writers have taken some liberties with the past, which seems fair enough when you're making a show about a guy who dresses like a goth Mad Hatter.

Wait, wasn't there a war going on then too?

There was! As a piece of historical storytelling, Taboo is as interested in piles of shit on the sidewalk, the sounds coming from the whorehouses, and the way mud sticks to your boots as it is in the process of nation-building. The goal is to put you in the muck of history -- much in the way we experience global events today -- but that doesn't mean there aren't significant military conflicts brewing in the background. And fat suits!

In one of the more ridiculous scenes in last night's episode, we met the prince regent, a gluttonous and foolish political string-puller played by Sherlock's Mark Gatiss. Laying on an expensive piece of furniture while surrounded by creepy dead animals, the prince regent, who would go on to become George IV, is Taboo's first real look behind the walls of royal power and, as with most things on this show, it's not pretty. It's disgusting.

The show takes place in 1814 -- the year that the War of 1812 came to an end -- and it portrays the prince regent, who took power after his father George III was declared insane in 1811, as a man eager for the violent conflict with the Americans to end. He needs more time for napping. In one of the show's more comic moments, he describes a dream where he was lying in the sea surrounded by an army of little shrimp with bows and arrows. In scenes like this, Taboo displays a Game of Thrones-like ability to both dramatize and mock the petty whims of those wielding great military force. How will the decadent prince regent tie into Delaney's gritty storyline? It's hard to say at this point, but they definitely won't meet at the gym.

What was the deal with that spy character?

The royal family and the East India Company are not the only shadowy institutions creating headaches for Delaney in this episode. Like last week, Delaney spends much of his screen-time intimidating people, growling, and making vague threats. (He's like the Young Pope, without that little button beneath his desk.) In addition to run-ins with a mysterious teenager, a dude with a compass tattooed on his head, and weary sex-worker Helga, Hardy also makes contact with an American spy played by Michael Kelly from House of Cards.

That's right: This is a spy show too! After establishing his espionage bona fides by telling Kelly that he has a splinter in his left shoulder, Delaney demands to have a conference with the president of the United States, which was James Madison at the time. His plan doesn't exactly go smoothly: The spy pulls a gun on Delaney and tells him to get lost. "You're mad to have even come here," says the spy. "We are an angry nation."

"I'm counting on it," says Delaney, and then he twirls his mustache and tips his hat a bunch of times while doing a dastardly little dance and blowing magic dust in the spy's smug, bespectacled American face. OK, actually, none of that happens except for the part where Delaney says, "I'm counting on it," which, like many things in Taboo, is either too cheesy or just cheesy enough depending on how cool you think Tom Hardy is.

Is Tom Hardy a cannibal now?

We've gotta talk about the final scene of this episode. In its first couple hours, Taboo has gone to great lengths to establish Delaney as a quasi-mystical being: He does spells, he collects beads, he puts magic powder on his face, and he pulls off a top hat that no adult man should look good in. But has he really done anything profoundly crazy yet? Not really -- until the closing seconds of this episode.

While being trailed down a dark alley, Delaney is attacked by a figure shrouded in black. He gets stabbed in the gut. But then he turns the tables on his attacker and incapacitates him. But, oh, Tom Hardy is not done: He finishes off this poor assassin by taking a bite out of his neck. Yep, this episode ends with Tom Hardy gnawing on a dude's jugular like someone said his voice in the The Dark Knight Rises was a little overwrought. The lesson here: Don't mess with Bane.

The moment isn't exactly out of nowhere -- an earlier scene with his half-sister suggested that cannibalism was a possible hobby of Delaney's -- but it did provide a final jolt to an episode that could feel willfully obscure at times. (How did that teenage girl on the boat disappear? Why did no one else try to kill Delaney yet? What's the deal with his father's wife? Did he have sex with his sister or not?) There are only eight episodes in Taboo, which means we're already a quarter of the way through the series, and the main character still feels more like an idea than a real person.

"Secrets are weapons to me," said Delaney at one point last night. That's true of TV shows as well: A perfectly deployed plot twist or character revelation can re-contextualize information we've already received and make two hours of stylish but slow scene-setting feel worth it. But the clock is ticking for both Delaney and this occasionally exhilarating show. It's time to use those weapons. Don't just bite the neck. Chow down.

Dan Jackson is a staff writer at Thrillist Entertainment and he thinks Tom Hardy should bite whoever he wants. He's on Twitter @danielvjackson.