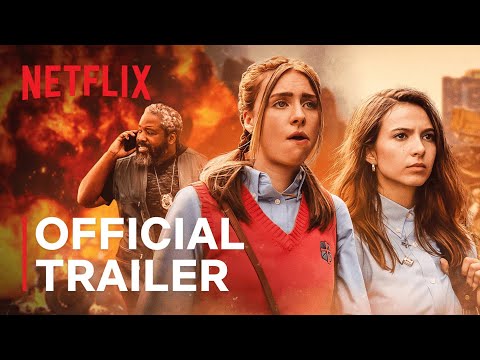 For many students, attending high school is stressful, a constant barrage of academic obligations and social challenges, and adding a high-pressure after-school job to the mix can make it even more difficult. Especially if that job is bounty hunting. That's more or less the Veronica Mars-like hook of Teenage Bounty Hunters, the latest comedy from Orange Is the New Black and GLOW producer Jenji Kohan. More problems, specifically ones involving shotguns and motel sex, means more drama, right?

The Atlanta-set series centers around fraternal twins Sterling (Maddie Phillips) and Blair (Anjelica Bette Fellini), who get into the fugitive-hunting game after a chance encounter with Bowser (Kadeem Hardison), a more experienced and grizzled bounty hunter. As the cheesy-looking text on screen says in the trailer, the two are "catching feelings" and "catching criminals." If you're laughing at that, this might be the show for you.

Obviously, a quippy coming-of-age show about white teenagers moonlighting as gun-totting bounty hunters feels like it could potentially be in poor taste, attempting to wring laughs from one of the cruelest and over-mythologized sections of the criminal justice system. (And more than a few of the jokes in the trailer, like the "you're just weird" punchline at the end, feel a little stale.) But, hey, maybe this will be better than it looks? The series hits Netflix on August 14, so we'll find out then.