Every Bizarre Way Ben Affleck Makes 'The Accountant' Not Boring

I am not an accountant, but I did see the movie The Accountant, which stars Ben Affleck as an autistic accountant who is very good at killing people with guns. But a reckoning of everything Affleck does in this ridiculous movie to make it not boring is in order, so I decided to conduct an audit, despite my lack of CPA certification. Because this otherwise basic movie is definitely not boring.

How does Affleck elevate this Gavin O'Connor-directed thriller? Of his many admirable qualities, like his ability to maintain an argument while leaving a Blockbuster video, the one I've always like the most is that Affleck tries really, really hard. Whether he's directing Oscar-winning movies, rewriting the script for a superhero movie while wearing his Batsuit, or giving paparazzi the finger, Matt Damon's BFF always goes the extra mile. To see what exactly Affleck does to keep The Accountant from being duller than a CPA study session, let's tally up the ways.

Note: While No. 1 through No. 10 below contain minor, out-of-context spoilers for the movie, No. 11 is a major spoiler for the movie, so look away if you'd prefer not to know. 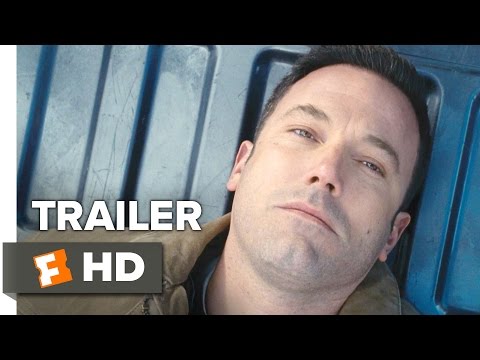 1. He keeps his Batman body

When you saw Batman v. Superman, you probably noticed Batman's swole exterior -- there was a whole sequence where he basically did CrossFit -- but what you didn't know is that this is just the new norm for Affleck's shape. Other actors might have slimmed down to play an accountant working out of a strip mall in Plainview, IL. Not Affleck. All his carefully pressed dress shirts look like they're gonna burst off his hulking shoulders, and his many T-shirts will probably inspire elaborate fantasies about Affleck having a Muscle Milk chug-off with Tom Brady on a plane ride to Vegas.

2. He draws math formulas on everything

I love any scene in a movie or TV show where people open boxes, look over spreadsheets, and draw formulas on the walls. Unfortunately, The Accountant is short on actual accounting -- Affleck's character, Christian Wolff, is too busy running from a shady robotics company -- but there is one dynamite scene where Affleck gets to flex his dry-erase marker skills, and it's masterful. Suck it, Will Hunting.

3. He beats his leg with a wooden stick while listening to scary techno

The Accountant is eight movies crammed into one. None of them is very good, but one of them is a very earnest film about autism, like Rain Man with assault rifles. But one of the ways Affleck combats his disorder is by listening to very scary techno and hitting his leg with a big wooden stick while lights flash in his bedroom. Whatever works, man. At least he's not gambling!

4. He befriends his clients

Despite being chilly with his friendly co-workers and living a nomadic existence, Affleck's accounting character does befriend a pair of kindhearted farmers he provides financial assistance to early in the movie. Why does he do this? Because they have a farm where he can shoot things. Great way to keep a low profile and relieve stress.

5. He shoots melons with faces on them for target practice

What did melons ever do to Ben Affleck? I don't know, but he shoots them with so much anger! It's like those melons told him Chasing Amy is overrated.

6. He takes orders from a Siri-like voice on his phone

The hook of The Accountant is that Affleck's character is the go-to guy for all the world's bad guys, so you'd think this would be a glossy, globetrotting thriller with lots of exotic locales and scenes of Affleck meeting with his shady bosses. You would be very wrong. Instead, the movie takes place mostly in Illinois, and most of Affleck's instructions come from a Charlie's Angels-style voice on his phone.

7. He collects priceless painting in his Airstream

It's not enough that Affleck's international accountant-assassin is a master fighter and a math genius -- he's also a fine art collector. He's got Pollocks and a Renoir in his Airstream, which he keeps in case he ever needs to ride out of town in a hurry, like if someone recognizes him as the guy from Paycheck.

8. He has a Hummel figurine

I've seen too many paparazzi photos of Ben Affleck enjoying Dunkin' Donuts to believe that Ben Affleck would turn down a donut. But here he is in this movie, turning down donuts from Anna Kendrick, who plays his love interest and another donut-loving accountant working for the shady robotics company Affleck has to audit. Maybe he keeps a secret stash of donuts in his Airstream that we don't see.

10. He murders a dude with his belt

The Accountant feels like an attempt to make a Bourne-like thriller, but it doesn't really have enough action movie set-pieces to earn the comparison. At least The Sum of All Fears had... actually, I have no memories of The Sum of All Fears. Anyway, The Accountant does have one great scene where Affleck kills a guy with his belt. It's very cool. More belt-killing scenes, please.

11. [SPOILER ALERT] He makes amends with his very weird family

More than anything, The Accountant is a movie made for people who watch Jason Statham movies and say, "Hey, I wonder what The Transporter's dad was like?" The Accountant is filled with flashbacks to Christian Wolff's childhood, showing us how his military psychologist father forced him and his brother to fight both each other and other children just to toughen them up.

These scenes feel random and unnecessary, but towards the end you realize they're actually setting up the movie's "big" twist: Ben Affleck's biggest threat, an assassin played with oily club DJ charm by The Walking Dead's Jon Bernthal, is actually his brother! The twist makes very little sense from a narrative perspective, but at least we get to see Affleck find a moment of peace before driving into the sunset in his Airstream, hopefully on his way to a Hummel figurine fan convention.

Dan Jackson is a staff writer at Thrillist Entertainment. He is not an accountant -- but he is on Twitter @danielvjackson.