"It's the moment all of America will be talking about," Bachelor host Chris Harrison booms over our TV speakers as we all gather with our beloveds to watch a heartbroken man jump over a tall fence. That's right, folks, this week on The Bachelor was Fence Jump Week, and boy, was it worth the wait.

First of all, this was fantasy suite week. For the uninitiated, the "fantasy suite" is the week near the end of the season when the contestants on The Bachelor are finally granted the opportunity to do the horizontal tango with each other in a fancy hotel room after weeks of horny frustration and clumsy flirting. It's also a particularly big deal because Colton Underwood, as we all know, is a virgin. We all know this because Colton himself, as well as every single person on the show including host Chris Harrison, takes every opportunity he gets to mention it. In the latest episode, while complaining that he wasn't very flexible, he despondently sighed to poor Tayshia, "It's probably because I'm a virgin." In response, Tayshia laughed like a person who isn't 100% sure if they should be laughing or not. They did not "get intimate" during the overnight portion of their allotted time together.

And, lest we forget, Colton's virginity was such a huge deal during the season of The Bachelorette he was on that it sent him into a crazed rage/fear spiral before he was ultimately eliminated from the competition. So, fantasy suite week was already packed with plenty of special expectations going in that had nothing to do with the fact that Cassie Randolph's father, whom Colton met during the previous hometowns week, decided not to give his symbolic blessing to Colton if he would hypothetically ask for his daughter's hand in marriage, because Cassie Randolph's father is one of the very few people involved with this show who knows what ridiculous pageantry it all is.

Their day together began to sour when Colton came clean to Cassie about her father and told her that, though he'd seemed chipper after his conversations with her family, her father hadn't given him the OK. Cassie, an all-American Christian gal who feels it's important for the future groom and bride's family to be on the same page, was shocked that he hadn't said anything earlier. "And you're okay with that?" she challenged him. Colton mushed his mouth around a little bit before saying something about it "not discouraging" him from pursuing her.

Cassie's dad was then flown in by ABC to make a final appeal to his daughter to please, please stop this nonsense and come back home and date a normal freakin' person. "There shouldn't be any hesitation in your mind when you meet somebody you want to spend the rest of your life with," Cassie's dad said reasonably, and over the course of the conversation, Cassie decided that she needed to break it off with Colton -- making him the most-dumped Bachelor (four times!) in the show's history. But who's counting?

Cassie then proceeded to take approximately 127 hours to break it off with a blindsided Colton, who actually pledged to her that he would kick the other two contestants to the curb for her if that would make her stay. "After today, I just know, for sure, that I love Cassie. Point blank," he'd said to the cameras after the daytime portion of their date. The two go from sitting down inside a building, to walking around a pool outside, to sitting back down while Colton tries to reel Cassie back in. "I don't know where you've been at, verbally," he says, whatever that means. Are they paid by the minute? Girl, just go.

Finally, they get up and take 10 years to walk Cassie to the car, where she kisses Colton again before riding off in tears. Colton walks back up the steps to their cabana before turning around, saying, "I'm done with this," pushing a cameraman to the side, tossing something from one table to another, and striding purposefully towards the 7-foot-tall locked fence gate. While host Chris strolls after him and the cameramen stand in horror, Colton tenses those football-kicking legs of his and jumps cleanly over the fence. Watch this! 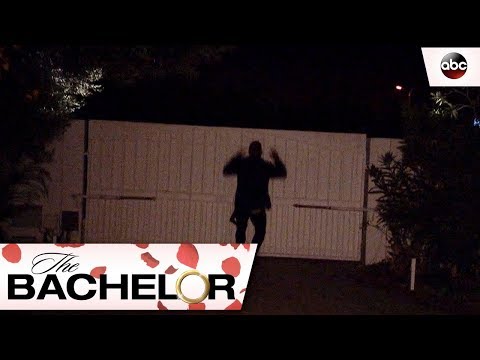 "He just jumped the fucking fence," Chris says, casually chasing down Colton with absolutely no sense of urgency.

Chris and the rest of the producers on the scene go jogging down the creepy pitch black jungle road, shouting, "COLTON," saying, "He's not here," and whistling for him????? "He is gone," Chris says in shock, before a giant "TO BE CONTINUED" title card slaps itself across the screen. So much for Colton's big night.