There's a special kind of sick, gleeful anticipation you get whenever a reality show is set to have an episode featuring your hometown. For people who live in big national hubs like Atlanta, New York, or Chicago, it's probably a little less special, but for those of us not originally from an enormous city, it's a treat! How will your town be represented?? Will they go anywhere you recognize??? Will you get to relive any embarrassing memories from your teens through special locations they visit??

On Monday night, for Peter Weber's final hometown date, The Bachelor visited contestant Victoria Fuller's sunny, sandy hometown of Virginia Beach, Virginia, home of the East Coast Surfing Championships, the hottest statue of the mythical King Neptune this side of the Atlantic, Pharrell Williams, and me. I love to hate The Bachelor in much the same way most people love to hate their hometown, but I have considerably more affection for Virginia Beach than I have for ABC's most manipulative, reverse-engineered, unrealistic reality show -- even though I spend two hours every week with my eyes glued to whatever awkward group dates and hellish skydiving adventures has to offer in terms of real, tangible romance, so who's the real clown here?

The show saved Victoria's date for last, so I had to spend the rest of the episode vibrating in anticipation, taking out my energy by posting a string of tweets about the other three dates that have been called "insane," "unhinged," and "very funny" by my loved ones. Thank you. Nearly 90 minutes in, I finally heard the soft, seductive call of ocean waves crashing against imported sand. Yes. YES. Here it comes. The "Virginia Beach, VA" chyron appeared at the bottom of the screen with a trill of reality show chimes. Victoria leapt into Peter's arms and he held her there like a large frog, while Victoria's very cute black lab Buxton made a last-ditch attempt to escape the whole sordid affair by launching himself into the sea. Sorry, buddy. We're stuck here.

"I want you to, like, see where I come from and for me to, like, be in my element," Victoria murmurs at Peter, gazing with her enormous Alita: Battle Angel eyes into his dead ones. This is, to date, the most enthusiastically positive interaction these two have had on the show. It won't last.

The date she has planned involves doing two things: Old Time Photos, an objectively great tourist trap on the resort strip where you rent old-fashioned clothes (Peter and Victoria opted for what can only be called plantation chic -- yikes!) and pose together for pictures; and going to Victoria's "favorite spot," which turns out to be a very bland bar-cum-outdoor concert space called The Shack, at which Hunter Hayes, who is apparently a country singer, will perform one song. Peter, of course, loves Hayes, and proves this by singing along to a song that includes the lyric "I don't want easy, I want crazy," which is precisely the way Peter has chosen to spend the last few episodes of his Bachelor season after getting rid of all the contestants who were there to simply have a nice, normal time.

This date is boring! To be fair, this episode was filmed in October of 2019, right at the start of Virginia Beach's off-season, which means the Oceanfront is verrrrrry boring. But any resident of VB who knows what they're doing knows that there's other stuff to do that's not hanging out at one bar while a musician sings at you. Call me interesting, but jumping around with a bunch of cold, faceless fans you will never see again at a concert held in a beach town on a cloudy fall day is not my idea of a fantastic date. Virginia Beach is huge!! There's so much one can do to show it off to someone who's never been there. Red Wing Park has a lovely Japanese garden with lots of photo-op red bridges. You can literally hike through First Landing State Park where the colonists first touched down to settle America and crouch in the little hut replicas they used to live inside. There are not one, but TWO enormous lighthouses you can climb up and be super sweaty and miserable inside until you reach the top, and gosh, the view! There's an AQUARIUM with OTTERS IN IT. Is there anything better than an aquarium date?? NO!! 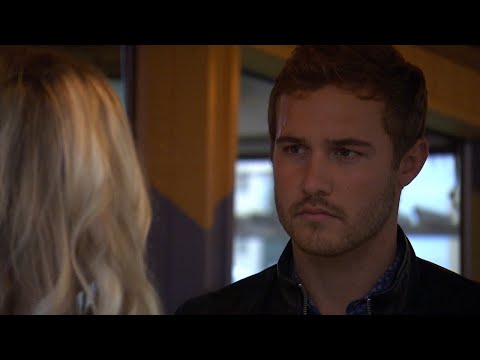 Anyway, the producers of the show are obviously aware of how dull this day is turning out to be, so they enlist a blurry faced ex-girlfriend of Peter's, who somehow lives here now, to drive strife into Peter and Victoria's relationship by telling him, vaguely, to "be careful." If you recall, Victoria also had an ex show up during an earlier date on the show, who turned out to be country singer Chase Rice, who proceeded to make little secretive winky faces at her for the duration of that date like a total prick. At least Peter's mysterious date-crashing ex was ostensibly there to help him out, the yin to Rice's aggressive yang. As George Lucas said, it's like poetry, they rhyme.

To cap off the night, Peter confronts Victoria on the doorsteps of her family's house, asking if she has anything to add to the mystery date-crasher's tale, and Victoria launches into a tailspin, accusing Peter of being suspicious of her and ultimately telling him that he should just go back to his hotel. Later, she meets him in his suite and tearfully presents him with their Old Time Photo, which I'm positive singlehandedly got her the final rose. That's the power of Virginia Beach: even in the offseason, it charms you into thinking there's something worthwhile if you dig deep enough, but all you'll find below the surface is handfuls of sand.