In its opening sequences, The Beach Bum introduces Matthew McConaughey as dirtbag prophet Moondog, ambling around Key West, high off his fucking gourd on a combination of what's likely some potent weed and an endless series of PBR tall boys. One moment, he picks up an adorable little kitten and reads some poetry on a bar stage. Another, he's out to sea, on a boat, flanked by topless women and beating a drum. It's an evocative image, not just because of director Harmony Korine's dreamy 35mm footage, but because of what we know about Matthew McConaughey. The man freaking loves to get naked and rhythmic.

As crucial to the idea of Matthew McConaughey as Dazed and Confused's Wooderson, True Detective's Rust Cohle, or the guy from those Lincoln ads, are the facts of his real-life arrest in 1999. On an October day, a complaint about loud music led police to find the actor in his house dancing around with only a University of Texas bandana on his person. There was reportedly a bong on the table, and yes, McConaughey was banging on the bongos. According to the Associated Press, he was arrested on "on suspicion of possession of marijuana, possession of drug paraphernalia and resisting transportation, according to a police statement." There was an unidentified man supposedly clapping and cheering him on, and while he was briefly detained, he wasn't brought to jail. The biggest mystery of the night, therefore, is still: Who was the man hanging out while McConaughey played bongos in the nude?! Why haven't we heard HIS story?

Ultimately, McConaughey was only charged with resisting transportation. He really didn't want to put on his pants. While the report doesn't say that McConaughey was high off his balls while letting said balls hang out with some bongos, that's very much implied. He eventually paid a $50 fine. All in all, the punishment probably fits the crime.

As far as celebrity scandals go, McConaughey's is one of the most innocuous, hilarious, and fitting. He started his ascent to global fame six years earlier in the aforementioned Dazed, Richard Linklater's hangout movie, playing an overgrown adolescent with a propensity for speaking in blazed aphorisms like "just keep livin'" -- a phrase that has since become McConaughey's personal mantra. His crime simply amounts to being too chill. When asked about spending a night in jail, he responded, zen-like, "I don't want to rent a place there, but it was a nice stay for a night."

The news followed McConaughey. His local glossy, Texas Monthly, gave him the 2000 "Bum Steer of The Year" award, putting him on the cover. But he's also embraced it, letting the circumstances fully meld with his public persona. In 2005, he banged on the bongos on TRL. He's played various drums with both Guy Fieri (in 2010) and the Dixie Chicks (last year). In 2016 he proudly declared to Playboy, "What's wrong with beating on your drums in your birthday suit? I have no regrets about the way I got there." ("There" meaning "jail.") With or without bongos, McConaughey unsurprisingly loves being naked, as Kate Hudson can attest. 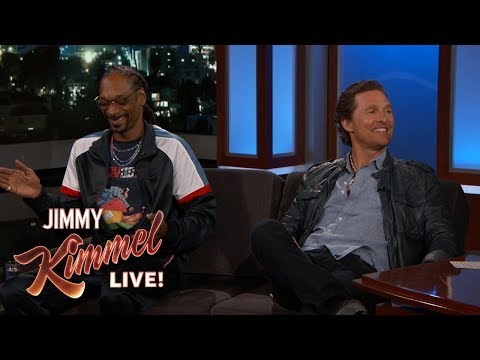 This all brings us to The Beach Bum, which takes the McConaughey legend and heightens it to an absurd degree. What plot there is finds Moondog, returning from Key West to Miami, where his inexplicably rich wife Minnie (Isla Fisher) is throwing a lavish wedding for their daughter, Heather (Stefania LaVie Owen). An R&B singer named Lingerie (Snoop Dogg, naturally) is officiating. He's also having an affair with Minnie, but Moondog's having multiple trysts and no one seems to give a fuck. They all love each other. (It should be noted: Korine wrote the part for Snoop as Snoop, but Snoop insisted on being "Lingerie.") A tragic event that night finds Moondog on the quest to publish his novel. This adventure also lands him in rehab, which he escapes with a side-burned and JNCO-wearing Zac Efron, and later finds him on a dolphin-watching tour with Martin Lawrence's Captain Wack, a man who just really loves dolphins.

Moondog is regarded by his peers (including Jimmy Buffett) as both a genius and the ultimate fuck-up, but every mishap, every scrape he gets into, only adds to his mystique. (It's here we must acknowledge the ridiculous double standard in our criminal justice system that allows rich white people get away with drug offenses for which it punishes people of color. Look at Moondog's antics -- or McConaughey's real-life situation -- through that lens and everything stops being so fun.)

During a Q&A following a screening at the Metrograph in New York, Korine was asked what McConaughey brought to the role. "He's Moondog," he said, adding that the actor had known "smugglers and pirates," with no further elaboration. McConaughey gave a bit of context to that during an appearance with Snoop on Jimmy Kimmel, telling the tale of a man known as "Captain Steve," one of the people on whom he says Moondog is based.

Because while Moondog may play on our ideas of Matthew McConaughey, he's obviously not the man himself. McConaughey's a rich actor who does slick just as well as strung-out. But what makes McConaughey fun to write and talk about is the same reason it's easy to fall in love with Moondog. There's a scampish quality that's key to his essence. And, yeah, sure: It seems like it would be fun to get high with him.