Last November, Netflix released A Christmas Prince, a cutesy rom-com about an aspiring magazine journalist who falls in love with a crown prince -- set at Christmastime for no particular reason other than to ramp up the schmaltz and romanticism. Add snow, mistletoe, and neatly packaged holiday cheer to any romantic comedy storyline, and it’s sure to strike a chord. A Christmas Prince indeed struck a chord, becoming an unexpected hit, a so-bad-it’s-good Twitter sensation that paved the way for a sequel that arriving as part of the streaming platform's ambitious slate of holiday programming. 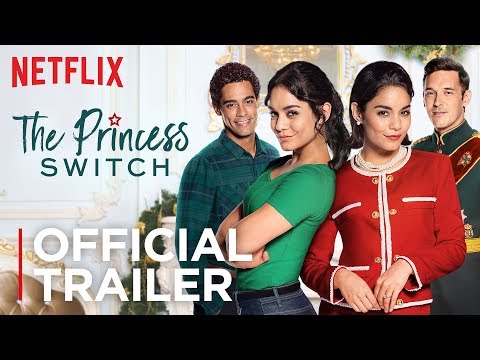 The Princess Switch has a lot of the same ingredients as A Christmas Prince: Mistaken identity, a fake, extravagant European country, royalty, and an unlikely pair falling in love amid the dressings of Christmas. One could posit that they even take place in the same ever-expanding Netflix holiday universe... if it weren’t for the fact that the characters in The Princess Switch literally watch A Christmas Prince.

That small, somewhat uncanny detail of The Princess Switch is all that really anchors the story to reality. The Princess Switch tells the story of two identical strangers, played by Vanessa Hudgens. There’s Margaret, the posh Duchess of Montenaro who wants to experience normal life and convinces her lookalike, Stacy, a baker from Chicago, to switch lives with her. Stacy finds herself having to court Margaret’s fiancé Prince Edward, while Margaret spends time as Stacy with Stacy’s best friend and baking partner Kevin. Under their respective disguises, the two obviously fall in love with the guys they're not "supposed" to be with. It’s a tale as old as The Prince and the Pauper.

But The Princess Switch tells it with mechanical precision and barely any emotion. Margaret, Stacy, Edward, and Kevin might as well be robots, pre-programmed to fulfill their respective roles within a predictable and lifeless story. It unintentionally unfolds like a Westworldian holiday narrative, the characters close, but not exact, approximations of real people. Maybe The Princess Switch takes place inside a snowglobe. That would make more sense than most of the movie’s plot.

Plot, of course, doesn't really matter when it comes to movies like this. The Princess Switch trusts that it can coast by on its premise alone, the fantasy of identical strangers meeting and suddenly having access to the life they've always wanted. It throws several rom-com and holiday movie conventions into the mix: A makeover montage, perfectly positioned mistletoe, a horseback ride through the snow, a magic-adjacent older man who is... maybe Santa? Maybe pulling the strings to all these romantic shakeups? The truth of his identity is never revealed, and again, it’s not like The Princess Switch needs a coherent mythology, but it's an unnecessary detail that just reiterates the fact that the movie throws a bunch of tropes into the mixing bowl and then hits chaos mode.

It's limp in its fantasies, which are lived by characters who could generously be described as cardboard cutouts. Stacy bakes, plans, and fears spontaneity, and that's about as much of a personality as she's given. And yet, her romance with the prince does end up the more compelling love story of the film by default. There's zero chemistry to be found between Margaret and Kevin, mainly because Kevin is walking, talking exposition more than an actual character.

In a sense, though, The Princess Switch is Netflix's content strategy distilled into its purest form: Find the entrenched competitor, and replicate its formulas ad infinitum until the streaming service wins the battle. The Hallmark Channel may have the upper hand in the conservative trope-laden holiday fare, but it's likely no match for Netflix's scale. If A Christmas Prince was already an amalgam of holiday movie and rom-com tropes and clichés seemingly determined by an algorithm, then The Princess Switch is weird mutation of that movie -- a derivative of a derivative. It could still be fun, if it weren’t so lifeless, and the reality is that next year will bring even more derivatives to add to the streaming library.