The One Thing That Ruined 'The Golden Compass' Movie

Calling books unadaptable is a trend that's been around since people started turning books into movies. Philip Pullman's His Dark Materials trilogy, which began in 1995 with the publication of Northern Lights (known as The Golden Compass in the United States and some other countries), is coming to our TVs beginning November 4 with an eight-episode series produced by HBO jointly with BBC One. But this is not the first time this complex book series has gone from page to screen. All the way back in 2007, a lifetime ago, New Line Cinema, hot off its success with the Lord of the Rings trilogy, brought The Golden Compass to theaters... with disastrous results.

What happened? The complex plot was dumbed down to fit a more traditional film format. The controversial religious aspects of the text were softened, perplexing fans and critics alike. And meddling by the studio completely cut out the book ending, saving it for a second installment that never happened. As a huge fan of the books, I remember being so stoked for the movie, and then so disappointed coming out of the theater. Now that Pullman's story is being adapted once again, this time in a more appropriate episodic format for its first season, I figured it was time to revisit the movie to see if my opinion had changed at all. 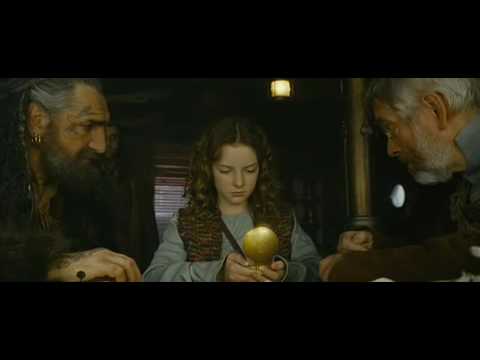 Here's the thing: The Golden Compass is kind of... fine? As an adaptation of the start of one of the weirdest and most esoteric "children's" book series in the world, it more or less sucks (we'll get there). But as a movie about a young girl named Lyra (Dakota Blue Richards) living in a world where our souls manifest themselves outside our bodies in the form of animals, it's pretty okay! It's not good, but it's okay. Which is why it's so maddening knowing how good it could have been, if it weren't for the one thing that completely dooms it: The Golden Compass doesn't trust its own audience to understand what a "golden compass" is.

Lyra's alethiometer, a round object like a large pocketwatch, is built like a compass (hence the title), with a bunch of little needles like hands on a clock face that the user can move around to point at any combination of symbols situated around the face, which all have near-infinite sets of meanings. It's given to her at the beginning of the movie by the Master of Jordan College in Oxford, who explains that it "tells the truth," answering whatever question the user asks it by moving the needles. It's kind of a confusing concept: in the source material, no one can actually explain where it came from or why it works the way it does or what it has to do with the controversial substance called Dust, aside from the fact that it was partially made out of Dust somehow, but the movie attempts to make it easier for us by generally watering everything down.

Every time Lyra reads the alethiometer, we're treated to a weird sparkly montage of still images -- taken directly from footage that has either already been shown in the movie or will be shown minutes later -- in order to represent, on a visual level, what's going on in Lyra's mind. The first time she does it, she sees a couple agents of the child-napping "Gobblers," a shot of her own map of northern Europe in the house of Mrs. Coulter (Nicole Kidman), and an image of the missing children she's hoping to find -- all of which we already saw in previous scenes of the movie.

This might seem like needless nitpicking when there are so many other problems going on, but this type of overexplanation is endemic to the whole film, which begins with a lengthy expository voiceover from Eva Green's witch character Serafina Pekkala explaining parallel worlds and daemons and Dust -- all concepts that the book, in its delicate construction, allows us to more or less figure out on our own. Pullman's book, and the series it handily sets up, deals with extremely complex themes and set dressing, from a monarchy of armored polar bears to a theocratic organization that basically rules the world, wishing to suppress any notion of parallel worlds in which its iron fist may not exist at all. To fit all of that into one movie -- which was actually cut from two hours-plus to a more kid-friendly two hours -- was an exercise in futility anyway, and this compression of the story removed any teeth it had.

That's the thing about this whole book series: We won't know if the creators of the film -- or of the show, for that matter -- truly get that they're adapting a story about a broken family arguing about which one gets to kill God in order to bring freewill to the multiverse unless they get to the much weirder second and third installments. The Golden Compass was such a failure because it erased many of the metaphysical aspects that make the book series so rich, so that it could appeal to as wide an audience as possible. A story about a young girl who falls headfirst into a quest to stop religious zealots from robbing children of their literal souls became a fantastical yarn of a young girl who rides in a bunch of boats and befriends giant bears and sees the whole thing as a grand adventure, more in line with 2005's The Lion, the Witch and the Wardrobe adaptation than the more adult-oriented The Fellowship of the Ring movie.

It's so frustrating because it's undeniable that the movie looks wonderful: The cast, made up of blockbuster talents like Nicole Kidman and Daniel Craig, is enviable; even Pullman himself conceded that he should have made Mrs. Coulter (who, as he wrote her, has black hair) blonde in his books. Not to mention all the computer-animated bears and airships and daemons and ice-scape visual effects that won the movie its only Academy Award (and the expense of which effectively killed New Line Cinema). But The Golden Compass is an adventure movie that isn't supposed to be just an adventure movie, a coming-of-age story for young adults that hints at explorations of religion and free will that only grown-ups would fully understand. Philip Pullman's books treat the children who read them with a very mature, adult sensibility that trusts them to figure some things out on their own; the movie, in its self-conscious desire to cram in everything it can while satisfying no one, can't stop holding our hand.