When Thrillist visited the Vancouver set of The Magicians last fall, the Syfy series had just wrapped the 10th episode of Season 4, a musical titled "All That Hard, Glossy Armor." Various cast members were trying to recover from losing their voices -- Summer Bishil's poor throat was extra raspy -- and they'd also had a close calls with wildlife, when three bears attempted to crash the set.

Perhaps they heard about Margo's campaign for talking animals, or perhaps they were attracted to all the food and lights. "There were bear horns going off in the middle of the scene," said Brittany Curran, who plays Fen. "Trevor [Einhorn, who plays Josh] peaced out after that. He grabbed his coat and left." With the finale airing tonight, we asked The Magicians co-creator Sera Gamble and the rest of the cast to reflect on how Season 4 stand-out "All That Hard, Glossy Armor" came together. 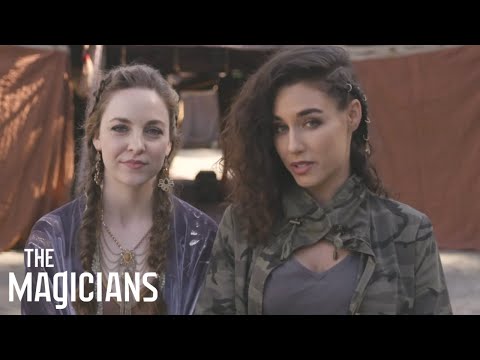 Sera Gamble:The Magicians has a writers room full of avid musical theater fans, but it's really hard to justify a musical number on a TV show. That's a challenge even for those of us who do believe people should sing about their feelings. We don't ever want to say that this is something is going to happen every season. We want the show to stay fresh.
Jason Ralph (Quentin): It's a pretty annual thing, for us to do a musical. This year, we're doing "Hello, Dolly." Hale's Dolly.
Hale Appleman (Eliot): [To Jason] You are a cheeky boy. Yes, we're doing a musical. It's Margo's desert quest, which is one of the more epic and incredible sections of the books.
Rick Worthy (Dean Fogg): Our High King Margo finds herself in the desert on a sort of spiritual walkabout, and she rediscovers her powers as a woman. Not just for her, but for all women.
Appleman: Each song is kind of a backdrop to further propel her on this journey.
Summer Bishil (Margo): Oh my god. I just wrapped the musical yesterday, I was just raging in the desert last night, and I woke up crying today just from like, fulfillment. I had suppressed myself for a while, so it was just me coming back to myself. I have never experienced so much support from a cast like that in my life. It was incredible.
Trevor Einhorn (Josh): It doesn't feel like we're just singing. Everything sort of has a purpose, because Margo's character sort of allows us to dive deep into what this is.
Appleman: I happen to be her spirit totem. Her acid trip version of Eliot that appears as a mirage in the desert and starts serenading her, goading her to follow him, to lead her to the right place at the right time, so she can fulfill her destiny. I'm kind of there as a facet of her ego, a facet of her former best friend, kind of like the splashy parts of herself. What she is actually kind of letting go of.
Worthy: Each character appears to her as sort of a vision in her mind. Each of us represents something to her. Dean Fogg appears because he represents wisdom. He's the professor. He's there to pass down the wisdom.
Bishil: I literally tell him, "You do whiskey. You don't do wisdom."
Worthy: I kept playing with this idea that he should appear with a drink in his hand, and they said, "Nah, that's a little too much."
Bishil: But everybody is there for a specific reason, like an element or dimension of her personality, or her inadequacies. They are projections of those things.
Brittany Curran (Fen): I'm lost innocence.
Einhorn: I'm guilt. I play that card very well. "You're going to leave me now?"
Olivia Taylor Dudley (Alice): I don't know what Alice represents to Margo. Intelligence? Beauty? I'm just making that all up! [Laughs]
Worthy: So I get the script, I'm reading the episode, and I'm like, "Wait… What part of this song do I have to sing?" [Sings] "I made up my mind, here I go again…" It's Whitesnake. "Here I Go Again"
Jade Tailor (Kady): I represent Margo's feelings of inadequacy -- in this case, regarding her voice, her octave range. So when I sing, it's her perspective of me, which is a little bit altered from what I actually am. I'm just kind of showing off, and I'm being super tough. I'm like the Tawny Kitaen from the Whitesnake video. And I'm also doing "Storm Coming"...
Appleman: It's like a random Gnarls Barkley song. I still don't understand that. I didn't try to sing it. I sing the Pretenders' "Don't Get Me Wrong." I sing "Beautiful Dreamer," more like the Roy Orbison version, I guess.
Einhorn: Some of us are just shower singers, but some... Hale has just a phenomenal voice. And Jade.
Bishil: Rick Worthy's voice is honey.
Worthy: We went into the studio, and I went through two-and-a-half hours of torture. The musical director was really trying to get me to hit the right note, and I finally hit the right note, and he says, "Good. Stay there. Now we're going to do it again." And we discovered that I tend to sing better falsetto. So I did it as both versions, one in my lower range, my natural range, but a bit lower, maybe, and then higher. [Co-creator] John McNamara said, "That's really interesting. You have a deep voice, but you have more control over it when you sing higher." It's kind of like Prince. Prince had a deep voice, but often sang falsetto.
Gamble: John McNamara called me, and he said, "I have good news, and bad news. The good news is that Rick Worthy has an amazing singing voice and really great pitch. The bad news is that it's only in falsetto." And I believed him!
Appleman: Jason's got the voice of an angel with laryngitis.
Ralph: They didn't want me to overshadow the rest of the cast. It's just not fair to them. It's an ensemble show, so we're sharing the wealth.
Bishil: And then there's Summer, who also kind of sings! [Laughs] Margo is supposed to be somewhat unrecognizable by the end of her journey, emotionally and cognitively, so I wanted her voice to change a bit as well. And that was a struggle, because I have a command over my speaking voice as an actor, and I've made it lower and more guttural for Margo, but I wanted there to be more of a physical transformation at the end of her quest. I wanted to reflect that vocally. And I feel pretty good about that.