What to Know About 'The Magicians' Before Watching Season 4

After spending last season on an epic quest to return magic to the world, many of the memory-impaired characters returning in The Magicians Season 4 seem unaware that magic was ever turned off, or even existed in the first place. That might not be so bad if they hadn't unleashed a new Big Bad called the Monster and didn't lack the means to protect themselves against it. The few characters who do have their memories and magic intact aren't at full strength, thanks to the Library's new role in regulating access to power. If your memory's been wiped, too, you're in luck: We visited The Magicians set last fall and asked the cast and co-creator Sera Gamble to answer some burning questions about what's at stake in Season 4, which premieres Wednesday, January 23 at 9pm on Syfy. 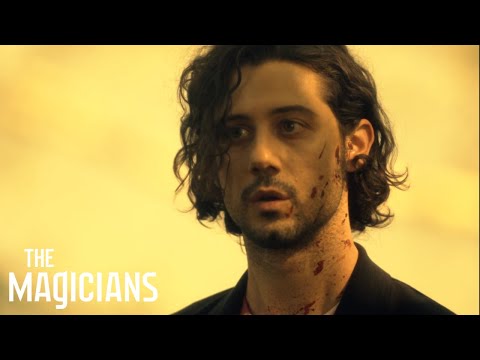 Why is (almost) everyone having an identity crisis?

"Their lives were in grave danger," explains Dean Fogg in Season 4. "I cast a spell that erased their identities and gave them new ones." He bases their new identities on a cheesy graphic novel that has a lot of characters, each with detailed backstories, so that he could look at the new personas when he casts the spell. Actor Arjun Gupta, who plays Penny, explained that the reboot process was like having another non-magical character placed on top of their original characters, so they would have no memory of magic. While they're still there inside, the outside world sees the other person. "It's like a glamour, a façade, a fake veneer -- we're showing the outside world," said actress Stella Maeve, who plays Julia Wicker. "And it made our lives as actors easier! There were scenes with the new Julia that I didn't even have to shoot!"

So what are their new identities?

Each character, for the most part, still has the same broad strokes of their previous identities. Quentin Coldwater (Jason Ralph) is Brian, an English professor. Margo Hanson (Summer Bishil) is Janet Plutchinsky (a nod to her character's name in the books), a fashion editor at Hipbone with a penchant for menswear and playing the alpha mean girl. "I made the decision that she still is who she is at her core," Bishil said. "Having magic was in no way her identity." Josh Hoberman (Trevor Einhorn) is Isaac, a five-star Uber driver who makes his own mints. "He's still very much a people pleaser," Einhorn said. Penny Adiyodi is DJ Hansel, which is probably the biggest departure as far as identity swaps are concerned. "We just wanted to change Penny to be the happiest guy in the room," said Gamble. "It was kind of fun to just lean into how corny that was," said Gupta.

Speaking of Penny, will the real Penny please stand up?

In case it wasn't clear, it's Penny 23 who had a personality transplant, not our original Penny, AKA Penny 40, who is not quite dead or alive, whose body succumbed to magical cancer, whose spirit remained on the astral plane, and who is stuck fulfilling his indentured servitude contract with the Underworld branch of the Library of the Neitherlands but is finally accepting where he is. "Dying doesn't mean the same thing on our show as it does for other shows," Gupta noted. We're going to be spending a lot of time with the more decisive Penny 23 this season, the actor said, and we're even going to get at least one scene with both Pennys together. "There's one episode where I end up in a few different timelines," he teased. "But other than that, we've stripped down the amount of times we make the audience deal with multiple timelines, because it does get kind of confusing." The little time we do get with the more sarcastic Penny 40, however, will shed some more light on the Library and the Underworld branch, which has a different perspective than the rest of the Library, being dead and all. Gupta said that shooting a five-page scene with a double-sided Penny was fascinating, for "just the challenge of making the two different [and] making sure the subtleties are working."

Will Kady please stop being defined by her relationships?

Glad you asked! As one of characters not from the books, Kady was created for the TV version so that Penny could have someone to talk to in the pilot, according to co-creator Sera Gamble. So in seasons one and two, Kady was "the girlfriend." Granted, it was a nuanced version of a girlfriend character, and the two characters had amazing chemistry, but still. "There's something about it that feels a little gross and old-fashioned when you say it that way," Gamble admitted. It started rubbing her the wrong way to think that one of their series regular actresses was defined in those terms, and so they found a way to reboot the character through the mind-wipes. When Kady wakes up with a new identity, she's Sam Cunningham, a kick-ass narcotics officer with the Seattle P.D. (Kind of a nice symmetry to her addictions and criminal side.) "She was always the sidekick, and now she's the star of her own movie," Gamble said. "She is the best at what she does, and it would never occur to her to be somebody's sidekick." And should she eventually reclaim her old identity, Kady will remember that feeling, which will start to destroy some of the assumptions she made about her life before. Actress Jade Tailor hopes Kady redefining herself will inspire others to be the heroines of their own lives, too. "Hopefully we're starting to shift that paradigm in a big way," she said.

Does Julia have any residual god powers?

"It was great while it lasted!" Maeve said with a laugh. After giving up being a goddess in order to remake the seven keys in last season's quest, Julia still is... something. Not quite human, but not quite a goddess, either. Once she gets her identity back, she'll need to figure out what that means. "She's like someone who's gone to the moon and come back to earth," Gupta said. "How do you not exist as a changed person when you've had this experience that no one else has had?" Luckily, Julia will have a rather devoted Penny willing to help her sort that out. (Remember, in Penny 23's timeline, he and Julia were soulmates.) "It's nice to see that develop," Maeve teased.

What's the deal with Eliot?

Eliot Waugh didn't get a new identity like the rest of his friends. Instead, he's in more of a body snatcher situation, with the Monster, the Big Bad of this season -- an entity created by the old gods and imprisoned for thousands of years inside Castle Blackspire -- using Eliot's body as a host in his attempt to satisfy his insatiable, never-ending want. Actor Hale Appleman described the Monster as an "ancient god-like creature who has been swapping bodies for millennia," but has no impulse control and no understanding of empathy. "He's a baby child, goo-goo-gaga, who is just trying to find a friend, but he also has a vendetta hit list." Appleman modeled parts of his performance after Psycho's Norman Bates (his innocence and co-dependence) and Audrey Hepburn (her speech affectations, such as the way she hangs onto consonants). It gives the Monster a fragile quality and makes us feel empathy for him, even if he lacks empathy himself. For starters, he's also having a lack of total recall. "There are huge holes in his memory that he's excruciatingly aware of," Gamble said. "Part of the destructiveness that's coming out of him, it's his need to discover the truth about himself."

The problem is: The Monster has immense powers and no qualms about hurting others. Eliot's friends aren't sure if Eliot is still in there. They want the Monster to keep Eliot alive, but at what cost? Should they allow the Monster to stay on his destructive path in order to save their friend? "Some are like, 'He's dead, screw it, move on.' Others are like, 'I can't,'" Einhorn said. "It brings a lot of tension." Bishil said that she missed acting opposite her usual scene partner, to the point where she teared up when the two actors finally got to reconnect. "We did a scene where he's not back, but he's not gone," she said, "and it got ridiculous. I was crying on his coverage, and he even started crying on my coverage."

Not so great, considering her friends have forgotten her, and despite knowing the Monster is on the loose, she can't do anything about it. "It's very lonely and tragic at first," actress Olivia Taylor Dudley said. Alice would still argue that what she did was with the best of intentions and meant for the greater good, but it just backfired and almost killed everybody. She's got a lot of amends to make. But she's also in a good spot to start collecting information on how to fight back against the Library. "She's front and center with that," Dudley said.

What was that about the Library?

The Library first kept information locked up, thinking it would be dangerous if it fell into the wrong hands, and now it's applying the same kind of control to the flow of magic -- hoarding all the magic and rationing it out in small doses. "These are really well-meaning, hyper-educated people who have spent an inordinate amount of time studying history and can really justify every single thing they do," Gamble said. "The Library's job is to preserve the knowledge of magic, and when there was a free flow of information and of magic, that caused things like the ability to kill a god, which got magic turned off. Wouldn't it be better if they just put a lid on the amount you can have without their permission, so that they can kind of just help you figure out whether you're going to blow up the planet?" All of that sounds rational. But then consider the position of magicians such as the hedge witches, who never had much access to begin with. "It's like, 'Wait, I was living on the minimum wage before, and now there's no minimum wage,'" Gamble said.

The result is the rise of a fascist regime. "There's a reason fascism comes up again and again in human history," Gamble said. "It's because it's a really reasonable mistake that smart people make." We also see the need for a resistance movement, because even those in league with the Order, such as Dean Fogg, are unhappy with the current state of affairs. "He feels like he's reporting to a sort of rigid, structured, authoritarian political entity that doesn't listen to anyone except themselves," actor Rick Worthy said. Some would argue that the power should belong to the masses, so that the magic is distributed more fairly. "What's the most equitable system for magic to exist in the world?" Gupta said. "It's about rebuilding a system." Viva la revolución!

Jennifer Vineyard is a frequent contributor to Thrillist.