What to Remember About 'The Mandalorian' Before Starting Season 2

Who is Moff Gideon again?

The first season of The Mandalorian packed a lot of story into its eight half-hour episodes, and the second season of the Disney+ series promises to go even deeper into Star Wars lore, teasing appearances from beloved characters in other Star Wars shows and a story revolving around a certain ancient weapon and a mysteriously nameless alien race. But before you dive into the new season, you may want to refresh yourself on what happened in the first—it's been a whole year, after all. You may only have a vague recollection of who Moff Gideon or Greef Karga are. Short of rewatching the whole first season—which would only take about four and a half hours, it's not a long show—here's a comprehensive recap of everything that happened at the end of Season 1, plus some background information you should know for Season 2.

When does it all take place?

The show is set in 9 ABY, which in Star Wars years means nine years "After the Battle of Yavin," during which the Rebel Alliance destroyed the Death Star in the first Star Wars. To make things simpler to understand, years in the Star Wars canon are counted forwards and backwards from the Battle of Yavin—for example, The Phantom Menace takes place in 32 BBY; The Force Awakens takes place in 34 ABY. The Mandalorian is set five years after The Return of the Jedi, but 25 years before the first Star Wars sequel, in that brief muddled time period between the fall of the Empire and the rise of the First Order. The show contains glimpses of what life is like for all the regular joes who aren't named Luke, Leia, Han, or Chewy, who have to go about their lives in a galaxy completely torn apart by the previous war. Peaceful, it is not. 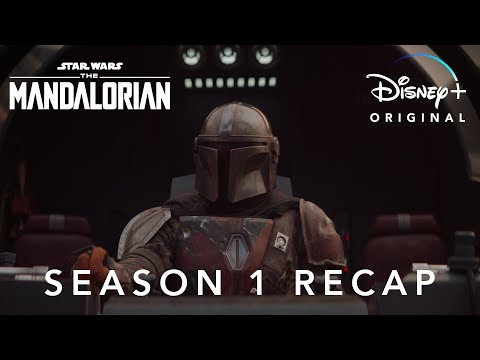 What happened in The Mandalorian's Season 1 finale?

After careening around the galaxy getting into misadventures on all kinds of planets, Mando (Pedro Pascal) is informed by Bounty Hunters' Guild operative Greef Karga (Carl Weathers) that his planet Nevarro is about to be overrun by an Imperial remnant. Offering to rescind the hit the Guild put out on Mando, Karga asks him to come help him fight the troops off. Mando knows it's a trap, but he, the Child, Cara Dune (Gina Carano), Kuiil the Ugnaught (Nick Nolte), and a reprogrammed IG-11 droid (Taika Waititi), go anyway.

Mando and his crew meet Greef Karga and his associates, but on their journey to the town, they're attacked. When the Child heals Karga's wounds, Karga decides he can't hand the Child over to the mysterious Client (Werner Herzog). Instead, Cara Dune pretends that she captured both Mando and the Child, but when they get there, Nevarro is shot up by Imperial troops, killing the Client. Moff Gideon (Giancarlo Esposito) arrives and boasts that he's about to capture the Child for himself, Kuiil is killed, and IG-11 rescues the Child from Imperial troops. Mando, Cara, and Karga hide from Moff Gideon in the sewers, where IG-11 and the Child find them, but in the fight Mando is injured and IG-11 stays behind to doctor his wounds, removing his helmet and revealing his face.

They find shelter in the Mandalorian enclave, where the Armorer charges Mando to bring the Child back to its ancestors, explaining that it has powers similar to those of the ancient Jedi. She also gives Mando a jetpack and his signet of the Mudhorn. The group escapes down a lava river, and IG-11 sacrifices himself by staying behind to meet the ambush troops and activating his self-destruct. They're met by Gideon in his TIE Fighter, which Mando plants explosives on and blows up. Karga asks him to return to the Guild, but Mando says he has a duty to the Child. He buries Kuiil, Cara stays on Nevarro to act as Karga's enforcer, and Gideon carves his way out of the TIE Fighter wreckage with a Darksaber.

Which characters do I need to remember?

You'll need to remember Mando, obviously, who was revealed in the finale to be a human named Din Djarin who was taken in by the Mandalorians and raised as one of their creed after his parents perished in the Great Purge, when the Empire killed most of the Mandalorians and forced the remaining members of the tribe to go into hiding. Baby Yoda—okay, okay, the Child—a nameless member of Yoda's mysterious extraterrestrial race who possesses the same Jedi powers, is also very important, though we don't know much about him/her/them.

You'll also need to remember Cara Dune, an Alderaanian mercenary who joined forces with Mando to fight a remaining faction of the Empire; and Greef Karga, an agent of the Bounty Hunters' Guild who is responsible for handing out Mando's bounty chits, and who eventually becomes another of Mando's allies, fighting alongside him against Moff Gideon.

Which brings us to Moff Gideon, who is revealed to be the leader of an Imperial remnant who wants to use the Child's powers to do bad stuff, probably. Mando also recognizes him as a former officer of the Empire's secret police when his home planet Mandalore was sacked. Gideon was defeated in battle on Nevarro, but survived his TIE Fighter crash by slicing his way out of the wreckage with the legendary Darksaber, a weapon stolen from the Mandalorians.

It's also likely that Fennec Shand (Ming-Na Wen), the bounty hunter in Episode 5 who survived her confrontation with Mando, may also show back up this season.

Are there any important new characters?

Yes! Rosario Dawson has been confirmed as the Togruta Jedi master Ahsoka Tano, who was once the Padawan of one Anakin Skywalker. If you don't know who that is, you may want to check out The Clone Wars animated series to brush up. Katee Sackhoff, who voices the character Bo-Katan Kryze in The Clone Wars and Star Wars Rebels, will be playing her character in Season 2, and Temuera Morrison, who played Jango Fett in Attack of the Clones and voiced clone warriors in The Clone Wars, will be in this season playing Boba Fett, the Mandalorian bounty hunter who started it all.

Why is the Darksaber such a big deal?

The Darksaber is a legendary lightsaber crafted by Tarre Vizsla, the first Mandalorian inducted into the Jedi Order, more than a thousand years before the events of The Mandalorian. The weapon was kept in the Jedi Temple after Tarre's death, but stolen by members of his family, House Vizsla, during the Mandalorians' conflict with the Jedi, and handed down through generations. During the Clone Wars, Darth Maul wielded the Darksaber after taking it from Pre Vizsla, and during the Imperial era, Mandalorian weapons expert Sabine Wren got hold of it, and later gave it to Bo-Katan Kryze, a Mandalorian lieutenant of terrorist group Death Watch. By the time of The Mandalorian's finale, Moff Gideon has somehow obtained it. Given that both Bo-Katan and possibly Sabine Wren (maybe played by Sasha Banks, who appeared in the Season 2 trailer) will be in the show, we'll probably get a lot more Darksaber lore in the coming weeks.