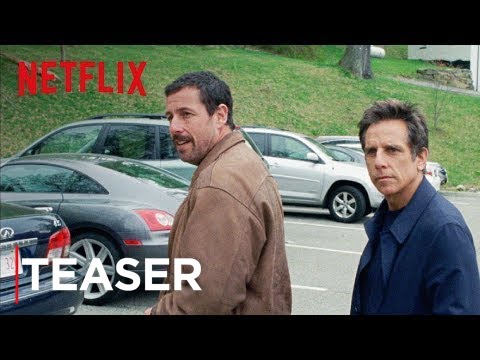 After goofball outings The Ridiculous 6, The Do-Over, and Sandy Wexler, Adam Sandler returns to Netflix this fall in... a movie that looks nothing like The Ridiculous 6, The Do-Over, or Sandy Wexler. From The Squid and the Whale director, Noah Baumbach, The Meyerowitz Stories (New and Selected), looks like it's going to be emotional as hell. In other words, the Netflix users who've watched more than 500 million hours of Sandler's antics are about to see the other side of the star.

Meyerowitz tells the "comic intergenerational tale of adult siblings (Sandler, Ben Stiller, and Elizabeth Marvel) contending with the long shadow their strong-willed father (Dustin Hoffman) has cast over their lives." Emma Thompson, Adam Driver, Candice Bergen, Judd Hirsch, and Rebecca Miller also appear. The dramedy debuted at Cannes earlier this year to favorable reviews, with many critics pointing out some variation of, Yeah, wait, you guys, look, this is a Sandler role you might not wanna miss.

"Sandler's core as a performer has always been self-loathing; in his best comedies, he weaponizes it with humiliating ruthlessness," the Village Voice said. "Here, however, he internalizes it, as his character struggles both to raise his precocious college-bound daughter (a wonderful Grace Van Patten) and bond with his judgmental, old-school–New York art-elite dad."

"Adam Sandler is good," Vanity Fair wrote. "Even if Sandler's immature comedies make you ill (an understandable reaction), his turn here as the neglected older son with a big heart and a limp is tremendous."

"With no shtick to fall back on, Sandler is forced to act, and it’s a glorious thing to watch," Variety said. "Even for those fans who like him best in perpetual man-child mode (don’t worry: the character is a full-grown variation on that familiar Sandler prototype)."

Not to mention he wears shorts, plays the piano, and sports a mustache. Crazy! Catch this side of Sandler and more when Meyerowitz hits Netflix on October 13.