The series, from animator Pendleton Ward and comedian Duncan Trussell, turns all of the metaphysical subtext of 'Adventure Time' into frank conversations.

The brainchild of Adventure Time creator Pendleton Ward and Duncan Trussell, comedian and host of The Duncan Trussell Family Hour podcast, The Midnight Gospel is an eclectic middle ground between podcast and cartoon. Its concept arose from the friendship and mutual respect between Ward and Trussell, and the former eventually pitched the idea. Although the show has arrived in an uncannily appropriate time, The Midnight Gospel has been in development for years.

“With a show like this, it’s like, how are people going to accept it?” Trussell says over the phone. “I love the show, but it’s kind of like when you’re trying a new joke on stage. As a comic, you think it's funny -- you never know for sure. The difference, though, is this is a joke you’ve been working on for two years.” 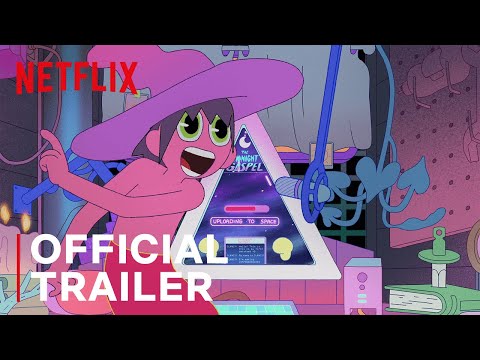 Released on the trippiest day of the year, Ward and Trussell’s ambitious collaboration is finally available to the masses. By combining Ward’s trippy imagery and the forthright metaphysical nature of Trussell’s podcast, the show’s half-hour morsels achieve a rich blend of outlandish animated capers and crucial perspectives on navigating one’s existence. The result is a legitimate visual podcast. Sure, many podcasts -- and, interestingly enough, not Duncan’s -- offer supplementary video footage for those looking to pod lite, but The Midnight Gospel creates a world of its own where its dialogue can flourish.

“Any experiment in converting the medium of podcasting into something that people can watch is fantastic,” Trussell says. “What podcasting represents to me is that authenticity and vulnerability that’s sometimes missing from shows on TV, so I think it’s really good for people to see that -- you realize you’re not as crazy as you thought.”

Grounded in an otherworldly dimension called the Chromatic Ribbon, the show is centered around Clancy (voiced, admirably, by Trussell), who uses a vagina-resembling multidimensional simulator to visit worlds facing unique apocalyptic threats and interview the beings there for his pod-- er, spacecast, The Midnight Gospel. Clancy’s journey as a spacecaster materializes as audio clips extracted from The Duncan Trussell Family Hour are weaved into Ward’s art, with real-life guests, like Dr. Drew Pinsky, comedian Maria Bamford, spiritualist Ram Dass, and others, reimagined as other life forms throughout the multiverse. Clancy always manages to nab a free pair of shoes from his journey.

Thus, some of the most thought-provoking television dialogue of 2020 is found in The Midnight Gospel -- they’re just tucked into preposterous scenarios. Topics such as death positivity, drug use, and spirituality soundtrack utter, usually violent, silliness, from deer-dog hybrids mangling baby clowns to a knight seeking vengeance against an ass-wielding villain. However, Trussell reveals that there’s more to the absurdity.

“Anything you see in this show -- there is intentionality behind it,” he says. “In the beginning, we were considering doing absurdism and just putting crazy shit on the screen, but we decided that was so lazy. There has to be some reason.” That manifests in many ways, like in episode 2, "Officers and Wolves," where writer and activist Anne Lamott, as Sarah the giant deer-dog, opines on her lack of fear of death as she's wheeled to the industrial meat grinder run by a bunch of clowns.

One of the show’s chief accomplishments is its ability to balance such gripping dialogue with such absorbing animation. That balance, however, is a delicate one. In episodes like “Hunters Without a Home” and “Annihilation of Joy,” The Midnight Gospel sprays word vomit like it's air freshener, and the conversations -- while still fascinating -- overpower the visuals. When that happens, it’s like you’re listening to a podcast while watching Adult Swim with the sound off.

The show truly excels when the lines are blurred, with irreverent animation competing with meaningful commentary for your attention. Those warring components inherently fuck with your senses, and the feeling of sensory overload persists throughout the entire season. Yet surprisingly, it works more often than it doesn’t. Large-scale guerrilla warfare, a zombie apocalypse, and other imagery that you would consider compelling adorn the background of each episode, but they don’t detract from Clancy’s interviews with his interdimensional guests. Instead, they’re blink-and-you-miss-it moments that pack welcomed doses of comedy into a journey that gets pretty dark and uncomfortable at times.

For a show where the protagonist sticks his head in a giant vagina every episode, The Midnight Gospel has serious emotional and topical range. It’s a four-hour(ish) trip that brings existential conversations to the forefront of popular culture, teaches you the importance of reading FAQs, and everything in between. The more lighthearted nature of the first four episodes sucks you in like Clancy’s simulator, properly preparing you for the emotionally intense back half, which concludes in a glorious and touching manifestation of one of the show’s most essential concepts -- being present.

The unlikely pairing of Pendleton Ward’s familiar mind-bending art style and Duncan Trussell’s podcast interviews is executed with an incredible finesse. Past its brilliant concept, the show -- by design or not -- disrupts typical “binge and on to the next one” behavior. Running through it is honestly an easy feat, but there is so much to unpack, both visually and aurally, that you owe yourself a rewatch or two. Netflix’s The Midnight Gospel stuns, and a deeper foray into Clancy’s adventures in the Chromatic Ribbon is well-deserved.

Joshua Robinson is a contributor to Thrillist.
Our Newsletter