'The Net' Is Even Weirder Than You Remember

The internet of 1995 was a dizzying, mind-blowing, perilous, and slow-loading place, as we learned not only from amazing segments on the Today show and on MTV, but also from Sandra Bullock in the movie The Net. With apologies to Johnny Mnemonic, Goldeneye and Hackers, no other 1995 movie captures the highs and lows of Web 1.0 cybersurfing quite as perfectly as The Net. When Sandy logged on, so did we.

In the high-concept thriller, Bullock, fresh off Speed and While You Were Sleeping, plays Angela Bennett, a quiet computer analyst who spends her days and nights hunting for bugs in software, logging on to order pizza and revealing way too much information about herself in chat rooms, Her fairly lonely existence in Venice Beach gets turned upside down after her employer FedExes her a floppy disk that provides backdoor access to classified information she should not be looking at. Very quickly, Angela's colleague is killed, an attempt is made on her life, and her identity is stolen. She has no choice but to go on the run to clear her name.

The Net -- directed by Irvin Winkler and written by John Brancato and Michael Ferris, who also wrote David Fincher's similarly frenetic The Game -- should feel as dated as the expression "Where can I hook up my modem?" which Bullock literally says in this movie. Yet its terror still hits, perhaps because the idea that someone could access all your information via the internet and ruin your life doesn't seem that far-fetched anymore. But the thing you'll notice most about The Net when you re-watch it today is that it is weirder than you might remember, only not for the reasons you'd think. Join me in celebrating its 25th anniversary as I walk through why this '90s gem is so exhilarating and strange.

A floppy disk drives the action

While The Net's take on the scary invasiveness of the web is pretty spot on, its reliance on floppy disks is hilariously of its time. Angela's telecommuting job entails being shipped floppy disks with code for client video games and web pages via FedEx and then sending them back to the San Francisco-based company she works for. The McGuffin is a green disk containing a web page for a band called Mozart's Ghost ("The hottest band on the internet!") that arrives just before her first vacation in six years. Angela clicks on a pi symbol that turns out to provide backdoor access to various important websites. This causes her to become the target of an evil organization known as the Praetorians. Who are they working for? What's their plan? Angela doesn't know! But she'll need to find out if she wants to survive. While the movie's take on the all-consuming nature of the internet still mostly rings true, its devotion to physical media is now retroactively cute. Remember floppy disks? How cumbersome and useless! 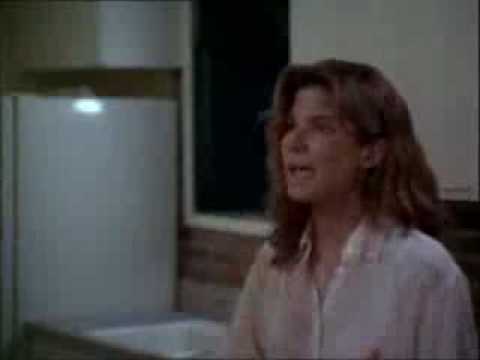 The most troubling part of the movie isn't the big, scary internet, but the profoundly depressing backstory of its computer-proficient protagonist. Angela is introduced as a young woman surrounded by three monitors and four keyboards. She spends her nights alone, sitting by a digital fireplace, ordering pizza online (see below), and discussing her vacation plans and her ideal love interest ("Butch, beautiful, brilliant -- Captain America meets Albert Schweitzer") with a stranger named Cyberbob on a message board called Cyber Chat. Her mother has Alzheimer's and has no recollection of her own daughter; her father left the family when she was young. She goes to Mexico on vacation and is seduced easily by Jeremy Northam's suave Jack Devlin, who clearly has other intentions. Pillow talk involves her disclosing her previous romantic history, and it's low-key devastating. Her most recent relationship, years ago, was with her psychiatrist, a married man who took advantage of her naiveté and loneliness. The movie charts Angela's evolution from wallflower to hero, but it also never lets you forget how isolated she really is.

Speaking of that psychiatrist, he's played by Dennis Miller, at the time known best as Saturday Night Live's Weekend Update host, and now known mostly as a conservative blowhard. Miller hasn't done much acting, so it's jarring to see him here, and in a serious role, at that. Admittedly, he's actually perfectly cast as Angela's sleazy mentor who continues gaslighting her even as she begs him for help. Plus his character's name is Dr. Alan Champion. But his last-minute redemption arc is unpleasant, and it's a relief when the Praetorians orchestrate his death via medical-record hacking and there's no grand romantic finish.

The AIDS crisis is shoehorned into the narrative

One thing I doubt you remember about The Net is how the AIDS crisis is used as a backdrop for the film. In the opening sequence, the Undersecretary of Defense commits suicide after receiving grim news. As viewers, we don't initially know what sparked his decision to kill himself, but we later see a new report that reveals the HIV-positive diagnosis -- as well as his public homophobia. This is not the only time AIDS is referenced, either. During the climax, there's an ACT UP protest happening outside the office where Angela gathers the evidence she needs to take down the Praetorians. These references to the disease that devastated the LGBTQIA community during this period are a cheap effort to connect "computer virus" to "human virus," but the visuals are legitimately disorienting.

Okay, but pizza.net, the cartoonish website where Angela orders her solitary pie at the beginning of the movie, still rules. The Net predicted Seamless and Postmates long before these things ever existed. Okay, Pizza Hut had tested an unrelated commerce site called PizzaNet in 1994, but whatever, it's still wild to see someone ordering pizza online in 1995. According to a recent oral (!) history (!) of pizza.net, the idea for Angela to get a 'za delivered via the web came from director Irvin Winkler. Pizza.net is delightfully vague -- just who is making this pizza? -- but also wonderful, and makes me want to order pizza right now, so I'm going to actually do that.

Angela is a normcore fashion legend

Everything old is new again, and I'm obsessed with all of Sandra Bullock's looks in this film. Big sweaters, crop tops, high waisted jeans. It's all back in style and I love it.

By now, we know to regard the people behind some of the tech's biggest innovations with skepticism. (Paging Mark Zuckerberg, Jack Dorsey, Elon Musk, and James McAfee.) But The Net was ahead of its time when painting its overarching antagonist as a public-facing yet somewhat sketchy figure. Turns out the orchestrator of all this malevolence is Jeff Gregg, the CEO of a company called Gateway that peddles security software to high-level organizations that actually makes them vulnerable to attacks. The message: Never trust anyone. Except whoever created Pizza.net.

When Angela is chatting with Cyberbob in a desperate moment midway through the movie, she's reading aloud what her Cyber Chat buddy is typing. So when he suggests they meet in person using popular internet shorthand, Angela helpfully spoonfeeds us by saying, "IRL. In real life." In a wild (and cinematic) coincidence, her anonymous internet friend just happens to live in the area, though, sadly, Cyberbob is later killed IRL by Devlin, thanks in part to the former's baffling decision to paste his chosen chat avatar next to his door buzzer outside his apartment building. Still, it's nice to be reminded occasionally that there was a moment in time when audiences didn't immediately know what IRL meant. (Unrelated but also presciently, Angela refers to herself as a "spineless simp" early in the movie.)

As highlighted in this short post-release trailer, Angela breaks down her predicament, and really, the problem with the internet, in a perfectly succinct way. Speaking to a disbelieving court-appointed attorney about the people who've stolen her identity and caused her to be arrested, she says, "They've done it to me, they're going to do it to you." She's definitely done hard time with Coast to Coast AM.

The Net was one of Carl Reiner's favorite movies