Finally, we learn how that combo came into being.

If you saw The Princess Diaries, Garry Marshall's 2001 adaptation of the Meg Cabot book, at an impressionable age, certain gestures became embedded in your mind as the epitome of romance. One was when a girl's foot pops up during a kiss; the other was a pizza studded with M&M's, a bizarre culinary touchstone that plays a crucial role in the climax of the film. Have I tried it? No. Do I think about it a lot? Yes. Does it sound good? Also no. But screenwriter Gina Wendkos swears it tastes great.

In honor of the 20th anniversary of Anne Hathaway's breakout role, I reached out to Wendkos, who, back then, was coming off her first feature, Coyote Ugly, when her agent sent her Cabot's YA novel with the idea that she should adapt it. She jumped at the opportunity, relating to the frizzy-haired, unpopular Mia Thermopolis. The movie transplanted the action from New York to San Francisco, allowing for hill-related car hijinks.

The pizza in question arrives via a long-bearded delivery man when Hathaway's Mia apologizes to Robert Schwartzman's Michael Moscovitz, the brother of her BFF for whom she clearly has feelings, just as the movie is ramping up to its conclusion. Mia, on her way to self discovery after learning she's heir to the throne of (the fictional) Genovia, has blown off and been generally rude to Michael. She realizes the error of her ways and sends him a pizza with the word "SORRY" spelled out in M&M's. The gesture is also a callback to a brief line of dialogue earlier in the film when Michael invites Mia on the sort-of date that never happens. She asks if there will be pizza and then adds, "With M&M's?" But instead of eating that M&M's pizza, Mia goes to the beach party with a popular boy who sets out to humiliate her for his own publicity. She needed to show contrition for ditching Michael, but had to show it in a way that specifically highlighted how they were meant to be.

"It was almost like they had this private language," Wendkos explains. "And this was the element that they shared that nobody else could. Everybody in the world sends flowers to say I'm sorry. People send food. People send cupcakes, but nobody sends that." 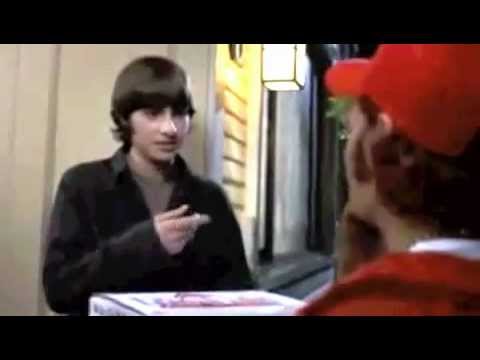 Where did the idea for the M&M's pizza even come from? Wendkos traces it back to her time working in the writers' room of the largely forgotten CBS sitcom Good Advice, starring Shelley Long and co-created by Mad About You's Danny Jacobson. She recalls someone ordering a pizza one night and a writer—a member of a team of two women—suggested that they add M&M's.

"Everybody looked at her like she was insane," Wendkos recalls. "And she goes, 'No, you've got to have M&M's on it. It makes it all the better.' So we ordered it that way and it was tremendous. Tremendous." (In retrospect, Wendkos believes the M&M's were probably already in the room and they were not supplied by the pizzeria. Wendkos also believes that Mia did her M&M's art herself before handing the pizza off to be presented to Michael.)

So when it came time to craft the romance between Mia and Michael, Wendkos figured the dish would be a perfect sign of their quirky passion for one another. Though she says she didn't play it that way, "M&M" also matches Michael's initials, as well as both of our lovebirds' first names. When she decided that the pizza would have a major role, M&M's had to pop up elsewhere in the script. In the movie when the audience first meets Michael, he has the candies scattered on his keyboard as he plays on his computer. "It became kind of a romantic theme between them, a signature," Wendkos recalls. "When you're in 10th grade and you have no money, how do you express passion? You're not going to go buy necklaces or rings. He's quirky and she is quirky."

But is the concoction actually tasty, or is Wendkos' fondness for it more of a nice memory? Wendkos insists that it is, and she will occasionally indulge when she orders pizza herself. The M&M's offer both a sweet surprise and a crunchy texture to a pie. "It's a great flavor," she says.