I Don't Love Appletinis, But I Love the Appletinis in 'The Social Network'

Ten years later, the neon green drink still looks great onscreen and says a lot about the beginnings of Facebook.

Alcohol plays a major, if subtle, role throughout the entirety of The Social Network, David Fincher and Aaron Sorkin's supervillain origin story about Mark Zuckerberg and the invention of Facebook. The opening scene takes place over beers at a darkened Boston-area bar. Zuck, played by Jesse Eisenberg, cracks a cold one when he invents Facemash, the predecessor to Facebook. But there is one beverage cameo that I haven't been able to get out of my head since the movie premiered ten years ago: the Appletini.

The Appletini appears during the crucial scene where Mark (Jesse Eisenberg), Eduardo Saverin (Andrew Garfield), and Christy (Brenda Song), Eduardo's girlfriend, meet with Justin Timberlake's Sean Parker for the first time. Sean swans into the swanky New York Asian fusion restaurant late, orders a selection of appetizers for the table, and then asks Christy what she wants to drink. She says an Appletini. Four of the neon green drinks arrive at the table, and they keep coming. 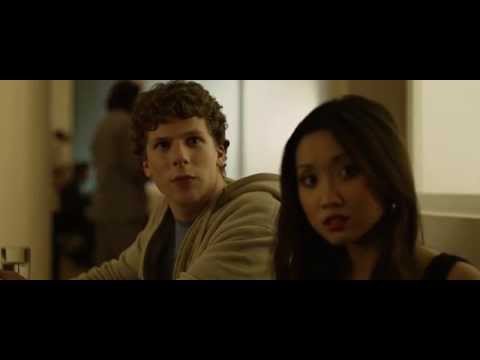 According to a deep dive into the history of the Appletini from Eater, the cocktail, which consists of vodka and Sour Apple Pucker, was invented in 1997 at Lola's in Los Angeles. Though it has largely fallen out of fashion, what with its tacky artificial flavoring that has no place in our craft-obsessed world, it would have been in its heyday in 2003 when this miserable foursome was boozing up. Christy nervously opts for an Appletini because she thinks it seems glamorous, and Sean Parker obliges because he's the kind of dude that would order an Appletini himself.

The Napster founder, as characterized by the movie, is the human equivalent of the drink. It's "cool" in quotation marks, just like Sean. He's slick, trendy, and sickeningly sweet in his approach to wooing Mark and Eduardo. He sounds good but he's also full of shit. You'll puke if you consume too much. If the old Harvard guard are sucking down martinis and Old Fashioneds and bottles of Dom Pérignon, this new wave is guzzling artificial swill that's the color of the nuclear waste in The Simpsons. It's an obvious symbol, but I'll be damned if the drinks don't sort of look tasty. It's appealing in the same way Sean Parker saying "a billion dollars" is appealing.

Since it came out in 2010, The Social Network has been picked over and dissected. I maintain that it's one of the greatest films, if not the greatest, of the last decade. Though it was criticized for its inaccuracy upon release, the movie is also eerily spot-on in predicting the menace Facebook would become. The real Mark Zuckerberg took issue with Eisenberg's cold portrayal of him as a vengeful, socially inept nerd, but over the years, Zuck's refusal to regulate his creation even when it has been used for ill has made him seem more and more like the fictionalized version.

As a document of its time period, The Social Network also works as a depiction of how power changed in the 21st century. The musty smell of Harvard final clubs occupied by strong-jawed men like the Winkelvii are no longer particularly alluring, shot like the stage for a Fincher horror movie. Once Mark invents Facebook, he creates his own path, independent of those old structures. It's pristine and shimmers with the gleam of Appletinis.

After the release, Zuckerberg went on record to say that he had never actually heard of an "Appletini" before seeing the film. (He did so during a Q&A in which he ignored some more pressing and prescient questions.) So, yes, the Appletini is almost certainly an invented moment by Aaron Sorkin. (The man is obsessed; there's also an Appletini moment in Molly's Game.)

There's a way to read the Appletini as one of the ways The Social Network belittles its female characters, which has been one of the persistent and not entirely unfair criticisms of the film. Sean turns to Christy for a recommendation in an act of slightly misogynistic suaveness, and she chooses an absolutely embarrassing drink. What does the Appletini convey? Is it that Christy is a frivolous girl who chooses a dumb drink? Or is it just that a college student would absolutely not know what to order to make herself look cool at a fancy restaurant? I choose to argue the latter, though I will hear other cases.

The Appletini is indicative of the magic of what Fincher and Sorkin pull off in The Social Network. It's obvious that it's not based in fact, and yet it just feels so right. There's an emotional truth to the Appletini, even if Mark Zuckerberg has never actually consumed one, just like there's an emotional truth to Facebook being an evil entity right from its inception.