The (sort of) sequel to 2016's 'Suicide Squad' is directed by 'Guardians of the Galaxy' filmmaker James Gunn. 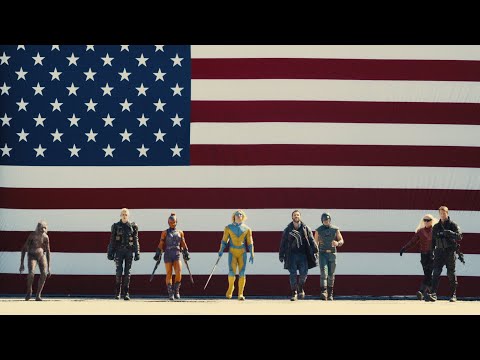 Gunfire, Pete Davidson, King Shark, the concept of a beach full of dicks, and a kaiju: They are all there in the first trailer for James Gunn's The Suicide Squad, the sort of sequel to 2016's Suicide Squad. The two movies, obviously, basically have the same name but Gunn has essentially retconned this team of misfits from David Ayer's universally loathed film. Some players remain—like Margot Robbie's Harley Quinn, Viola Davis' Amanda Waller, and Joel Kinnaman's Rick Flag—but the focus of the new trailer is on the newcomers.

The premise is largely the same: A group of bad guys are recruited for a mission and if they misbehave they get their heads blown off. This time the leader is Idris Elba as Bloodsport, who bickers with John Cena as Peacemaker. There's also, thrillingly, King Shark, the half-man/half-shark who is being voiced by Sylvester Stallone and both swallows a man whole and rips another man in half in this footage. Gunn, best known for his work on Guardians of the Galaxy, has also recruited some of his regulars like Michael Rooker and his brother Sean, who is once again embodying a furry creature in the form of Weasel. The villain they are fighting is the "kaiju"-looking thing: the alien starfish called Starro the Conquerer.

Gunn's take on these wily antiheroes is a sign of the DCEU's new direction, which moves away from Zack Snyder's original very serious plan for the films, now on full display in the Snyder Cut. Robbie's Harley Quinn has her energy from Birds of Prey, and there's already a spinoff starring Cena as Peacemaker character planned for HBO Max.

The Suicide Squad is out August 6 in theaters and on HBO Max.