Come for the lush island views, stay for the intrigue.

Early on in the first episode of The Third Day, HBO's gripping new Pope-less miniseries starring Jude Law, a young girl, named Epona (Jessie Ross), points out a pair of oversized puppets in a field. A group of residents cheerfully maneuver the large figures, unsettling in their design and terrifying in their movements, across the grass in a rehearsal for an upcoming culture festival on an island, where the young girl has lived her whole life with a relatively small group of like-minded residents. Law's Sam, a former social worker caught in an ethically dubious business scheme back home, is the perfect outsider, a well-meaning guy who can't be scared away by some truly freaky warning signs.

“You won’t believe what these people are capable of,” says Epona. If you've seen unsettling folk-horror movies like The Wicker Man, Apostle, or Midsommar, you might have a decent idea. Created by Felix Barrett (Off-Broadway's Sleep No More) and Dennis Kelly (Channel 4's Utopia), The Third Day weaves together a number occult reference points to craft its many mysteries. Confusion comes with the territory. Let's map out where this strange show could be going in the weeks ahead. 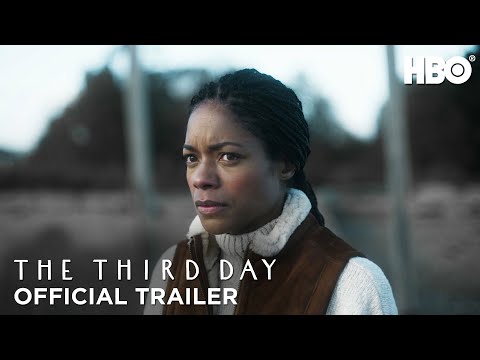 What is The Third Day about?

For all its structural and thematic ambitions, the first episode of The Third Day -- confusingly titled "Friday -- The Father" and presented as part of the initial three-episode "Summer" section of the series -- is relatively straightforward. Introduced via a startling close-up, Law's Sam chats away on the phone about possibly stolen money before putting on headphones, laying a child's striped shirt in a creek, and sobbing to himself. Soon after, he discovers a young girl, Ross's Epona, attempting to hang herself in the forest with the assistance of a curly-haired boy who darts away. After saving the girl, Sam decides it's his responsibility to take her home.

Home ends up being an island that can only be accessed by a road that's often covered in water depending on the tides. He drives her over and meets a friendly barkeep (Paddy Considine) who takes in the girl with his wife (Emily Watson) and offers Sam a room to stay in. Sam wants to leave -- he's supposed to deliver a bribe to a man back on the mainland -- but the island's eerily cheery residents keep finding reasons for him to stay and he wants to make sure Epona is safe from her gun-wielding father. Along the way, he meets an American academic named Jess (Katherine Waterson), who is there to observe the festival, and he ends up drinking too much at the pub, ending the night with a vivid hallucination involving dead animals and buckets of blood. Overall, not a great day.

Where is the island in The Third Day?

The misty setting of The Third Day is a big part of its appeal. The island is called Osea, and it's a real place off the coast of England, purchased in 1903 by brewing heir Frederick Nicholas Charrington, who wanted to build a treatment center to help people dealing with alcohol and opioid addiction. Considine's bartender provides a brief history of the island in the first episode and his origin story largely checks out. You can read about it for yourself and book a trip if you want to have your own hopefully less psychologically harrowing adventure.

What are the people on the island up to?

Clearly, they're up to no good! As soon as Sam arrives, spotting the puppets and the townsfolk playfully wearing masks, he should've probably turned around and left. The shaky cell phone service, the perilous road access, and the lack of traditional lodging options should all be red flags. There's no guarantee that Sam will be offered up as a human sacrifice, possibly trapped in a bear suit or swarmed with bees, but it feels like a very real possibility. “Most people are scared of pain," says Emily Watson's character at one point, providing just the right touch of menace. "They don’t don’t know how warm it can be."

What is the "live event" that's part of The Third Day?

At a time when many TV shows arrive in big streamable content lumps, The Third Day will have an unconventional, potentially challenging rollout. In addition to the first three episodes, presented as "Summer," three additional episodes starring Naomie Harris will be presented as "Winter." (The episodes will air weekly on Mondays on HBO without interruption.) On October 3, Law will take part in "Autumn," a live 12-hour theatrical event that will be presented online.

Like Sleep No More, which was produced by Felix Barrett's Punchdrunk theater company, "Autumn" will combine scripted and unscripted elements. "There is a very clear sense of what happens that day, because it's a day of this festival that the island has followed for hundreds of years, and there are certain stages that [the characters] have to accomplish for it to be a ritual success," Law recently told USA Today in an interview. "I've been working on that [storyline] with Felix for the best part of a year or so: talking it through and understanding it."

Will this event be necessary for making sense of the show's larger narrative? That remains a mystery. Given the length of the episode -- and its focus on rituals, traditions, and pageantry -- one imagines that the "Autumn" part of the storyline will be more supplemental in nature, like a number of augmented reality games that have tied into television shows and Hollywood blockbusters. But it's probably a good idea to expect the unexpected.

Should you watch The Third Day?

While the live theatrical event and the seasonal structure will certainly bring in some curious viewers, it's easy to imagine the structural ambitions of The Third Day turning off anyone just looking for the next Big Little Lies or The Outsider, more traditional HBO mystery miniseries based on popular novels. This show is certainly trickier and stranger. On a conceptual level, the bleeding into the real world aspect of The Third Day feels like the natural outgrowth of theory-inspiring HBO hits like Westworld and True Detective. Here's a TV show that can't be contained by the limits of a conventional miniseries.

But, at least in the first episode, most of the pleasures of The Third Day are proudly old-fashioned. Law's performance, which pairs well with his recent turn in the dark domestic drama The Nest, is uniquely suited to his gifts as an actor, playing on his roguish charm and his innate unknowability. When Sam discovers the rolls of money in his car towards the end of the first episode, you're not sure if you should be trusting him and he's not sure if he should trust himself.

Similarly, the writing and directing tinges many of the familiar genre elements with a wry sense of humor. (It helps that director Marc Munden gives what could be a drab island narrative a more vivid, colorful look.) Despite dealing with heavy themes surrounding grief and despair, the show rarely feels grim. By the end of the first episode, you might even understand why Sam decides to stick around.